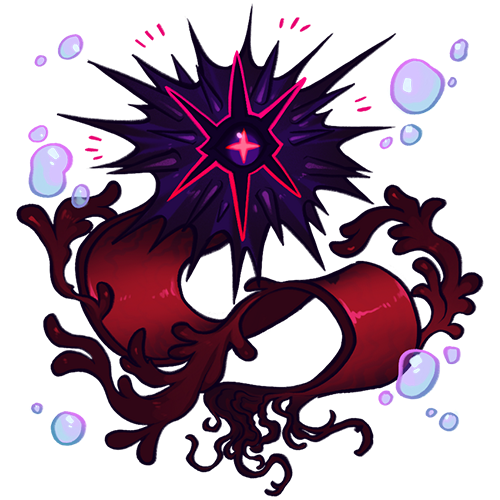 “We are all slaves to the waves of fate, some more so than others.” — Edivo, ethewe ascetic

Attack Method: Ethewe will curl up and flare out their spikes while waiting for someone to come defend them.

[Overlooked] Neutral trait
Our body that lays in waiting for the moment to strike.
[Tactician] Positive trait
Our mind that plots the course of the world.
[Obsessed With Control] Negative trait
Our will that leads us into a fruitless struggle.

Ethewe have an incredible number of gods, likely promoted by their belief that naming intangible concepts is the best way to gain control of them.

The physical appearance of an ethewe is somehow both incredibly strange and incredibly familiar. Ethewe are a type of aquatic plant. They have a long, thin, fluorescent body with small gripping roots at the bottom, one to five tentacle-like arms that branch out from the side, and a large bulbous head of spikes with a dark flower-like fan surrounding a single large eye. Although they are able to stand fully upright and stretched out in their natural habitat of the ocean, they do not have a great deal of body strength and hunch over greatly while dragging their arms on the ground should they walk on land. There is no definite color range for ethewe, although typically their spikes, roots, and fan are dark blue or purple while their body is more vibrant. Some ethewe may have bumps or buds along their body although for cultural reasons, most prune themselves of such features.

Ethewe spend the majority of their life migrating around, rarely staying in one place. Due to this, clothing is an essential part of ethewe culture, even if their frame is not strong enough for a great deal of it. Typical attire involves ribbons to signify any of their achievements as well as a loose scarf for retaining heat in colder places.

Since the dawn of their sentience ethewe have been plagued by their feeble physical forms. Huddled together in forests with other plants they did their best to hide even as they suffered as the bottom rung of the Polaber food chain. Slowly but surely a great resentment was born in the minds of every ethewe. Never again would they let the whims of the world control them. They would rein supreme above all else. And so this struggle still plagues every ethewe and, even more so, those they choose to exert their influence upon.

Ethewe are typically standoffish and reserved in manner. They are content to watch the events of others, and dip their hands into those affairs as they please, on their own time. Whether it is something as simple as what someone eats or a matter of life and death, ethewe consider all events of equal importance and worthy of their manipulation.

Some religious sects of ethewe are ascetics and willingly submit to the control of others, merely wafting around in the waves and spreading their teachings. Such matters are accepted by the other ethewe as a study upon the nature of control.

Due to various treaties formed surrounding the transmission of sensitive information outside of Architego, early ethewe history is unavailable for dissemination and exists solely in rumors and the history of other species. Brutal authoritarian measures are often cited, however the official depiction for the ethewe species history remains one of alliance-building and peace-keeping.

Ethewe run the majority of offices in the Exodud government, largely focusing on the sector of information and peacekeeping. No major excursions or notable events have been publicized outside of their role in Exodud affairs. Religious groups and ascetics may interact with others on occasion, however most have taken a vow of silence in one way or another. Frequently, conspiracy theories site ethewe influence as a compelling factor for major events, however these tend to disappear quickly.

Farsight: Through a combination of various lens-like eyelids, ethewe are able to see many miles with extraordinary clarity. Oftentimes this is compared to being able to see into the future, however this statement is entirely inaccurate, they are merely able to prepare for the things they happen to see well ahead of time.

• Ethewe still speak two of their natural languages: bubblespeak, where messages are communicated through pockets of air underwater; and a rudimentary form of starspeak, which they perform by blinking rapidly.

• Funeral rites for most ethewe leave the body intact and open to the elements so that they can still exert influence among others even in death, while their name is added to another ethewe's title.

• While it is not usually necessary for ethewe to disguise themselves so as to hide their influence, their most common disguise is a potted plant.