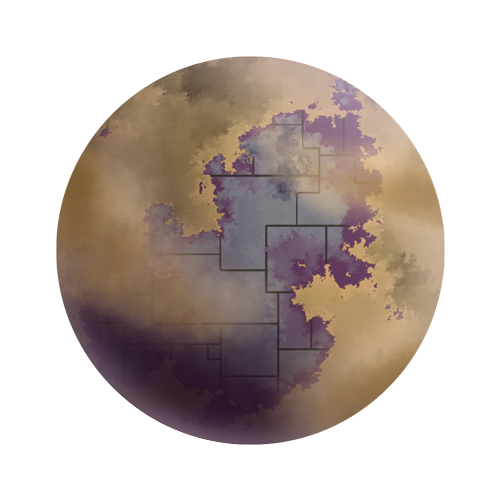 “Who even goes to Mypace anymore, wow gross man???” — Every tweep who doesn't live on Mypace

Tweeps have almost completely abandoned their home planet of Mypace as all of space just has so much gossip and news to see. As a result, they have become highly widespread. They tend to be couriers, reporters and other news-related jobs, while some become professional bloggers. The only tweeps on Mypace are ironically a part of the "Spacer" clan. The buildings of Tweep kind have been overtaken by nature and many confuse the planet for being abandoned; the only indications of tweeps still being on the planet are their songs.

When looked at from space Mypace looks like highly divided, with giant walls separating sections of the planet. Every section was a host to a clan, but as one can see now, parts of the walls have been torn down so that roads could be built. Mypace has a constant gloom of clouds that threaten to rain at any time, but rarely do. With the constant gloom and the aging buildings, many would say that Mypace is a depressing place to be, while those who love adventure find great excitement in traveling the ruins.

When tweeps first made their rise, they came together to agree that they should be split for their own good. The tweeps got in clans, and then soon built walls that covered the whole planet. Ages would go by until the great Social Wars would happen, and parts of those walls would fall. Clans broke apart, and soon the tweep had left their planet for the stars. Only one clan remained, the spacers.

The spacers tried their best to upkeep the planet and all the buildings, but every year the size of their clan would go down, due to those naturally dying and those who decided to finally follow their kin and leave to assist the universe. The spacer clan would slowly give up on trying to upkeep the planet for the return of their fellow tweeps and let things fall in to ruin. As news got out that their planet had become a dump, it became cemented that they would not return to it.

The spacer clan still lives on, but they have become nomadic, being the only clan of tweeps left. They sing songs on their trips around the planet, looting any goods they can find. Visitors who come to check out the planet may find themselves creeped out, as eerier distorted pop songs from years past can be heard in the distance if one stays absolutely silent.

Geo City: One of the largest tweep cities, owned once by the clan simply known as the geo clan. The tweeps of the geo clan were told they were to be free in thought, able to build whatever they wanted, as such the buildings in Geo City rarely match, each one different from each other. The geo clan had smaller sub clans in it due to how large the clan was, all flying under the geo clan flag. With the geo clan gone the most poorly built buildings have fallen, and many people who visit note all the highly strange animals who live in geo city. The geo clan was known for their generic experiments on pets, and now those pets roam wild, yet oddly tame, in the wreckage of Geo City.

Quespring: A confusing maze of a clan town, Quespring is a constant quiz show, ranging from personal questions, to names of tweep leaders. It is impossible to open any door without answering a question. For questions that are personal a highly advance lie detector will determine if one is lying or not. Due to how well Quespring was made most of the buildings and device still stand today. Some tweeps have made it an event to go to Quespring every few years just host a party and update the town with more universal questions, meaning that the town is completely up to date, even though it is abandon.

Scoopp: An area once filled with ideas, this clan area died before the Social wars. When tweeps from a nearby clan went to invade, they found a horrifying site. The whole clan was dead, and the area eaten by a fire that covered all of the clan's turf. The event clearly happened many years before anyone ever found it. To this day no one is totally sure what happened to Scoopp's and its clan. The tweeps of the clan were special in that they could not fly, but they could dig very well. Tweeps are willing to pay big money for artifacts from Scoopp, or info about what happened. The only document recovered so far details a great social corruption, a great object of power, and a clan leader willing to burn it all down to prevent anyone from getting to it.

• If one hears a song in the distance, one can sing back. If done correctly a tweep will swoop down to assist the singer with their needs.

• The spacer clan is not named for the space above them, but for the space they can hear people from. They are able to hear singing from miles away, and their songs can carry for miles as well.

-Back to Planet Menu-
< Mortembrosias
Naturis >