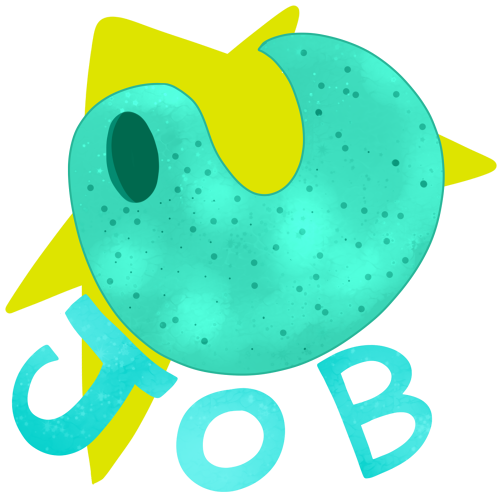 Common Jobs: Anything that doesn't require much speech
Likes: Drifting, Freedom, Travel
Dislikes: Being chained down, Overdone order, Being forced to work

Attack Method: Rarely attempts to attack. If they do attack they tend to turn in to gas to choke their enemies or warn the rest of the crew.

[Pacifist] Neutral trait
A character with this trait would prefer not to fight, and will almost always try to solve a situation in a nonviolent manner first and foremost. However, if that is what it comes down to, they will still battle to defend either themselves or others.
[Never Panics] Positive trait
When situations come at this character, they remain calm and collected. They are able to think clearly in nearly all situations.
[Lazy] Negative trait
This character dislikes working and will never go the extra mile. They also have a lower standard of what is too much work and may endanger themselves and others by cutting corners.

Tilde honor whatever they wish but they rarely if ever talk about it.

The tilde are gaseous beings that form into various creatures when they turn of age in their culture. They appear as fluid forms in differing colors, the most natural colors being different variations of primary colors, while secondary color hues are very rare. They tend to adapt the look or appearance of other races when shifting into a solid form.

Some species have classified the tilde as 'Living Stars', due to both their appearance and abilities. Being spaceborn species the tilde do not need to breath.

The tilde are gaseous in nature, and keep 'solid' forms when they find it desirable such as in the presence of other creatures, on spaceships, and on planets which find their gas-state unbearable or damaging, basically to interact with species beyond their own.

Tilde age until a certain point, at which they will suddenly have a "melt down" and blow up. This explosion is harmless to everyone around them other then being covered in their goop. The goop left behind will quickly become new baby tildes. Tilde do not known their parental units beyond arising from their remains.

Young tilde have no 'true' solid form, and continuously shift into forms they find pleasant or useful. For a young tilde to choose a certain species as their chosen form is a high show of respect towards said species, i.e. 'I admire your species form, intellect, or ability, and think it suitable to represent me.'

Once a tilde has picked a chosen form they rarely appear as anything else when in their solid and liquid form. In fact it can be a bit hard, but not impossible, for the tilde to change their shape to any other form. A tilde who has chosen a shape is considered an adult.

The tilde communicate through the oddly universal language of spaceborn species, starspeak. They cannot make sound beyond the occasional flare-up, whistle-like noise, or static crackling. Some tilde learn sign languages to communicate with certain species, while others never bother.

The tilde are known for their mischievous and child-like demeanor. They enjoy learning and knowing immensely, so much so, that they travel the universe seeking new planets and new life forms to learn about. Often young tilde join or sneak onto ships seeking adventure and the ability to join other creatures while learning about the universe. All tilde are known to enjoy a good non-life-threatening prank.

The tilde are known for wildly running through the universe and seeking other lifeforms, just because they enjoy what they've got, and don't see a need for physical objects, and find no interest in planetary conquest. They have little to no goals in life and just go with the flow.

The history of the tilde is largely unknown, due to the tilde being a migratory species that has no true use for physical objects, due to this their history has gone unwritten and untold beyond a few myths. One of the biggest myths about the tildes is that the first tildes were born when two stars went supernova and a third star was caught in the middle, creating the tilde.

Cycle state: As the tilde are made up of stardust, various gasses, among other things, they thusly may form liquid, solid, and gaseous forms. They are extremely handy in hostage situations, as they can easily escape from just about anything outside of a vacuum sealed chamber. Young tilde can appear as enemy soldiers or creatures easily, and might fool some primitive races.

• Different colored tilde may inflict different status effects in gaseous forms. This is why they take solid forms when interacting with other species, to keep from harming others. Tilde cannot inflict status effects on other tildes, or creatures that inflict similar status effects. 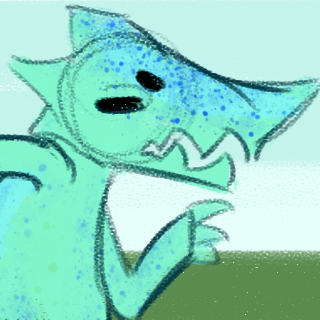