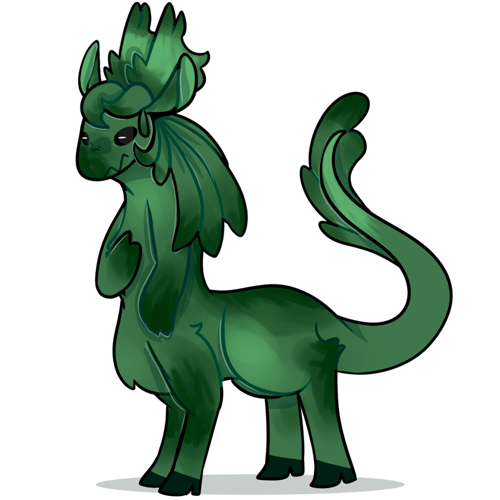 Attack Method: Use their hooves to stomp or kick, or simply run away.

[Private] Neutral trait
This character will commonly keep to themselves and gets a slight boost to production while doing so. When in a group this character will get a slight decrease to production.
[Perfectionist] Positive trait
This character is commonly hard-working and is unlikely to fail most of their tasks. This character is also careful with their work and makes less mistakes than most.
[Passive] Negative trait
Characters with this trait are unlikely to take initiative, and only do things when asked. They may prefer to stay away from action even in lieu of helping their team, and need to be specifically asked to do things that may seem like automatic or obvious responses to some.

The terrietes' beliefs vary from subspecies to subspecies, but the most common belief is that the spirits of the dead are housed in special carvings that commonly feature the history of or a defining moment in the spirit's life.

The terrietes are a centaur-like species who commonly resemble deer. Terrietes are almost entirely covered in short, soft fur. They have vine-like hair atop their heads, which they will often braid or style. Additionally, they have long whip-like trails that end in a tuft of similar hair. Terrietes are known to take very good care of their fur and hair, to an almost obsessive degree.

Terrietes have large, branch-like antlers. They will commonly decorate their antlers with things like flowers, vines, or wooden carvings. Complex antler decorations are a show of both status and skill.

The terrietes commonly carry a very regal aura about them, and while they're not exactly pompous, they hold themselves very high. They have tendency to hold grudges over even the most petty things.

Terrietes tend to keep their thoughts and emotions to themselves, as they consider such things as not meant to be shared. They see it as something they have to deal with themselves, as dumping their problems on someone else would be rude. Due to this, they might appear distant or cold to other species.

Terrietes are masters of crafting, wood carving, and gardening, things they extremely proud of. Their carvings, usually made out of wood or bone, typically feature things like landscapes, grand moments or stories, complex lace-like designs, and floral patterns.

Mountain Terrietes: The more goat-like cousins of the common terrietes that populate the more rocky regions of Naturis. Instead of antlers, mountain terrietes have more ram or goat-like horns. They enjoy decorating their horns using things such as carved rocks and precious metals. These ornaments are often more modest than their forest-dwelling cousins, but tend to feature much rarer materials. They are sparsely covered in smooth armor plating, which is fairly sturdy. In contrast to their forest counterparts, they have a rather gruff demeanor. They enjoy sparring with each other and they take pride in the scars gained through battle. Mountain terrietes commonly have very dull-colored fur and armor.

Malventus: The malventus really enjoy the presence of the terrietes but know to keep their distance when necessary. This is except for the cavern terrietes who they will gladly greet and speak with for hours on end. While the other terrietes are slightly standoffish or gruff toward the malventus, the malventus know that they are deep down yet another friend.

Ignalisks: The ignalisks were the first intelligent species the terrietes encountered. While the relationship was rocky at first due to the ignalisk's heat bubbles, eventually the two species established a solid trade pact. The terrietes find the ignalisk's singing somewhat endearing.

Nautalids: Nautalids and terrietes have a flourishing inter-species trade and commerce system. The nautalids will bring up corals and other sea minerals in exchange for land stones and metal. Though there are some disputes between individual members of the species, overall interaction is friendly.

• To lose their antlers/horns is considered the worst thing that can happen to a terriete. Due to this, they are quite protective of their antlers.

• The terrietes are quite fond of fairytales, along with anything related to them.

• Terrietes love rare materials, and are almost always willing to trade for them.

-Back to Species Menu-
< Telenova
Tilde >