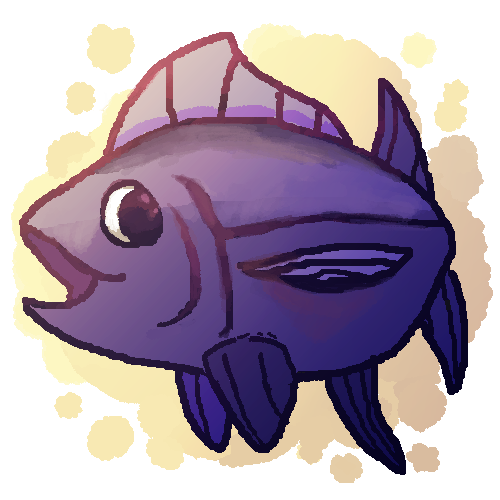 “I can see four tuna!” — Last words of a husse navigator

Attack Method: Run away. If cornered, try to push the assailant into something.

Space tuna are skittish detritivores that mostly try to hide away from other space creatures for fear of being eaten. They can live entirely off solar rays, though they mature much faster if they are able to eat dead space fauna. Space tuna rely on the brain power of other tuna and can only function and survive when there are three other space tuna nearby. Groups of less than four tuna die off and any tuna in a group beyond the first four will die off and get eaten.

This usually happens after the space tuna hatch and groups are formed, since space tuna don't always lay eggs in groups of four. Space tuna are hermaphrodites, and all space tuna in a group lay lots of eggs, but all except a small percentage of space tuna are killed and eaten before they reach adulthood.

Speedtuna: Speedtunas are a rare mutation among space tuna. They are extremely fast, and smart enough to function without other space tuna. This comes at a price, however, as speedtunas have a very quick metabolism and need to eat to survive. Most speedtunas starve before they reach maturity.

Fortytuna: Fortytunas are caused by an extremely rare mutation in a space tuna's digestive system. This causes them to eat the other three tuna in their group and assimilate their brains into its own, losing the need for companions. Fortytunas owe their name to their huge sizes, they can grow forty feet in length, can live much longer than regular space tuna and will hunt smaller space fauna. Their sizes make them very slow, however, and they rarely catch anything that isn't already dead. Because of their slowness and their huge size, some businesses hunt fortytunas for meat.

• Sometimes when Nemesis ships are badly damaged, their crew members start to get the desire to destroy space tunas instead of Fortuna. This is extremely embarrassing for everyone involved.