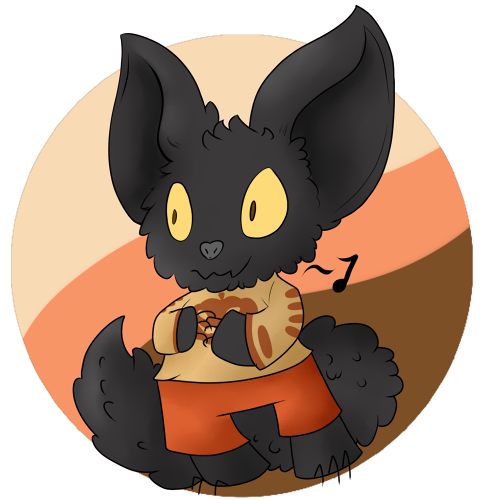 “No no, that is the wrong song! How could I forget these most important of sounds?” — Macciu

Attack Method: Running away, or using music to soothe or repel the foe.

Most Tockhau believe in the Singer and have many songs dedicated to her.

At 4 feet tall, the tockhau are considered short to most. They are covered in dark colored fur and have long bushy tails, though a large number of space faring tockhaus get them cut off. Their eyes are large and shines in the darkness, where they feel most at home. They have a very long finger on one of their hands with which they use to conduct with. They have large sensitive ears which move to hear sound better, as such certain tockhau concerts are set up to cause the crowd to form a "wave" with their ears.

Music is a significant part of tockhau culture. The tockhau are very quiet, until they are asked to play music. The tockhau are very passionate about music as well as other types of art and will do everything in their power to make a perfect art piece. Many tockhaus fall into a depression-like state if they're not allowed to make art or if the art they're making isn't good enough for them. Critics are a tockhau's worst enemy as the art they create is very important to them, so they see critique as a personal affront. While they understand critique is important, it's hard for a tockhau to ever be accepting of it.

While not all tockhau become musicians, all tockhau know how to play music, as it is a large part of their culture. Tockhaus are phenomenal musicians, and known as one of the best species at playing music. While they are usually not as smart as other species in general, their musical knowledge typically far exceeds that of other species, to the point where even an untrained average tockhau would be considered adept to other species. Due to this, tockhaus make fantastic conductors, as they know how music works. Some of the best bands in the universe are run by tockhau.

Tockhaus do not have a spoken language, instead communicating entirely musically, primarily through whistling. While tockhaus who leave their homeplanet are able to learn other languages such as Limlish, their first language continues to be their native one.

The tockhaus are very devoted to the Singer. They believe that the Singer blessed them with the gift of song when they were created, and see all musical performances as a way of honoring her and thanking her for her gift. Their religion inspires many tockhaus to be the best at music as they can be, in order to fully show how appreciative they are of her. They believe that the better the music, the more thankfulness you are showing to her, as you are using her gift to its fullest extent. Tockhaus become depressed after extended periods of not being able to play music partly because they believe this is squandering the Singer's gift. Tockhaus, while excited about the potential of the universe, can also get very nervous and overwhelmed, not knowing what to do or say. Music, the universal language, is the best way they can express themselves, and so they enjoy performing it. While most tockhau are excited to explore the universe, many find it too daunting and choose to stay on their homeplanet of Wockle, leaving the tockhau culture there relatively unchanged.

The tockhaus who live on their homeworld are a modern tribe who are content with their tribal lifestyle, and have not colonized their planet, meaning there are no buildings or structures anywhere on the planet, other than the small huts the tockhau live in. The tockhau are opposed to colonization as they believe the balance of nature should not be disturbed. They admire species who have learned to live in harmony with nature.

The tockhaus have been able to prevent colonization on their planets by other species due to a peace treaty with the prunus. The prunus offered to protect the planet in exchange for being allowed to live there. The tockhau agreed on the grounds that the prunus were not allowed to disturb the environment. As such, the planet is also populated by rooted prunii. Wockle is a popular spot for prunii to take root due to the vast amount of rich untouched soil, as well as the constant stream of lively tockhau music.

Tockhaus tend to be better at private work away from the rest of the crew, and are great at working with robots and AIs.

On their home planet, the tockhau are a prey species on the lower end of the food chain, and as such are frequently concerned with avoiding their predators. While they are fast, this was often not enough to guarantee survival, and in the primitive days of their planet, it was often a big struggle to stay alive. However, this changed when the tockhau discovered a certain grass that, when strummed, produced a noise that repelled their predators. Over time, this technique became the tockhaus' main way of defending themselves and as such, the species eventually evolved to the point where tockhaus were naturally born with a very long "strumming finger".

Although they were a weak prey species, the tockhau were the most intelligent life on the planet, and as such, as they continued to defend themselves with strumming, they began to develop more sophisticated ways to produce music, and build a culture around it. As they developed, they found new ways to play music, and learned how to induce certain behaviors in the native fauna with specific songs. They also developed a music-based language. Advancing as a species, they developed into a tribal lifestyle. While they became self-sufficient, they were not strong or skilled enough to colonize the land, nor did they want to, as they believed in living in harmony with nature. Their culture centered completely and totally around music, and the tockhau would revel in doing nothing but creating and performing music for entertainment.

It continued like this until their planet was discovered by a group of peaceful travelers. A small group of tockhaus decided to go off-planet with the travelers, to find out about what the universe had to offer. They were enthralled by all the new things they learned about, such as the religion, the instruments, and how it was like to live life free from the worry of predators. After their journey, the group of tockhau returned to their homeplanet to share their experiences. After hearing of it, worship of the Singer took on extremely quickly, and most of the tockhau were eager to leave the planet to experience it all for themselves. With the help of the travelers, a space station was built orbiting the tockhau homeplanet.

In modern times, the tockhaus of Wockle choose to continue living a tribal lifestyle. However, they are no stranger to technology, having assimilated solar-powered technology and modern inventions into their culture. While they don't produce it on the planet, as that would require factories, they import it from other planets and traders in exchange for exotic fruits and flora.

• Other than music, the tockhaus are all about self-expression. While they usually use music to self-express, they are interested in all kinds of art for this reason, and while music is important to all tockhaus, some tockhaus may not pursue careers in music, instead leaning towards careers in other forms of art such as painting or design.

• Tockhaus have many short songs that they play as prayers to the Singer, which they believe will bless them with positive effects. They have songs for just about everything, such as the Song of Luck, the Song of Healing, the Song of Determination, the Song of Suns, and so on. Sometimes, tockhaus will hold ceremonies with orchestra performances of these songs to honor the Singer and amplify the song's effects.

• Tockhaus especially enjoy the company of Hypnos AI's, and take delight in the songs they play. With practice, tockhaus are even able to teach Hypnos units their language, making them one of the only species able to effectively communicate with them. Many Hypnos AI's enjoy the tockhau culture and allow themselves to become immersed in it. Tockhaus usually take in Hypnos Ai's who have lost their Thanatos counterpart, as the tockhaus do not like the violent nature of Thanatos AI's. This is good for the Hypnos AI's as well, because it is a place for them to fit in after feeling lost from losing their sibling AI. 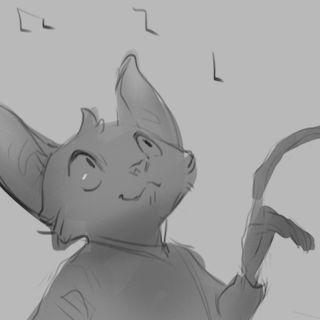 -Back to Species Menu-
< Tilde
Toreka >