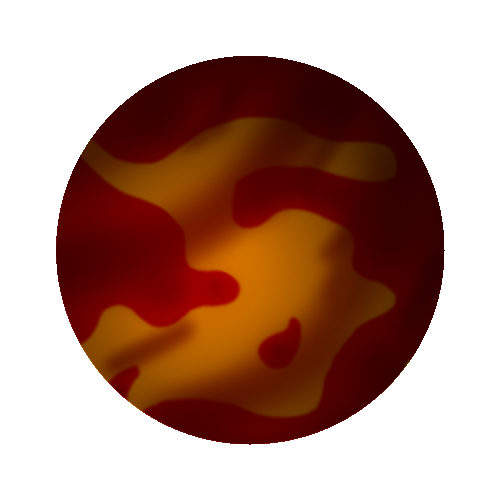 “All they do is fight, never halting, never even getting close to peace. Pitiful. UwU” — E-538

Brimstonair is nothing but a rocky and desolate battlefield. The planet is made of a dark red stone that can withstand temperatures of up to 2000 degrees Celsius. The pyronians use this material to create their fireproof weapons and prosthetics. The planet is covered in a large ocean of molten lava. There are two continents, one bigger than the other, and the lava ocean is dotted with islands. The only buildings on the planet are tiny shacks and campsites built by the smaller tribes, and massive fortresses built by the larger ones. Most of the surface of the planet is scorched from thousands of years of warfare.

Brimstonair is the site of an ongoing war that has lasted thousands of years. After a "god", most likely an average explorer, gave a king the secret of space travel, tribes began to develop. Then the war began. After hundreds of years, space travel became commonplace, but the tribes were so divided that they just kept fighting. Not much has changed on the planet besides more advanced technology and a few large fortresses, as no species is brave, or stupid, enough to try to end the war and colonize the planet.

Castle Tinflamor: The fortress of the Creation tribe spans over two square miles, easily the largest building on the planet. It lies in the center of the smaller continent on the planet. It houses a thriving town of soldiers ready for battle. Attempts to breach the castle are made daily, and while some get in and manage to kill a few pyronians, they never get far. Fuel is sold there, but as a sort of expensive beverage comparable to wine.

The Scorch: One of the less dangerous sections of the planet, the Scorch is a large patch of scorched ground that houses camps for exiled or offcolored pyronians. Most pyronians just tend to ignore it, as there's not much point in battling those who don't matter. Many pyronians that stay there are willing to take jobs on ships, because without wanting to fight, who would want to stay on Brimstonair?

Forge Isle: A small island near the south pole of the planet, Forge Isle houses the tribe that worships Our Forge, a unique tribe due to it being made entirely of gasfires. The Forgers often go on crusades to attack smaller tribes, and are happy to invite any extra soldiers along that visit. In return for help in battle they offer some of the materials from the tribes they defeat.

• A few species have attempted to mine the stone of Brimstonair for its fireproof qualities. These mines are now abandoned, as the pyronians ransacked most of them.

• Some pyronians say they've heard rumors that their god lives in the core of the planet.