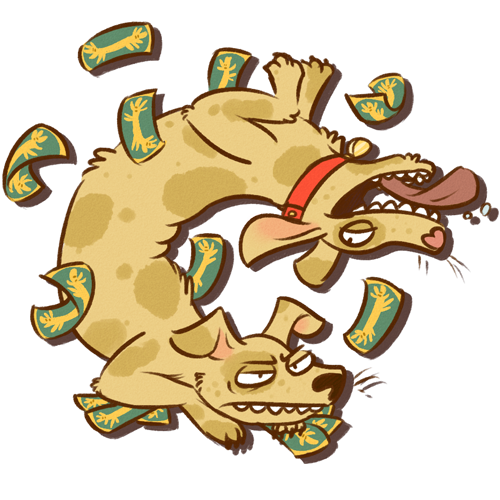 Homeplanet: Cashmoney
Lifespan: 50 years
Size: 3'6 ft tall
Diet: Speddaris eat everything that's not rotten but they like beans the best.

Speddaris do not worship any gods.

Speddaris look like dogs except that where their tails should be there is another dog head. They're usually surrounded by the large amounts of worthless floating money they control. It's common for male speddari to grow mustaches but there are plenty of males that don't and plenty of females that do. Speddaris don't normally wear clothes but they usually wear some form of neckwear like a bracelet, a collar or a ribbon.

Speddaris love to spend money. They often walk into shops, excitedly buying knickknacks for themselves and anyone who is lucky enough to be present, or walk into restaurants to order tables full of food. They will do this until they're broke and they often have trouble paying any kind of monthly or weekly expenses. In contrast to their fun loving nature in their off hours, most speddari are peaceful and businesslike while they're at work. Or at least their main head is.

The head on their tails is still excitable and will bark, growl and pant even though the main head is completely calm and serious. The speddari's tail head is not terribly intelligent and is basically a dog that can say a couple of simple phrases.

The Speddaris were a developing species with minor psychic powers when the first intergalactic monetary crisis hit. The geckrechauns, unaware that the speddari home planet was inhabited, chose to dump a ridiculous amount of now discontinued money on their planet. Rather than death by suffocation, the speddari were greatly aided by the mountains of worthless paper that fell from the sky. The currency and its strange iconography kicked the spedaris' psychic powers into high gear, making them capable of controlling the money and even regaining it if it was somehow lost. Speddari society flourished, fulfilling all their energy needs by burning money and allowing them to build almost anything out of cash. With no struggle for survival, speddaris began having loads of feasts and celebrations, and this mindset has carried over to the speddaris of today who still have trouble remembering that regular credits have actual value.

Reverse speddari: This speddari's smart head is on its tail. In speddari society this is the equivalent of someone having their face where their butt should be, and these speddaris are often rather depressed and self-conscious about themselves. Reverse speddaris' secondary heads aren't very in touch with their main head and reverse speddari will often kind of hide themselves behind their happy, drooling neck head. Reverse speddari aren't as generous as regular speddari and would prefer to save up enough to money never to have to leave their house again.

Currency control: Speddaris can control the worthless currency of their homeworld with their minds. This is how they interact with the world. If their money is lost they can regenerate it through a process they call inflation. A speddari without any money can't make new money out of thin air and will need financial aid to get it back. Because of this, Speddari have to be very careful to keep some of their money safe should it catch fire or be left out in the rain.

• Speddaris can eat with both mouths, and on formal occassions they will place a table over themselves and have their waiter scrape their food off their plates for them.

• While speddaris are good salesepeople, they should never be allowed to manage their own stock. They would just give away all their wares if it was theirs.

• Geckrechauns just love that the speddaris give their money away and speddaris will often have a few gecks that hang out with them and find stuff for them to buy.