Trick of the Light / Charming Clockworks 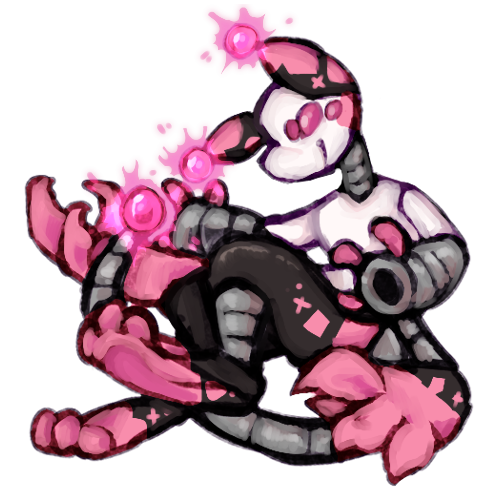 “...And if you see something shining in the mist, something soft and inviting, don't you dare approach! You never know whats on the other end of a warm glow.” — A tour guide of the umorus home planet

Attack Method: Umorus will attempt to pacify or scare a target before attacking, and then use their large lower claws to slash and punch their enemies until incapacitated.

The umorus do not hold as a species, particular values towards gods, though some take to worshipping the Helper as they view it as seeking aid for the Waking Years they had to endure from some unknown origin.

Umorus are tall, bottom-heavy bipedal creatures with six eyes, two sets of arms, the lower of which being much larger, and three jointed legs that end in paws. They possess metallic spines that run outside their bodies, acting as the only visible part of their skeleton, and have long tails that end in shining orbs/growths, similar to the orbs that protrude from the tops of their ears. These orbs create light and can be utilized to create patterns or flashing bright spots to confuse or intrigue.

They are slimmer around the waist, with patterns that cover them resembling the playing card suit diamonds, or sparkling symbols. These symbols may be mutated to display different symbols, or lack defining shapes altogether. The umorus typically come in a trio of colors; one a light base, a darker tone, and a bright accent around their markings. These colors may be switched around depending on where they are raised. Multiple parts of their bodies, specifically related to flexibility or requiring precise movement, are made of metal, much to their detriment for their actual flexibility. Their top arms have small openings that can either shoot out a clockwork slime or exude gasses to create illusions to those who inhale them.

The umorus are tricky folk. Their flashing lights, their shiny colors, down to their sparkling markings, these creatures seem built for showbiz. They're charming, and have the physical capabilities to confuse and astound-with the natural subtle psychic illusions these creatures employ, the crowd work and engagement of an umorus's natural conversation is excellent. They value the ability to put on a performance and successfully either bewilder or intrigue, as either reaction from a basic survival scenario is ideal. Making sure a potential threat or friend is pacified is integral to the basic instincts of the umorus.

They have a tendency to seem off putting when not in a state of being the center of attention, as naturally, the physical capabilities that allow them to thrive in an urban setting evolved from a more gloomy and all-around creepier environments. This can appear as intrusive habits, trying to understand their environment better as well as the people who inhabit it with blunt methods. When not focused on being likable or a threat, the conversation skills of the umorus are lacking. Clumsy casual words do not befit the sparkling performance of the physical form they put on, but at their most comfortable, the exaggerated illusions and charm are not needed.

As a particularly safe strain of clockwork, the umorus disdain the reputation that precedes them, but utilize it as a defense all the same. While it is a double edged sword, balancing the ability to be feared as well as create social connections, they find themselves most comfortable in the company of fellow (safe) clockworks.

The history of the umorus does not match their bright, performative state of today. The clockworks began on the planet of mystife, a gloomy swamp teeming with predators. Their survival as a species depended on adapting, so their evolution to slowly mimic hallucinogenic plants and glowing fungi or fauna allowed the umorus to protect themselves from the naturally hostile ecosystem. They were fairly prosperous on their planet, harvesting fungus and taming fauna, as well as building their own rudimentary forms of society. As they grew as clockworks, consuming the raw metal deposits of the land and refining the process of implementing it into their bodies, they grew closer to each other to share techniques and understand themselves.

Then, the planet flooded. It came about extremely suddenly, and with little chance to prepare. The substance that flooded the already swampy planet was seemingly high in caffenation, which led to a horrible period known as the Waking Years. The umorus were forced to drink from the diluted water until the rains that has been so scarce the previous years diluted the strange murky substance to safer and more tolerable levels. The greatest impact of the Waking Years was persistent insomnia due to the caffeine intake daily, and those who could not stomach it died out. The umorus regard most caffeinated drinks, especially coffee, as dangerous and a reminder of their suffering. They avoid it at all possible chances.

Mystife is a gloomy swamp planet. Its natural aura is misty and humid, with a very volatile ecosystem. The creatures and plants that evolve there usually need to fight for their place within the food chain, evolving tricky tactics to survive long enough to establish a presence. Their home planet is very minimally urbanized, with just a few cities mostly set up for trade and shelter.

The planet is mostly flooded, with little in the way of dry land left outside of a few mountains or hills teeming with plantlife. Flora has prospered, with various bioluminescent mosses or fungi feasting on the remains of the history of the planet, and the fauna have learned to all around avoid the ground for fear of what lurks in the muddy waters. It is most aptly described in mood as haunted, and is not advised to be visited outside of nostalgic trips home for those originating from it or research purposes.

Agedys: The agedys subspecies is a horribly sad malfunction of the umorus line. These umorus are born with no growths or orbs to be bioluminescent from, and instead are constantly alight. Their skin, their eyes, even poking through the metal of their joints, the agedys are walking nightlights. This is considered a great failure of survival, only perpetuated by the fact that umorus can live off of their home planet now. Agedys typically are regarded as more awkward or reserved, since they lack work with perceptions due to the inability to control their lights or concentrate them. Agedys may be regarded as more trustworthy than their orbed counterparts though, since they cannot influence others as easily through their hallucinogenic gas alone.

Prysms: The prysms subspecies are the pinnacle of controlled and coercive bioluminescence the umorus species can create. A prysms is set apart from their typical umorus by the colors and shape of their glowing growths. Typically, they are shapes in sharper angles, such as stars or triangles, and multicolored with separate facets of individual tones, from 2 colors up to 5. These umorus have skinny bottom arms, as they are reliant on their glowing to act as a defense mechanism. They are most commonly found on their homeworld, as their specialized functions make them the ideal survivors.

• Umorus's fashion sense is very in tune with whatever planet they touch down on. Very few grow attached to a style as more than a means to garner looks, though. A traveling umorus will try to match the styles that seem most popular wherever they head.

• Umorus hold a strong dislike of species who have evolved to lack or not need vision anymore, as it renders them as suggestive as an agedys, and an umorus never likes feeling like they have lost the upper hand.

• The plumari and umorus share a great relationship as species. The umorus find the fellow harmless clockworks to be great travel companions, especially due to the unique circumstances of each one's evolution from rather worrying home planets.