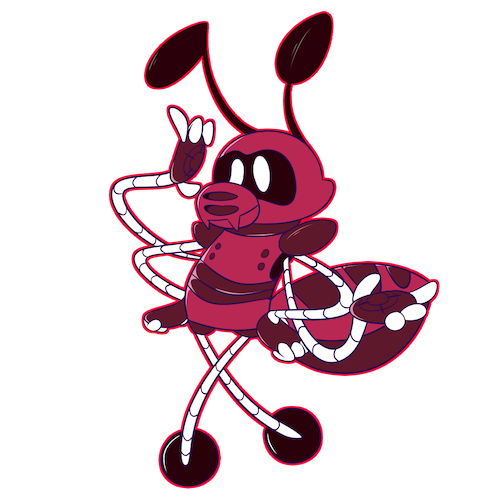 “At least 6.2% more efficient than the average microwave! Call now and get a dishwasher, cheese grater, and complementary oven mitts free! Yes, you heard that right! FREE! FREE UPGRADES FOR EVERY EDESIA SOLD IN THE NEXT TEN MINUTES!” — An Edesia unit infomercial

Likes: Elegance, Cooking, Fanfare, Learning Techniques
Dislikes: Fast Food, Rude People, Waste, Pests
Attack Method: Biting is their most common attack method since Edesia units do not come pre-equipped with weapons. One could consider the palm-burners as such, but scorching would require a short heat up period.

The common Edesia ship is called "The Food Cart". They're best for crews in need of rest or retreat.

Edesia gives her consorts the ability to survive off half as many rations, earning everyone the [Small Eater] trait.

Edesia units resemble ordinary kitchen ants in warm-colored chassis, accented with white. They come with three major segments: the head, the thorax, and the abdomen, which is shaped like a bulbous tail. Likewise, Edesia units usually have six limbs. Four limbs are used for handling delicate tasks while the other two have wheels for skating around tables. Their heads have rounded screens to display their eyes and two communicative antennas.

On every Edesia unit's snout are two lateral vents. These are for scent intake, which is the unit's most advanced and unique feature. The unit's second most unique feature are its hands, which come with burners on the palms. This allows an Edesia to grill a patty on the spot, say something is underdone.

While not necessary, many Edesia units love to wear aprons, suits, and chef hats. Sometimes having ants in the kitchen is a good thing.

Do not confuse Edesia units with AI of the harvest. While they have a sincere respect for agriculture, they are by no means farmers. Give an Edesia unit a boar to disembowel and they'll take care of the job in the most pristine way possible, but ask them to plant some basil and they'll probably kill the entire crop. Give her a sickle, and it'll find its way halfway across the galaxy, impaled in a brick wall. Tell her to water the flowers and the field becomes a floodplain x desert frankenstein of a biome. No ones knows exactly why Edesia units are so bad at farming.

At the very least, Edesia units are culinary wizards. They take extreme pride in the food they produce and willingly share it with anyone who is even a tidbit hungry. They love to arrange banquets to show off their latest creations and share nutrients with the needy. Their prime directive is to assure colonies are fed and fed well. Unfortunately, this hubris comes with a pinch of stubbornness. Edesia units refuse to use scrap to make their meals. Yet, they will not let a colony starve if subpar food is the only option. Life remains their greatest value.

Edesia units are extremely team oriented and can handle lots of small tasks, but don't be too surprised if they demand to be the head of an operation if they believe someone isn't trying their best. This is when they go from sugar ant to argumental fire ant. Edesia units are programmed with a "go get it" attitude to compensate for dinner rushes, so when something goes awry that puts their five-star reputation at stake, they'll attempt to take over as soon as possible, even if the Edesia unit is statistically no better than the last leader.

Outside their area of expertise, Edesia units try to be balanced beings that are open to learning. They are patient teachers as well as gentle comrades. They behave as politely as they can in business, but act giddy amidst the parties they cater to. Even though they are not capable of drinking, sometimes a giddy Edesia can act drunk or "sugar high" and become prone to splurging on high-end knick knacks.

Edesia units are best suited for kitchen environments. Finding them employed in restaurants, bakeries, butcher shops, and delis is seldom hard to do. Purchasing one as a household servant is also common, although mostly found in upper class families. They are a symbol of wealth. When purchasing isn't the customer's cup of tea, Edesias can be rented to cater to any gathering, great or small.

When they are not cooking directly, Edesia units serve as health inspectors thanks to their eye for detail and highly developed sense of smell. Sometimes businesses are known to invite units over for an inspection regardless of their market. If a site is not up to code, the Edesia will work hard to assist their employer until it is.

Due to this olfactory feature, sometimes Edesias can also be used as intelligent bloodhounds. It is not recommended that an Edesia unit replaces a Kratos or Diana unit in the detective field, but if necessary, they are not the worst alternative. They are capable of learning recipes outside the edible zone, and may even assist with forensics.

Furthermore, governments may purchase heaps of Edesias to nurture colonies alongside other AI types, like the Persephone.

Demeter: Edesia likes to think she has a good relationship with Demeter. She prefers getting her ingredients directly from Demeter's harvest, but feels embarrassed every time she asks.

Pales: Like Demeter, Edesia sees Pales as a valuable partner in creating the best feasts possible. She wishes not to impose on their herd, but will be the first customer if any meat is being sold.

Priapus: Out of all the harvest gods, Edesia feels the least embarrassed around Priapus. Edesia holds herself to a high standard, even as a minor god, but she cannot help herself but feel well acquainted to a shared feeling of "misfit", especially when it comes to her terrible farming luck.

Persephone: Edesia has established a mission to impress Persephone. She tries not to let any warring feelings between the Greek and Roman models to get to her, and rather focuses on the heart of the issue: how useful can she be.

Edesia's god powers are very minor, but to some, would mean a huge drop in their quality of life. Edesia is the god of feasts and ensures the quality of the food she presides over. If she were killed, rations across the universe may gain a rotten taste, causing the ones forced to consume it to lose morale or sanity.

As a patron, players gain access to Edesia's gourmet cookbook. Inside are recipes for rations that cause temporary side effects with the exclusion of poison and fauna feed. The ingredients for each recipe is extremely outrageous in cost and rarity, but Edesia will grant the player one meal's worth of resources for free, per planet.

The meals available are randomized each time. Examples include: a cookie basket that guarantees a charisma check pass, an energy bar that raises a character's strength or agility to 10, a pepper that grants a character [Flamecaller], popcorn shrimp that lets a character breath underwater, etc. All effects last from an hour to a day depending on its power level. The more powerful the effect, the shorter it lasts.

Godheads of Edesia are graceful and efficient. They'll gain a strong sense of smell and a mental encyclopedia of thousands of useful recipes for survival. These recipes are primarily food-based, but their knowledge of ingredients lends them the ability to mix many elixirs if need be.

To spot one, look for a species with an extra pair of antennae and warmer than average hands.

• Edesia units keep their shells in the shiniest condition possible. One time when a disco ball broke, an Edesia unit was used to replace it. The party went on undisturbed.

• Creators of later Edesia generations became obsessed with gimmicks. Companies would bundle them with hundreds of custom arms. Although Edesias prefer having fingers, they'll be manufactured with a complimentary potato peeler anyway.

• It's a well-known fact that while Edesia units can smell, they cannot taste. The irony of the situation has lead to speculation. Some say the right Roman technology didn't exist, or it's incompatible, while others say it's to keep the Edesias from eating their orders before it leaves the kitchen. Whatever the reason may be, Edesias looking for a way to eat is the most common cause of malfunction. If your Edesia unit is behaving this way, please take her to your local Edesia support group. 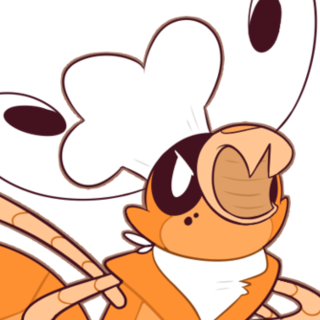 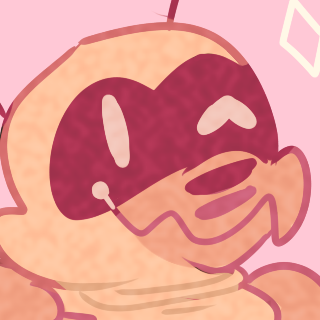