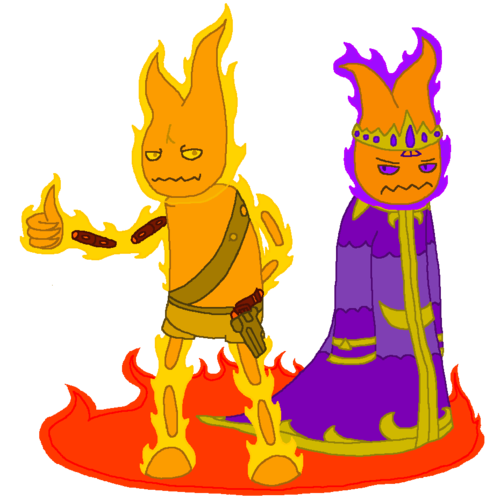 “The other tribes will bask in the glory of Our Creator. All they need is a little force.” — Jark Tinflamor XIV

Attack Method: Pyronians attack using either their favorite weapon, or if they have no weapon on hand, the burning energy surrounding them.

[Competitive] Neutral trait
This character tends to be up for healthy challenges. If this character sees a co-worker or someone they see as a rival working harder than they are they may work even harder to compete with this person even if this person has no idea what they are doing or even if they exist.
[Confident] Positive trait
This character is confident in what they do and rarely ever doubts themselves or the people they believe in. They're able to trust people and can raise the morale of people they trust.
[Hot-Headed] Negative trait
Although a character with this trait might be normally friendly, it does not take much to provoke them. If you prod at or question their beliefs, ideas, or otherwise challenge them, be prepared for them to lash out. A character with this trait can have trouble taking criticism well.

Pyronians worship hundreds of thousands of gods, all going by the naming scheme "Our (variable)". Various gods include Our Illuminant, Our Forge, Our Watcher, Our Scribe, Our Unseen, and Our Chaotic, to name a few. The first and largest tribe worships "Our Creator", a god who is said to have split up society to protect the secrets of the Creation tribe.

Pyronians are beings that appear to be made entirely out of fire. Their physical bodies are orange, rubbery, flexible, and are made up of 14 segments: a head, a body, four arm parts, four leg parts, two hands, and two feet. Some pyronians have a rare disorder that makes their body color different than orange, like magenta or blue. The head of a pyronian is split just above the forehead, creating two horn or hair-like spikes.

The segments of a pyronian's body are held up by a flaming telekinetic aura. This aura emits more heat the more telekinetic force is exerted, meaning that healthier pyronians tend to be hotter. This also works the other way around, and pyronians can temporarily "power down" their aura to emit very little heat, usually around their palms when holding flammable objects. This aura is powered by the pyronian's blood. If enough blood is lost, limbs will become disconnected from the rest of the body or the aura could fail altogether, killing the pyronian.

On the forehead of a pyronian is a rather simple symbol that can be any color besides the pyronian's body color. The color of this symbol dictates the color of the pyronian's aura and blood. Nobody is sure why pyronians have these strange symbols, but many xenobiologists theorize that the symbols are related to their minor telekinetic ability.

While uncommon, it isn't rare to see pyronians with some form of mechanical implant. About one in four pyronians have a replacement for one of their segments, a mechanical eye to help with vision problems, a metal plate on their body for protection, or various other modifications.

Homeworld pyronians have a relatively primitive social structure. Every pyronian on the homeworld is part of a tribe that worships a certain god. There don't appear to be any physical differences in members of different tribes at first glance, but pyronians are usually able to tell whether another pyronian is a member of another group through some sort of sixth sense.

Each tribe is at constant war with each other, causing pyronians to be very hostile and competitive by nature. Many tribes are technologically advanced, using the magma all across their planet to generate power for their guns and rocket launchers, but some tribes are much more simple in their ways, using mere bows and blades. The largest tribes have entire kingdoms that wage war on eachother, which can cause the smallest tribes to be caught in between the battles.

The vast majority of pyronians off-planet tend to be more peaceful. These pyronians have either rejected their war-torn planet or been born someplace without constant strife. Due to their natural senses, however, they can still be overly emotional when faced with stressful/violent situations. Some tribes have taken their conflicts to space, meaning that travelers and explorers may get caught between two warring spacefaring tribes.

Both legends and historical records say that pyronians weren't always split up into tribes. Pyronians used to be a relatively docile species of tinkers and hunter-gatherers, forming groups to search for edible plants, hunt down Brimstonair's incredibly heat-resistant animals, or invent new weapons. However, just decades before being discovered by the notails, the entire dynamic of the species shifted. What was once a peaceful, if rather emotional, species became characterized by one of the longest wars in the universe.

Trustworthy historical records from here on out are scarce, as manipulation to fit a tribes' religion has to be taken into account, but evidence points to Jark Tinflamor I as the instigator of the millenia-long conflict. From a young age, Jark had an interest in battle and warfare which quickly evolved into an obsession. Despite this, Jark was raised to become the First Pyronian King, a title which he would use to start a small cult around a god named Our Creator. This god was said to have given Jark hidden knowledge about the world in exchange for his eye. Other cults started to spontaneously appear, growing into tribes, and a massive war began. Soon after, the planet was discovered, and the hidden knowledge was revealed by the Creation tribe to be the technology for space travel. The war slowly spread across the entire planet, turning it into a heated battlefield.

Despite Jark's presumed death, the war has been going on since the AI era. The Creation tribe has remained the most powerful pyronian tribe, yet oddly enough, has never even come close to overtaking the others.

Petrolian: Petrolians, also known as gasfires, are a subspecies of pyronians whose telekinetic abilities are far more powerful. Their stronger auras give them more endurance and intelligence, at the cost of their strength. Almost every tribe has at least one petrolian in it. Petrolians are sometimes in positions of power in their tribe, like kings or generals. However, most petrolians prefer to control from the shadows and merely influence their tribe's decisions through trickery and wit.

Pyroflame Aura: Pyronians have a short-range aura of flaming telekinetic energy. This energy holds up their bodies and keeps them alive. These auras can be easily disrupted by water, causing possible dismemberment or death if left untreated. However, if they access a heat source soon after getting wet, they may recover. At the cost of 5 fuel, pyronians can drink gasoline, empowering their aura to get a minor temporary endurance and agility boost. Pyronians are immune to being hurt by fire, obviously, but aren't immune to plasma or the heat of a star.

• Less competitive pyronians are often employed as cooks due to their unique ability to burn things yet also control their heat output.

• Pyronians sometimes have strange obsessions with items that look like their symbol. This is especially noticeable in pyronians with weapons for symbols, as they will always use that type of weapon in battle when possible.

• Pyronians with an unnatural body color are often shunned by their tribes and sent off-planet. Some tribes, however, see these pyronians as holy. 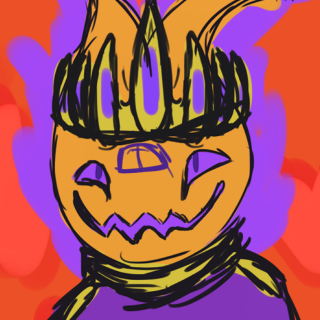