The terrors in the depths of space / Anglers 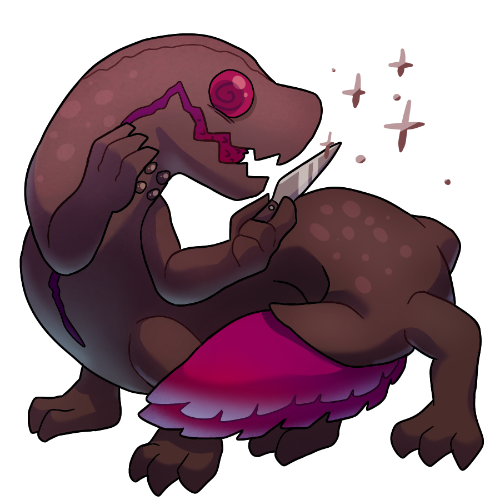 “Everything in the universe was fine until the fucking loqam came along!!!!!!” — A notail with no sense of irony

Attack Method: The loqam will simply attempt to consume its target as if it were food. They always try to strike first, from deception or ambush.

The loqam wear the gods of their victims on their skin.

A loqam is a many-limbed species, with 12 pairs of limbs along its long and slightly flattened body. Each of these limbs is capable of both being used as a handed arm or a leg, with needle-like grippers on each's tip, allowing it to both move fast and low in a scuttling run . Their leathery-skinned body is split along the sides into an upper, harder piece and a lower, softer one, with the exception of their frilled tail that is entirely uncovered. This tail is the weakest part of the loqam and one will typically tuck it behind them so that the rest of the body is between it and any potential attacker.

The 'head' of the loqam is one of their most striking and noteworthy attributes. Whilst at first glance it might seem that this species has a swanlike neck with a head atop, this is in fact nothing more than a deceptive trick. The large eye-like patterns on top are lures to sell the deception - the truth being that this entire head and neck is the mouth of the loqam, formed like a head to make it seem more approachable and friendly to potential prey. When said prey approaches the whole structure splits into three grasping jaws filled with deadly teeth, ready to seize and shred anything and any one that places itself within their reach. The real eyes are typically kept on the bottom of the fake head's jaws, meaning they will often appear to have a "haughty" expression, looking up into the air slightly to grant a better look to their cluster of hungry eyes. It should be noted that these eyes cannot see color variation at all, viewing the world in mono-chrome.

The typical loqam, feared by lonely travelers the universe over, is possessed of a curious personality. They do not have any qualms with killing and eating those who are not their close kin but are also far from mindlessly violent or hungry. Their motives are uncertain, but whatever they may be it clearly isn't a matter of life and death, as they reserve great time for song, dance, and play. The songs they sing may be those a prior victim was forced to teach them and the games they play may be uncompromisingly brutal or unfair, but they enjoy them well enough, and seem content with this.

Whilst the loqam pirates have no qualms about launching surprise attacks on even the most well armed opponents, they are easily spooked and in the face of determined opposition will suddenly cut losses and withdraw, leaving any of their comrades mid-boarding action behind. At heart they are ambush predators who prefer the weak and helpless as food, but they also have less primal reasons for attacks. Loqam will carry out raids not only to eat crew or steal goods but also to carry out what can only be described as a cross between cruel tricks and experiments. These are rarely lethal but are always baffling and extremely distressing. These range from things as extreme as kidnapping and cloning their victims while duplicating their memories in order to release their unknowing doubles into society, to ruthlessly attacking every ship of a specific trading company to drive them out of business, to just straight-up cutting the engine out of a ship but leaving everything else intact. They seem to enjoy watching the ways in which other species react to high-stress circumstances, perhaps as a result of their obvious stalker-predatory heritage.

Though commonly believed to be omni-aggressive it is known that at least some ruthlessly enterprising volkronn have attempted with moderate success to establish trading with individual groups of loqam, exchanging all sorts of goods behind the backs of customs officials and police.

Loqam that have been raised away from the mysterious culture of their species' origins have a very different outlook, and disavow with horror almost all loqam misdeeds. Usually called "Stranger loqam", they largely adopt the culture they were raised with, with one notable exception - eating people alive if you were just going to kill them anyway. They inherently see this as natural even if they have been taught doing it is morally wrong by their adoptive culture, just like the more typical loqam.

Nobody is quite sure when the loqam first made their way onto the universal stage. Ever since space ships were available to people heading out into the depths of space there have been unsavory types and predatory criminals lurking to see what can be taken from those less wary. Bandits of the stars, robbers, pirates, whatever you choose to call them, they are there. But the loqam are by far the most infamous and hardest to eradicate of them all. Pirates usually stuck to the traveled lanes of space, places where large amounts of trade existed to steal, or around settlements where at the least a reliable source of victims could be found.

But at some point people began to report strange pirates of an unknown species in the most bizarre of places. On the other side of newly-opened portals, or in near-empty systems on the edge of space. In bizarre vessels of unknown design, these pirates would lure in ships by feigning distress, but as soon as the ships made contact, they would be swarmed by strange aliens. This was the first era of contact with the loqam, and while few actually died, many lost all they had and were forced in turn to call for help from others.

While it was initially assumed that this was just activity from a local new species that would soon be discovered and made to reign in this pirate epidemic, the truth was far stranger. No evidence of a home world was ever found, and the frontier of loqam attacks simply moved to wherever the edges of well-traveled space were defined. Ship crews began to recognize the design of loqam ships on sight and avoid them, but when the rate of successful attacks became too low, they changed tactics.

Instead of being robbed of cargo and released, ships began outright disappearing, their crews never to be seen again. But the ships themself would, as they were used as trojan horses for the loqam to lure in new victims who believed themself safe. In response to several huge attacks, cries rang out across the universe to finally do something about this menace, and a punitive expedition was organised with many ships.

While numerous prisoners were taken, none seemed to know anything whatsoever beyond their mission, and simply taunted their captors when the location of their home was demanded from them. Though unproductive in its original goal, the expedition did calm down the raids, though to this day they have remained a pestilence that haunts all the uninhabited fringes of the universe, ensuring that nobody with any wits travels without weapons in the void.

The homeplanet of the loqam is wholly unknown. Many attempts have been made to find it as the known regions of space expand, but all have been utterly unsuccessful. This has led to the rise of theories about how suspicious it is the loqam have been in contact for so long and yet no trace could be found, and which suggest they may have been around in space far longer than is officially thought...

• A loqam can contort itself to squeeze through any gap larger than six inches across. This ability is often used to hide inside the air ducts and vents of a seemingly-abandoned ship.

• When exposed to large amounts of water, loqam secrete a massive amount of hydrophobic slime to try and keep dry.

• Stranger loqam will almost always name themselves after a song or a line from a song that is dear to them. 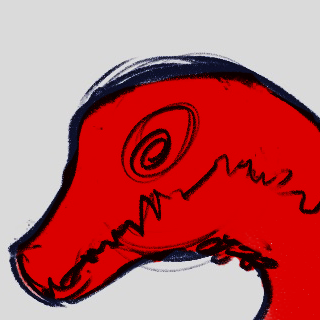