Herald of Dark / That Bastard 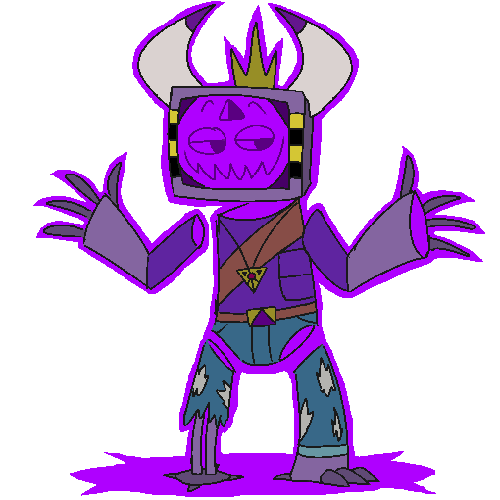 “I've got more anomalous items at my disposal than most K-classes could ever dream of! I'm the absolute greatest! Fly on over and give me a visit if you ever want a little anomalous spice in your life! Now how's THAT for a quote?” — Tezcats

While at first glance one could easily mistake Tezcats for a modified Apollo unit, his custom-built shell is unique in quite a few ways. The most notable of these differences is that his limbs and head are separated from his body similar to a tegyp. Holes at the ends of these pieces of his body glow brightly with magenta-colored electromagnetic energy that keeps him stable. Another difference is that, instead of a typical monitor for a head, Tezcats has a much thinner tablet screen.

The screen of Tezcats' head glows a bright purple, with a darker purple fading in at the corners. In the same shade of purple, two shifty eyes sit above a sharp and crooked grin. Tezcats' eyes almost always seem half-closed, as if he's too tired to fully care about what's going on around him. Above his eyes, in the center of what would be his forehead, is the symbol of a triangle split in half down the middle, possibly to represent his tegyp heritage. The tablet of Tezcats' head is lavender, with four black and gold stripes going from one side of the screen to the other across the back. Two sharp horns protrude from Tezcats' head. Although it may look from far away like they're coming from the topmost corners of his head, they actually emerge from the back, since his tablet head would otherwise be too thin to support horns. A thin crown made of pyrite is attached to the top of his head with superglue.

Tezcats can always be seen wearing the typical tegyp explorer uniform, a purple golf shirt and a pair of worn-out blue jeans. Tezcats cut this outfit into pieces to allow for easier movement of his limbs, attaching the pieces to his limbs and body with adhesive. Every part of his body that isn't covered by clothing is painted the same lavender as his head. Although he has a storage hatch on the left side of his torso, Tezcats likes to wear a leather belt and shoulder strap for extra storage in emergencies. Tezcats' limbs all end in four sharp digits except for his right leg, which ends in a flat obsidian mirror that gives off a plume of steam. Tezcats seems to have no issues walking with it. A triangular amulet embedded with dark red and purple gemstones is taped around where the base of Tezcats' neck would otherwise be.

To customers opting to buy his archaeological services or anomalous items, Tezcats has been described an amicable and enthusiastic (if slightly sardonic) robot. To those who happen upon him in most other situations, Tezcats is seen as a sarcastic and overconfident nuisance who refuses to follow any rules or orders in favor of doing whatever he wants. When these descriptions were given to him, Tezcats simply nodded and said "yeah, those both seem right."

Because he was built to track down and collect anomalies, Tezcats feels incredibly comfortable in some of the strangest situations and places in the universe. Both his birthplace of Mendac-Ium and his current home of Rapacity are extremely dangerous planets rife with anomalous fauna. In addition to collecting them, Tezcats is genuinely passionate about anomalies. He believes that all anomalies are unique and interesting objects that should be catalogued and utilized to their fullest potential instead of contained in a box to never see the light of day. As a possible byproduct of this belief, he also dislikes any religions that express hatred towards the gods. He claims that the gods are, at the very least, just misguided in their negative actions. A notable exception to this is Ebb. Tezcats is "glad that lawful hardass got what he deserved".

Despite the fact that his current job fits the exact purpose he was built for, Tezcats is seemingly in a permanent rebellious teenage phase. He rejects any and all forms of authority, whether they're rules in a library or intergalactic law. His list of crimes would be incredibly long if he didn't commit most of them in the lawless Ninthircle system. He also often mocks authority figures, posting satirical memes about them on social media platform or making snide comments any time they come up in conversation. Tezcats' hatred of authority is likely influenced by his creator, Opaq Darkling, a major authority figure on Mendac-Ium. For reasons neither party is willing to go into, Tezcats and Opaq had a major disagreement resulting in Opaq disowning Tezcats, who was legally classified as his son.

Tezcats is self-admittedly self-centered. He can often come off as rude in conversations that don't interest him, and can get bored easily with repetitive tasks. When conversations do interest him, he shows much more enthusiasm and positivity. Notably, Tezcats seems to be more easily irritable late at night, likely due to a lack of rest. Tezcats has said that he's trying to get over this flaw, but appears to have not made any progress with this goal at all.

Tezcats was originally built 166 years ago by the tegyp Sub Vice Presiking, Opaq Erbius Nebri Darkling. Opaq was obsessed with anomalous objects and wanted to build a robot who would want to help him collect and steal anomalies from across the universe. Because he was built by such a famous tegyp, Tezcats is known as the Herald of Dark on Mendac-Ium, a nickname that only fed his ego. At the age of 15, Tezcats began to rebel against Opaq, going on his own missions and collecting anomalous items for himself.

One year later, on a mission to recover a human artifact from Earth's moon, Tezcats went rogue, going against the mission protocol and flying somewhere else to find some different anomalies. The first thing he did was fly to the Ninthircle system, a place infamous for its lawlessness and widespread anomalous phenomena. What happened after this is unknown. Tezcats was found a week later on Earth's moon, his memory backups of his time in the Ninthircle system enti͟r̷ȩl̛y çor̨r͟upted̕.

Although Tezcats wasn't able to remember what happened, it appeared that he hadn't come out empty-handed. His inventory was full of small anomalous trinkets, and around his neck was the triangular amulet he now appears to treasure. However, Tezcats did come out with some damage to his shell. One of his feet had apparently been cut off during his escapade. Tezcats was immediately rushed back to Opaq, who repaired Tezcats by grafting one of the more flat anomalies he had on hand to his leg. This anomaly was an obsidian mirror that constantly emitted a small, harmless plume of steam. This mirror has since been modified into a form that can more easily be used as a foot. When asked why he chose to repair Tezcats with an anomaly, Opaq simply shivered and offered up the common tegyp proverb "Never question the inevitable, for you will anger both the stars and the void."

After Tezcats recovered, strange things began to happen far more often around him. Odd events are common on Mendac-Ium, but these things kept happening even after he had left to start his own archaeology business. Blackouts would become more common in his vicinity, shadows would appear near him without any source, and those with a strong hatred of the gods would feel an unease around him, avoiding him at all costs. Some say that Tezcats was likely blessed by an unspecified Limbo god while on Ninthircle, rumors that even he can't deny due to his corrupted memory.

Despite these rumors, Tezcats was able to start Finderz Keeperz, a surprisingly successful archaeology/anomaly collecting business. He and a crew of other adventurers would go to ancient planets with frequent anomalous activity, take whatever artifacts they could find, and sell it all to the highest bidders. Tezcats typically goes on these treks with four of his friends: a darknidow, a soothal, a tegyp, and a fourth person who seemingly doesn't exist. Tezcats established Finzerz Keeperz on Rapacity, the planet of greed in the lawless Ninthircle system, a place specifically designed for selling illegal items, and as of yet hasn't been arrested or hunted down by any government organizations.

Benedicto Tenebris: Presumably due to the anomalous augmentation of his leg or the blessing some say he was given, Tezcats has the ability to manipulate darkness around him. Unfortunately, he appears to have very little to no control over this ability, causing random anomalous phenomena relating to darkness to occur wherever he goes. These events can range in severity from a slight dimming of electric lights to temporary blindness given to everyone within thirty feet. Tezcats typically only experiences one abnormal event per day.

• Tezcats has stated that his name was originally meant to be an acronym, but he's long since forgotten what it was supposed to stand for. According to notes Opaq procured from the abyssal memory cube sitting on his fridge, T.E.Z.C.A.T.S. stands for "Tachyonically Elusive Zenithal Creation for Artifact Thievery and Stockpiling". After he was told this, Tezcats responded by saying he thinks it should have stood for "Totally Epic Zesty Cool Awesome Tubular Stud".

• Tezcats has, on numerous occasions, attempted to contact v1 AIs by offering up anomalous items in exchange for their time. This only worked once, with Tezcats getting himself a spot on Nyx v1's popular game show in exchange for a constantly-screaming cowboy hat. Given that his primary focuses are anomalies and himself, Tezcats' interest in v1 AIs strikes some people as odd. Tezcats has stated that he feels an odd sense of "magnetism" towards them and wants to get to know them better. Apparently, he and Nyx v1 have become close since the game show episode aired, sending each other memes constantly.

• Although he claims that he doesn't care much about what happened in the Ninthircle system during the week he forgot, Tezcats frequently explores planets in the system, looking for the rumored hidden tombs housing the remains of the Sinful Lords darknidows worship. In addition to this, the amulet he wears matches descriptions of the one once worn by Azelium, the Prideful Heir millennia ago. Tezcats hasn't been seen without it in the century and a half since he acquired it. To an outsider looking in, it would seem as if Tezcats was subconsciously obsessed with finding out the truth about that week.

-Back to Legendary Menu-
< Testudatlan
The Hunter >