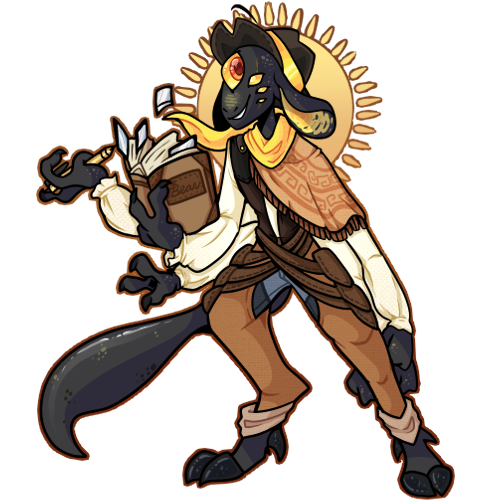 “And one day, when I was just being no-one, someone told me to be kind. So I've jus' been tryna be that. Kind.” — Beau

Job: Cowboy
Likes: Guns, A good talk, Dancing, Travelling, Ridable fauna
Dislikes: Staying too long, Diluted alcohol, Bandits
Notable contributions: Beau has been recognized from popping up through the universe on random expeditions with wild ends and confusing entrances, with no real destination to his travels.

Beau is a tall zadrixes, with bright yellow eyes. He has a long scar running across the left side of his face, and another hidden under his shirt that seems to span the entirety of his upper chest. He has a sturdy form with some solid muscle, but an overall flexible form. Beau doesn't pay much attention to keeping pride in his appearance, but he wears what he likes.

He wears a long scarf, and a majority of his clothes look as though they've seen better days. His vest is simple tanned leather with the shirt underneath it being worn and now more off-white than actually white. He has a brownish-tan poncho usual for his species that drapes off more to one side of his body. Most importantly, the holsters for pistols at his sides, with one for each arm, all hold a strangely unfitting gun to the man one assumes Beau to be in different ways.

Beau is a bright fellow, simply exuding simple country kindness from his actions and manner of speaking. He always seems to find himself a partner in travel or a pal at a bar no matter what planet he resides on, and is always up to share a story of his daring escapades. The kind of guy many comment is too nice to be in his line of work with strange company, or far too naive to have survived this long.

He loves to share in the revelry of his old adventures and even more so in some friendly competitions, especially honorable fights. He's quick to defend others and has a knack for roping in the wrong company, not that he can't handle himself, as he can keep a cool head to engage in a classic showdown or a spur-of-the-moment gunfight at the bar, with scary accuracy.

Beau is a traveler of planets, lands, and various areas on a journey with no meaning, other than the meaning it brings those who witness it or come along for the ride.

Some notable adventures, as described in great detail and excitement, by Beau when asked include assisting a clockwork hunter in clearing out what was left of her old town and family, traveling into deep mines with a lone excavator to find a mythical gem to bring prosperity to his mining company that ended in a death-defying escape from a large boulder, and working as security for a lone diplomat in a desert region to secure trade with a strange creature residing deep within the sands.

We were stuck in a cave, waitin' out a sandstorm. The winds can howl like wolves at night, you know? It's terrifying, Specially when you're in a cave you're sure some malicious fauna's just waitin' to make a snack out of you in. We had been travellin' from town to town, each of them deserted aside from the occasional scavengers or clockwork beasts. The lady I was travellin' with, an aftik woman, was the saddest person I ever saw. Not sad in that she would cry her eyes out, but sad in that she killed those creatures as if it was all she could do. So, that windy night, when we were saddled up next to a small fire, and she was lookin' off with those sad eyes, I had an idea. I would tell a story, a simple one, and use that there campfire to make shadow puppets. Jus' like an old soothsayer would do when I couldn't focus on the tales. And that was it. Those sad eyes didn't seem as sad. In fact, she moved her own hands against the flames and added to it. Soon, it wasn't just my story, it was hers too. An' she laughed. I'd never seen her laugh.

It was a bit like the adventure we'd been goin' on. She was alone, but a little bit of light brought somethin' new to her. When the storm was over, and our expedition around the planet was finally complete, she wanted me to have her gun. Said she couldn't kill with it no more, that she was tired of it. Course I took it, and I still have that here pistol on my side, second one down on the left. It doesn't shoot as well as a new one, and it's a bit rusted from wear, but it's the best one I've got. Cause it means she ain't killin' anymore. And that means she ain't so sad anymore.

He hasn't always been the kind fellow he is now though. In an interview, Beau laments about his old life. He was never special, just violent. He was looking for purpose and found that in violence asked for by supposed friends, or on instinct, or to survive. That simple cycle of reaction and loneliness was numbing. Then, it changed with a simple command. When someone asked him to be kind did he, well, be that. The change was almost immediate, and it makes one wonder if he truly is the man he presents himself to be.

Each One's Special: Each strange gun that adorns Beau's holsters are from someone he has met along his journey and found a deep connection with. From friends to colleagues to drinking partners to lovers, if they've met and he'll miss them, he insists on trading a pistol. To keep a part of them with him, to keep them safe while he's away.

This has lead to him accruing a mismatched assortment of firearms, some old and worn with battle, some seemingly handcrafted, and some clearly bought new just to give away to him. Each one's special, as each one holds a story and a piece of his life from this moment on.

• Beau can shoot well with any of his six arms, presumably from a lot of training, but for some reason, his favored arm is the second one down on his left.

• No one knows where all of Beau's original six set of pistols has ended up, as they've been scattered so distantly around the universe. They can be identified, if found, by a distinct scale inset within the handle. 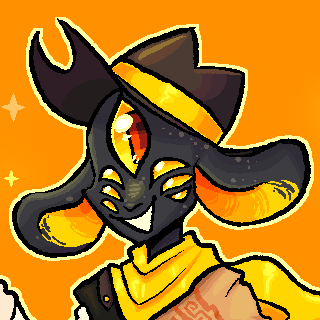