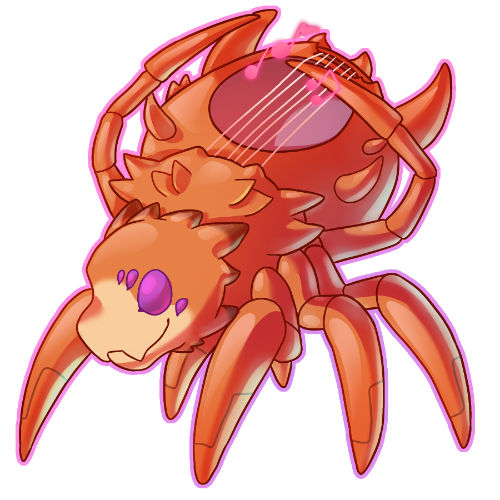 “We shall mourn the dead in the afterparty.” — A putley in melodico controlled space

Attack Method: Stun an opponent with electric shocks then bite into them with poisonous fangs.

[Hivemind] Neutral trait
Melodico are linked to the control of a nearby queen, and only the most powerful of individuals can break free from this control.
[Ultimate Acrobat] Positive trait
Being extremly weak the moment they are born, melodico use their small frames and extreme speed to out maneuver any opponent.
[Cannibal] Negative trait
Melodico can and will eat sentient creatures. The queens understand the fear this brings.

Free melodico speak of a powerful god like spider being that even the queens are controlled by, but most believe in no god.

Melodico are similar in appearance to most other arachnids with their segmented body, eight limbs, and small head with multiple eyes.

The melodico have a distinct soft fuzz under their head, and bestial designs on their bodies to scare away larger creatures. Their coloration can vary quite a bit, but light colors are rare.

Their abdomen have a hollow well set into them, which they cover in webbing to create a natural chordophone. These wells can produce sound like an instrument, but it also gathers electricity for a melodico to store. The melodico can release the electrical charge at a later time.

The majority of the melodico keep to themselves, hiding among the shadows and other dark dreary locals of the universe. To any onlookers stumbling across a melodico during the night, the only thing they would notice is the glow of their eyes, and the occasional spark of electricity jumping from their bodies. They keep their attention on any and all creatures under their watchful eyes, following the will of their queen to find the most powerful creatures for use in bringing forth more melodico.

What personality the average melodico might have is hidden by the control of the queen. These queens have control over any melodico within their range, which can be countries or entire planets, based on the age of said queen. They hide away, using their many children to hold sway over any they have in their web.

There are melodico that have been able to break the link to their queens, and these are much more charming and personable in comparison.

All melodico can only speak in hisses, but they strum the strings of webbing on their well to speak other languages. The free melodico use this to sing and dance, trying to charm those who fear their more hiveminded kin.

These free melodico also use their webbing to weave wonderful works of clothing and art, trading around the galaxy as they experience what others create.

Because of this, most end up as shopkeeps, or the occasional guard, allowing themselves more freedom of travel. Many species are still wary of any melodico, since where there is one many more hide in the dark.

Melodico were once a harmless pet of a much greater species upon their homeworld. The ruling species messed with the genetics of creatures on their planet, which was a source of great amusement. Made to be akin to electric guitars, the melodico gained the ability to gather and store electricity. Using this, the original melodico began to grow in power, and over time killed off the ruling species. They killed any beast that stood in their way and shrouded the planet in a web of their kin.

For thousands of years the planet suffered, the fauna of the plant steadily becoming meeker as the queens killed off the strongest of their kind to raise more of their own brood by laying eggs within those they killed. During those years, the melodico learned to use the machines of their creators, manufacturing their own ship to travel off world. With these vessels, they began to spread the influence of their species, finding more planets to ensnare and control.

During this time on their home planet, the dobro species managed to kill one of their queens with the help of a melodico who had absorbed the memories of the dobro it was hatched in. This resulted in helping the dobro species enter the universe and changing the melodico queens' stance on how to deal with others.

This event could not have come at a better time for the melodico, as the Federation finally got in contact with them. The queens had a change in ideals. Instead of being a roaming plague killing whatever they could, they become protective oppressors. After all, one gains more powerful targets by protecting them and giving them hope rather than crushing them down into nothing.

Elemental pots: Melodico with machines installed into their wells. These machines will either harness a melodicos electricity to create another element, like fire, or will store elements for use, like gathering water. Due to the process of how these machines are installed, elemental pots have less control of their webbing then the average melodico would.

Earth shapers: Stronger than most of their kind, earth shapers have little claws on their legs that allow them to grip at dirt and stone. While less impressive to the rest of the universe than their elemental counterparts, they don't seem less impressive when slamming a rock over one's head.

Queens: The melodico queens are massive beasts, the oldest and most powerful reaching the size of entire cities. The queens rarely come out, and their massive size makes their voices deafening and unintelligible. They can directly control almost any child they produce. At least one is hidden in any planet within the melodico territory. They rarely, if ever show themselves, unless a truly worthy creature threatens them.

Web control: Melodico are able to directly control the movement of their web through their electricity. While they can store a powerful shock, its main purpose allows them to easily shape web, catch prey, and even take flight if conditions are right.

• Through evolution melodico have gained a trait to snatch survival instincts from a creature they are born within. This allows a melodico to know how to survive the moment it is born.

• This trait does have an issue though. If a host has a strong enough will and refuses to die, their memories will be imprinted onto the melodico born from them, and this melodico will believe it is that person. Most believe their soul transferred to the melodicos body.

• Living in melodico controlled space is safer than most locations in the lawless sector. Melodico do not steal, tax, or force people to stay. They even kill any pirates bold enough to threaten their people. All they take in return are the strongest of ones species, by force. 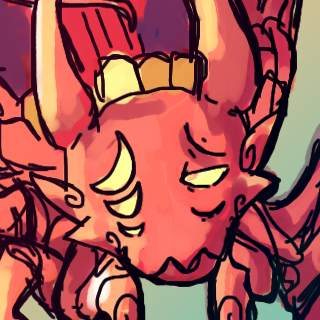 -Back to Species Menu-
< Marsue
Messenger >