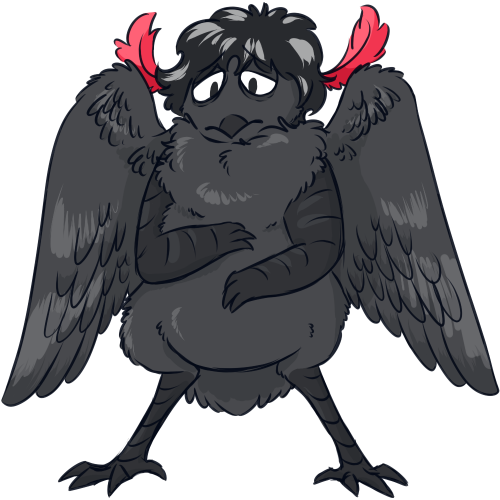 Attack Method: Skittish, tends to attack from the shadows or not attack at all.

[Cautious] Neutral trait
This character will be more nervous of suspicious situations, and less willing to take risks. They may put extra effort into making sure everything is safe before feeling comfortable. While this normally makes things safer for them, it can also be a huge time waster.
[Protective] Positive trait
This character is likely to know when things are going wrong with anyone they're protecting / anyone on their team. A protective character will defend them whenever possible. Endurance obtains a slight raise when the protective trait is active.
[Easily Startled] Negative trait
This character is easily scared by various things such as loud noises, bright lights, or even their own thoughts about what might be up ahead. Not only does this character lose morale and sanity faster then most, they'll likely freeze up when a startling event happens.

Jerce do not commonly honor any gods.

The jerce has a bipedal form that is covered in downy gray feathers. In place of hair, they have thin stringy feathers, which are always black in color. Their beaks have degenerated to simple keratin-reinforced lips, and their small eyes look like black voids. They have branching tendrils that grow out of the backs of their heads which help detect wind currents, and can be any color from red to fuchsia. Their hands have three fingers, with one of them being opposable. Their feet, however, are structured like those of a chicken and have four toes.

Their wings can reach a wingspan 6 meters, and are usually black, gray, or a mix. They are about 4 feet tall as an adult.

Jerce are typically skittish, and will jump at sudden appearances or loud noises. They take a while distinguishing from ally and enemy, as they were practically abducted to the space age from a competitive tribal lifestyle.

The Jerce first were a semi-civilized race with a tribal lifestyle. Things were relatively peaceful, only with the common stresses that come with tribal life. Recently, however, a group of rogue robots discovered their planet and found the Jerce as well. The Jerce were evicted from their planet, and they did not take very well to the rapid lifestyle shift to a spacefaring race. Most of them died, but many were taken in by ship crews and are now uncommon throughout the galaxy.

Flight and keen eyes: Jerce can fly with great skill, their wind-sensing tendrils allowing them to take advantage of whatever updrafts there may be. They have excellent sight, and can spot small details from a kilometer away. Jerce have to eat half their body weight in meat every day in order to sustain their flight.

• Jerces are rare and some consider their tendrils to be delightful decoration. This has caused an issue with people forcefully snipping off their tendrils to sell. Some jerces have decided to cut out the middle man and just snip their tendrils themselves, not only for money, but for safety.

• Jerce prefer settings that are dim, making sure not to include too many bright lights from multiple sources. This prevents an abundance of shadows from being cast.

• One's own shadow ranks among a typical jerce's greatest adversaries and fears in daily life. 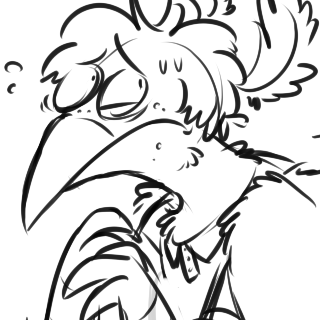