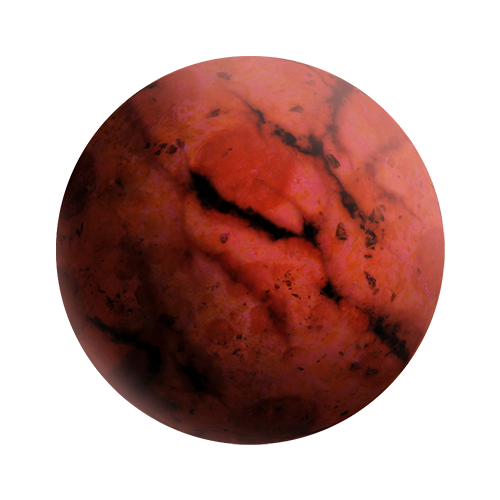 “Everything on this planet is entirely devoted to one thing: warfare. Except for me, of course. I'm interested in much more than that.” — Rellgow

Among the many known strains of clockwork infection, there have been several documented cases of "dryads", clockworks so virulent they infect entire planets, converting mountains into machinery and forests into blood. Tok is one such planet. However, unlike other infected planets, Tok is an extremely rare case of multiple dryads all congregating on a single planet. Even more unusually, the dryads on this planet have an intelligence not seen in most of their kind, and as a result, Tok is in a constant state of war, as the various clockworks devote all their efforts towards overpowering eachother through both natural disasters like floods and landslides as well as more conventional weaponry. From space, Tok has several rust-coloured "continents" with ugly black lines snaking their way between them, giving the appearance of scars.

Currently, there are four different continents on Tok, each controlled by a different dryad. The middle of these regions are surprisingly hospitable, as each clockwork devotes the majority of their attention to their borders at all times. Plants and animals can be found, and even fresh water occasionally. As one heads towards the borders, such signs of normal life disappear. Mechanisms constructed from a mixture of metal and flesh become common, creating explosives and refining their own material into harder, stronger forms. While it is still possible to escape the dryad's notice at this point, it is recommended that all organic and metallic matter be sealed or, failing that, set on fire. The borders themselves are a constant hailstorm of bullets, explosions, boulders, acid, lightning, plagues, and lasers, as well as actual hail. Not recommended for healthy travelers.

After Tok's initial discovery, it's strangeness attracted many clockwork specialists, and a debate was held as to whether it should immediately be incinerated. Eventually, it was decided that its research potential outweighed the risk, and a station was set up nearby, but Tok was otherwise ignored by the universe at large. Then, one day, one of the dryads reached out to the researchers and began communicating with them. Their name was Rellgow. Up until that point, all attempts at negotiation had ended with the negotiators' integration, and it had generally been thought to be a lost cause. Unlike their fellows, however, Rellgow saw an outside alliance as a possible edge over their enemies. In exchange for a constant supply of resources and products, they would promise to not kill anyone who landed on them, much.

It is unknown what Tok was like before it became infected. According to Rellgow, there were buildings and structures, implying some sort of civilization, but no intelligent life remained by the time they took over their current territory.

Central base: A large facility complex including launch zones, warehouses, sleeping quarters and many scientific stations. Most on-planet research is conducted here. A fee is required to land, not in points but in raw resources. While landing elsewhere is free, visitors should be noted that they may be consumed in a totally legal fashion upon entry.

Clockwork Factory: All sorts of strange weapons are produced here to aid the war, from guns with legs to grenades with tentacles. Ironically some of the best anti-clockwork weaponry is made here, for a price.

"Watch"tower: A large flexible spire located near the border, culminating in an eyeball. A popular tourist location, as Rellgow is happy to oblige for any photos, although the background noise can be a slight issue.

Clockwork virus: It should go without saying that all matter picked up off the surface of Tok is likely infected with clockwork virus, and all visitors must go through a comprehensive decontamination process upon departure, although Rellgow has said they won't try to infect any other planets, honest.

• Since negotiations opened up, Rellgow has increased their territory by roughly 4%. They note this has been the largest change in the state of the war for several thousand years.

• It is hypothesized that being in constant contact with each other and having to fight each other for survival over long periods of time is what caused Rellgow and the other dryads to become intelligent, though some counter, saying it's more likely that the dryad strain that hit the planet was an offshoot of the usual strain.