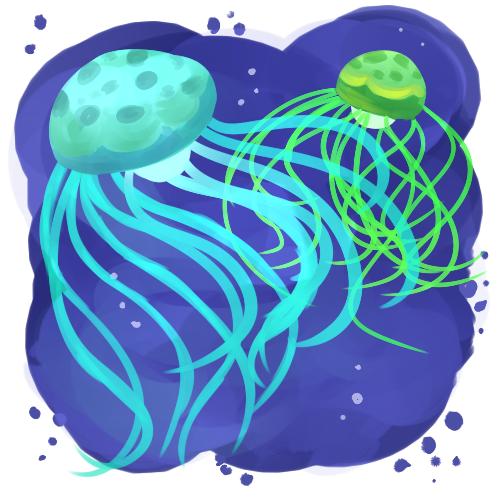 “You have to be pretty dumb to wear a jollyfish!” — Council for Clean Teen Living

Attack Method: Attaching to attacker's head and eating the ill will the attacker felt toward it.

A translucent, squishy and boneless sea critter with a mushroom-like cap that grows to a size of six inches by six inches with twelve to sixteen tendrils drooping from the circumference of the cap's underside that reach one-and-a-half feet in length. Jollyfish can be colorless or can come in shades of yellow, green, teal, violet or pink depending on subspecies.

Jollyfish are simple, docile creatures who only seek to live in peace. They will not attack anyone unless provoked, and would likely live their lives as a non-notable fauna if not for how they defend themselves from prey, and the two exploitable effects this defense brings about.

Jollyfish defend themselves by attaching to an attacker's head. There, the jollyfish neutralizes hostile and unhappy thoughts the attacker has by consuming the negative thoughts. As it turns out, this first effect is something that people will seek out deliberately.

When this effect was discovered, researchers were optimistic of mass-breeding jollyfish for use as a therapy tool for those with depression, anxiety, or trauma-related mental illnesses. Unfortunately, research trials showed that chronic, long-term use was inviable, as frequent use saps a user's mental abilities. As such, one can wear a jollyfish to revert their morale to a neutral state, but at the cost of the user's long-term intelligence.

The second effect of a jellyfish attaching to one's head is that, for whatever reason, doing so "unlocks" any hidden psychic abilities its wearer may have. However, using any psychic abilities while wearing a jollyfish also comes at cost to the user's long-term mental faculties.

It's possible that with enough repeated jollyfish use, a user's intelligence may drop to nothing at all, becoming mindless. When this happens, that host comes under full control of the jollyfish. At this point, the jollyfish will throw the host vessel into an ocean or lake, and that body will spend the rest of its time carelessly swimming and eating algae until it eventually explodes with eggs for a new generation of jollyfish.

There is one more side-effect to the use of a jollyfish: whenever worn, even if its other effects are not being utilized, the wearer displays an unsightly wide grin. This smile is described as abominable and unnatural, and it's said that user loses all the charisma they previously had so long as the jollyfish remains on the head.

Dud jollyfish: Most subspecies of the jollyfish have the effects as described above. However, the effects of others differ. Dozens of subspecies of jollyfish do not cause one or both of the desired side effects that sapients wish to use them for. Some of these jollyfish fail to neutralize a user's negative morale; others fail to enable a user's latent psychic effects; some fail at both. However, the jollyfish otherwise does all of the same things normal jollyfish do when tapping into a user's brain, meaning that use of a dud jollyfish has all of the risk and cost of a normal jollyfish with none of the benefits.

Most of these different subspecies cannot be readily distinguished from "standard" jollyfish except by trained professionals. Even amateur classifiers can mistake a standard jollyfish from one of its "dud" counterparts. This means it is important to make sure any jollyfish one uses is properly sourced.

Hellyfish: This jollyfish feeds off positive emotions and causes the user to enter a bottomless depression or an uncontrollable psychic rage. It is extinct in the wild after targeted extermination and only a few hundred remain in existence, kept in secure laboratories for research purposes. They are easily distinguished from other jollyfish in that they are a glowing beet-pink and have four-foot-long tendrils.

Psychic enabler/Morale neutralizer: A curious side-effect of a jollyfish tapping into someone's brain is that it unlocks any latent psychic abilities that person might have if they were a different species that had psychic abilities. The strength of those psychic powers are proportional with the host's intelligence. However, the use of a jollyfish for this purpose comes at a cost: every time a host uses psychic powers, their intelligence permanently drops by a bit, as such an expenditure of energy requires the jollyfish to consume a large portion of the host's memories all at once.

What psychic abilities are enabled depends on the individual using the jollyfish; these are predetermined by chance and will not change by simply getting a different jollyfish. One may not have any powers waiting for them. This means that one must risk putting the jollyfish on in the first place to even find out if they have any powers, and what those powers might be.

Morale neutralizer: Wearing a jollyfish while suffering from significant negative morale will cause the user to revert back to a neutral state of morale, at the cost of a bit of intelligence. The morale will stay this way when the jollyfish is removed, though there is nothing stopping the user's morale from gradually dropping again if the root problem causing their suffering remains. This means that jollyfish are most useful for suffering caused by traumatic memories, though its effectiveness is still subject to risk.

A jollyfish user also picks up the trait of being "uncanny and unsettling" as long as the jollyfish is being worn. Other people who are wearing jollyfish are not affected by the person's decrease in charisma, since they understand what's up.

• Jollyfishes' psychic-enabling properties have been extensively researched by those seeking to invent psychic-enabling machines or even psionic weapons, to no gain. Mass-use of jollyfish for a "psychic attack corps" or a "department of control" have also been tested by a few unscrupulous organizations, but the long-term mental decline and general lack of negative intentions present in jollyfish wearers have shown this to be ineffective in the long run

• Despite being associated with psychic powers and being portrayed as genius manipulators in popular media, jollyfish are extremely dumb. They are able to recognize what water is and to go towards it when out of water only once they have the resources of a larger brain at their disposal, and that is the maximum of their potential. Before then, they are incapable of telling when they are in or out of water and cannot react to being out of water. Rather than predation or starvation, the most common cause of death in a survey of 9,000 ocean-bound jollyfish was no longer being in water via wandering onto shores, jumping onto boats, standing on the surface of water until the cap dried out, etc.

• A jollyfish tastes like nothing, and is so low in calories that digesting it burns as many calories as it provides. Eating one for its water content is also useless, as its cell walls are lined with a compound that cancels out any hydration one might have otherwise gotten. It also has bad mouthfeel, ruining any dish you add it to. There is no reason to eat this fauna.