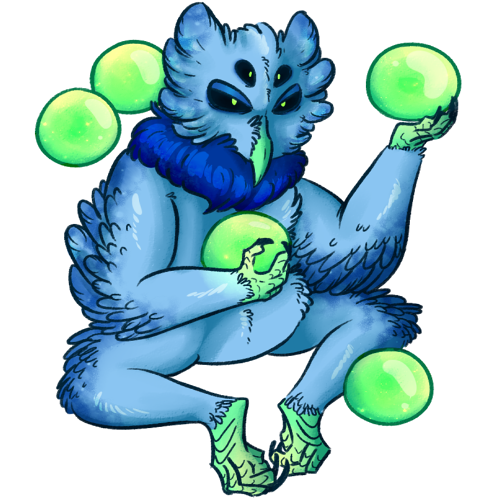 “Everyone's got their own spark.” — Unknown eparai

Attack Method: Runs away. If trapped, melee with frequent swipes.

Eparai do not have common religion or practices. It's not uncommon to have relics to the Singer or Helper, however.

Eparai are unguligrade, bipedal creatures with a thin covering of fur, feathers or something akin to sealskin depending on the region the individual originates from, walking primarily on bird or cat-like toes commonly equipped with dull claws. Most eparai have a flare or "frill" of their feathers or fur on the sides of their head or cheeks.

They come commonly in somewhat saturated, cool-range colors, though some redder eparai are rarely found. The majority of eparai bear bodily marks in an off-hue from their main color. Eparai have two smaller vestigial eyes above their main set, their irises and pupils indistinguishable from one another, which are usually a different color from the body. The sclera is generally a darker shade of the body color, and darker than the pupil and iris.

Eparai bear a circle of 5-7 floating orbs taking a moving half-circle around themself. These are maintained via very low level, subconscious psychic ability, and serve the purpose of collecting 'food' for the individual. These are always the same color of the individual's eyes, and their positioning is anywhere from around the waist to a halo slightly above the head. They naturally rise with age and skip over blocking visibility, so an eparai with a halo is considered formally a 'senior'. These passively supply the bearer, but can be manually eaten. Throwing an orb out of the psychic range roughly 1 foot around the individual is mildly painful but will discard it and whatever it has collected.

They bear something akin to a beak, with no teeth to speak of but the capacity to consume small fruits and nuts.

Eparai are passive emotion feeders with a tendency for more intense emotional response than most species. They are incapable of disabling the collection of "food" for more than a few minutes. They can do this by eating, or discarding their orbs, but these will naturally reform shortly. Touching the orbs intentionally is considered impolite without permission, but isn't a very big deal. They tend to feel like the emotion currently being temporarily stored would feel, very distantly.

On their home planet, their residential areas are sectioned apart because the presence of others of their species constantly being nearby gets overwhelming, though interaction is a daily necessity in order to survive. Eparai acquire their energy from physically being nearby other living beings, therefore chat programs do nothing for this. Their chat technology is somewhat advanced due to this, and the common need to not be overwhelmed by constant over-exposure to other eparai but not cut oneself off entirely from contact when "full." Projectors and cameras are commonplace in eparai homes.

Negative emotions generally have a bad "taste" and do little to help the health of the eparai in question, but are better than absence (in a similar fashion to junk food), and some eparai can develop or are born with a preference for adrenaline-associated emotions including anger. For this reason, eparai only honor their dead briefly, and do not hold funerals. The subject is not avoided, but it is not common to consider it worthy of lengthy discussion.

Eparai don't raise their children long. They're let out into the world at toddler stage in modern times, however with very clear instruction why not to leave safe areas until they come of sufficient age. This is not commonly done with an eparai pair who live off-planet, unless the parents find their residence to be sufficiently safe.

Eparai passing their children back and forth with other pairs they know to be taken care of is a regular occurrence, including if the pair "babysitting" do not have children of their own.

Many eparai have problems understanding "hints" or more detailed expressions of emotion from other species, due to theirs being naturally fairly loud about their expressions. An eparai who spends their life off-planet is likely to train themselves to pay closer attention to what they can feel coming off other beings, however, and may function as a working empath with the assistance of their natural biology.

Eparai feeding, due to its passive nature, does not generally affect other beings noticeably, but a starving one holds the capacity to instinctively drain the nearest source more aggressively. This can cause an effect similar to depression's lack of emotional processing.

Eparai arrived somewhat "late" to the revolution of intergalactic travel, having less natural interest in exploring the rest of the universe before they could sort out their own to enough comfort. As such, their personal technology and many cities/towns are well-developed in this era. Despite the initial lack, though, traveling off-planet is now nowhere near uncommon, though most require locating a partner for long travel.

In early history, they gathered in clans of 3-6 individuals to a settlement and engaged in trade and mate search with other clans, and had developed claws and sharp tools not for hunting but for self-defense against common predators who could not be outrun. Their claws were mainly used for gripping in climbing up trees or steep cliff faces in order to evade attack. In modern day, the idea of having a 'nest' still retains a naturally safe feeling to it, so most resting areas are suspended.

A common belief between eparai is that the vestigial eyes they possess were used by their ancestors for more precise "seeing" of emotional energy, in order to both understand one another more clearly and recognize predators' aggression. This contributes slightly to the common prejudice against eparai which naturally prefer adrenaline for feeding.

None: Eparai do not formally designate subspecies within their own race, however their genetics are widely adapting and variable. They often mix, but if anything were to be highlighted, they would probably be designated depending on the majority of their fur/feathers/'sealskin' cover, such as forest, savanna, or marsh.

Passionover: If morale and sanity added are low enough, an eparai gains the ability to focus a target to drain morale from a target to increase their own, amount depending on the target and point at which the ability is used. This has a chance of causing sanity damage. If morale and sanity added are very low, this ability is autonomously triggered.

• Their culture widely believes lying for someone else's sake is a common courtesy, but lying for your own is on equal grounds as to how common species consider it.

• Their romantic media is centered around finding 'the one' that doesn't get overwhelming to be consistently around. Happy polyamory is considered highly enviable because it's such a rare thing, but may actually work in a "cyclic" fashion.

• Most eparai prefer bright, cheery clothing with patterns, and hats are frequent in their fashion. 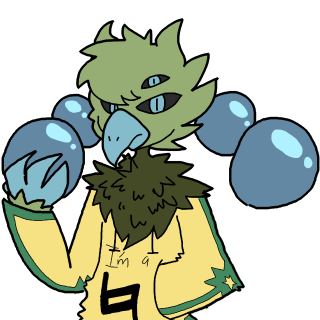