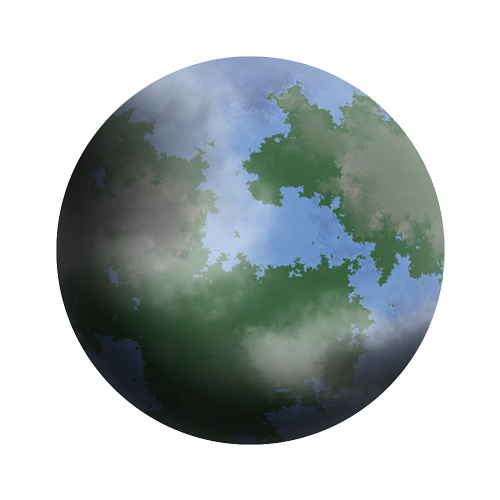 “From racecars to swing bars, it's the hottest spot in the stars!” — Pacoficus Slogan Department

Unlike the typical spherical planet, Pacoficus is very oblong along it's poles. This is the cause of a much larger equator and a vast surface of the planet being locked in a tropical climate. At either pole light snow falls during the colder months, but there is no naturally frozen water otherwise. Plentiful fault lines have created small mountain ranges across the planet, forming basins in which water collects to fuel planet-wide rainforests and fertile grasslands. Today, civilization can be found sprinkled across the planet amidst a slew of harsh climates, feverishly and happily keeping the monsters of the wild at bay.

Once a dangerous and overgrown landscape filled with treacherous terrain and deadly fauna, Pacoficus has been completely reformed thanks to a spectacular industrial revolution hosted by the pagepohs. Culture developed faster than machinery, and demanded that cities rise and entertainment be provided on such a planet, and so it was. In a very short time, pagepohs adapted the landscape to suit their growing commercialism, and have turned the planet into a staple of commerce, where both luxury and thrills are never more than a stone's throw away.

Badhammot Theatre: One of the first ever, and still most popular theatres on the planet. A veritable mall of entertainment with performaces ranging from opera to cinema. In recent years there have been rumors of research into virtual reality and sensory stimulation as a form of cinematic experience.

Museum of Unnatural Horrors: A zoo-safari hybrid that takes tourists on a journey through the most dangerous forests of Pacoficus for a chance to look at the ravenous creatures of the planet up close. Despite the terrifying nature of the terrors of the wild, guest safety is 100% assured!! (Legal Disclaimer: Guest safety is 99% assured)

Silicon Mountain: An incredibly tall mountain near the north pole of the planet has been suited with weather modulating technology that produces snow a great length down the mountainside. Tired of dank forests and smelly theatres? Give Pacoficus's cooler side a try by skiing Silicon Mountain! Paths for all skill levels, and refreshing cold air you'll hardly find anywhere else on planet!

Oblong: Pacoficus's peculiar orbit and rapid spin has, over eons, maintained its shape as a 3-dimensional oval. Not a form so drastic that it defies physics and baffles scientists, but enough of a difference from the typical circular ellipse ubiquitous among other planets that it is worthy of note. The planet's moisture is regulated well thanks to the resulting rapid movement of the clouds, however the speed can be a problem for ships attempting to land. The citizens and business owners of Pacoficus have, since discovering space travel, set up multiple docking satellites that assist visitors in landing and takeoff.

• Pacoficus holds the universe record for fastest time between the discovery of fire and the invention of telecommunicatin!

• A single string of volcanoes called the Red Snake stretch in wavy, stream-like pattern around 60% of the planet!