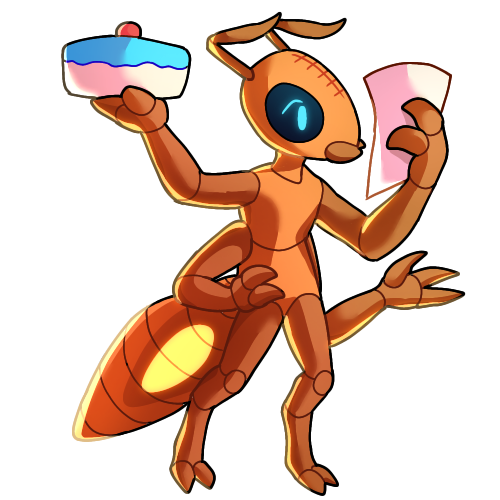 “Sorry, I just know how to make cakes. You'll have to ask someone else how to cook one of those "frozen pizza's"” — An ephemyrma cooking instructor

Attack Method: Ephemyrma will use any combat knowledge they have, and otherwise try to shield others with their body.

[Humble] Neutral trait
This character may enjoy complements, but they tend to make themselves out to not deserving as much credit. Unconsciously or not, this character might let someone else take credit for their work. This trait also makes sure they are never to boastful or proud.
[Never Panics] Positive trait
When situations come at this character, they remain calm and collected. They are able to think clearly in nearly all situations.
[Goner] Negative trait
This character's fate is sealed. They will never receive a miracle roll, and they simply die instead.

The ephemyrma believe that death is "not that bad" and "probably a nice person if you get to know them".

Ephemyrma are a small bipedal clockwork species that looks like metal ants. Their bodies are covered in bronze and their limbs and antennas are made out of copper. Their eyes are a pair of teal lights in a pair of dark holes in their head. The top of their head has a seam where their brain was placed.

Ephemyrma are normally found working jobs that they've been specifically created to do. Either because someone paid their queen for an employee or because their queen needed a worker. Ephemyrma colonies have a giant brain at their center and knowledge from this brain can be copied into a brain chunks to let a newly created ephemyrma have this knowledge as well. This allows the ephemyrma to provide people with very specialized knowledge in a very short time.

Knowledgeable ephemyrma tend to be very expensive, but prospective employers can be very specific about the knowledge they want the ephemyrma to have. Some schools use ephemyrma as replacement teachers and just have them know the one chapter of a textbook that is being discussed.

As clockworks, ephemyrma face some prejudice. While they make an effort to look safe and act peacefully, they don't tend to challenge anyone who speaks poorly of clockworks. Even when someone says such things to their face they just try to ignore them and continue on with their jobs.

It's a common misconception that ephemyrma are slaves. Ephemyrma actually do normally have employment contracts, but they are very easy to satisfy so usually these contracts just pay them with food and access to a TV or a ping pong table. Ephemyrma like to feel useful and will happily try to help people in their off time.

The ephemyrma say that they used to share their planet with a giant blood drinking species which traded them knowledge for labor. As time went on, the plant life on the planet started to die out and so did the leaches, until all that was left was a single ephemyrma colony and the rodents they raised as food. This ephemyrma colony slowly and reluctantly started to do their own research, until they reached space and found a new source of books in the form of the intergalactic community.

Queens: Queens are the leaders of the ephemyrma. They're smaller and frailer than the regular ephemyrma and they have bigger antennas. Their livespans are bigger too, a queen can live for a whole year.

Queen ephemyrmas have a hole in the back of their heads which allows them to be connected to the giant brain in the center of the ephemyrma colony. While they are connected to the brain, queen ephemyrmas are in control of the creation of new ephemyrma and any knowledge they gather once they are attached is transferred to the giant brain. Memories are stored in the queen's own head, however, and don't carry over between queens.

Queens can't detach from the brain until the end of their lifespan and they don't want to. There is nothing a queen wants to do more than read and add more knowledge to a giant brain. While queen ephemyrma prefer to read the driest possible physics books, they are content with reading cheap romance or detective novels, or even phone books.

Despite their longer lifespans, queen ephemyrmas don't fear death more than regular ephemyrma do. At the end of her year, a queen ephemyrma will detach the giant brain wire from her head, have chat with her replacement and then simply walk to the body recycling chamber and snap her own neck.

Soldiers: Soldier ephemyrma are far bigger and stronger than their regular counterparts. They only live for a few hours once they've been awakened, and there are usually a few dormant soldier ephemyrma near the queen's reading room. Because the ephemyrma don't want to be known as a warfaring species, they don't allow anyone to buy a soldier ephemyrma.

Expendable: Ephemyrma are very much indifferent to their own deaths and will never object to something just because it's likely or even certain that it will get them killed.

• Ephemyrma have been banned from nearly every quiz game show in existence.

• Ephemyrma may not have any survival instincts but they do seem to have a sense of dignity. Experiments have shown that ephemyrma will go along with fighting in a death match for amusement purposes, but telling one to light itself on fire for a researcher's amusement will result rude hand gestures.

• Zuid-tians tend to be critical of how ephemyrma present themselves, and by extension clockworks, as expendable and replaceable, and will scold them for agreeing to anything excessively dangerous.