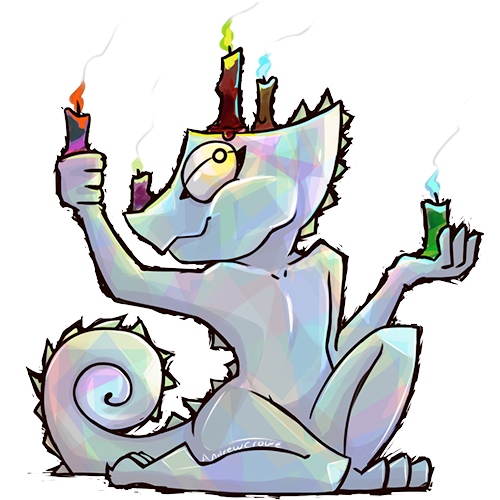 “I was born with glass bones and glass skin. Every morning I break my legs, and every afternoon I break my arms.” — Gothic

Attack Method: Quick and decisive, striking with pointed tongue once and running away, occasionally striking with their claws or tail if their tongue is already broken, although this is unusual as they will not survive almost any attack.

They are too concerned with daily life for gods.

Chistile are a short bipedal reptilian species resembling chameleons, usually hunched over, with dark grey joints and translucent scales in patches of varying blue, red, green, yellow, purple, and white. While somewhat opaque, in high sunlight chistile can be dazzling and even painful to look at, and so they often wear loose embroidered robes, which with how garish they are, do not do much to solve the situation.

Having bodies made out of glass has a great variety of detriments. Able to scratch their skin on most objects and shattering with a single misstep, chistile are extremely anxious and cautious when anywhere but their home planet. Despite the overwhelming pit of anxiety created over possible injury and the massive amount of debt already incurred from injury repair, chistile are extremely proud of their scales and will forget all their troubles when complimented on their look. It is generally a bad idea to talk about money or jobs around them due to their debt predicaments. Do not be offended if they do not talk on some occasions, as they were probably hired to be expensive mood lighting and thus can not move.

Quite a long time ago, before any outside contact, chistile lived simple and stress-free hunter and gatherer lives on their safe and soft home planet. One day, two chistile found a skarv with a broken golem abandoned in a tree they gathered fruit from. The scarv asked the two to use a transmitter hanging from the tree to get help. Enticed by the promise of otherworldly knowledge, the two did as asked. A week later, a nearby Hermes ship approached and landed roughly, shattering the entire population of two chistile villages.

Since these early days of their history, chistile have spread out into the universe and advanced to modern technology. Almost all chistile have incurred large debts as a result of the constant repairs they make in order to keep themselves intact and polished. It is not uncommon for chistile to work strange and demeaning jobs to pay off their debts.

Flaff is a largely rural planet with tall grass, low bushes, and many other soft plants. In recent years, small cities and mills have appeared as outside enterprise is brought to the planet. Chistile still largely remain its sole species.

Uncolored: Chistile who have uncolored scales tend to be much more level-headed and durable than other chistile. When around other chistile they are generally shunned.

Mirrored: Exceedingly rare chistile who have reflective scales tend to be more self-absorbed and short-tempered than is typical for chistile. Often they can be found with a group of followers who they deem to reflect well off their scales.

• Chistile scales can be sold for a small price.

• Walking on chistile scales is about as comfortable as it looks.

-Back to Species Menu-
< Chira
Chriilth'tyn >