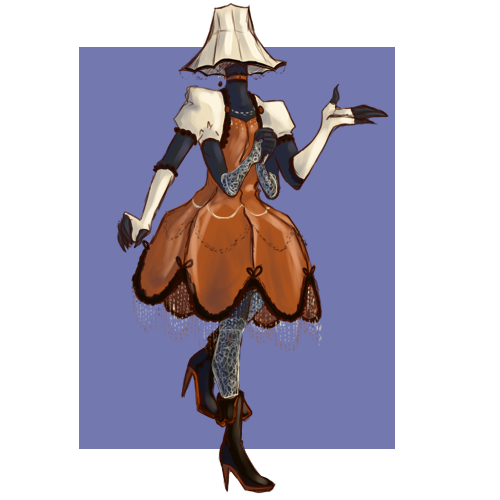 “This year's award for best costume goes to X" "But I'm not wearing one.” — The face when you invite an enmasque to your party

Attack Method: Try to de-escalate, and if it fails they reveal the true self to frighten and attack.

[Cosplayer] Neutral trait
This character enjoys Cosplay.
[Sexy] Positive trait
Most people find this character to be very attractive. They can charm others with their looks alone, and will often recieve special attention as a result.
[Distrusting] Negative trait
This character is slow to trust others and may not understand sincerity or integrity, believing that people must be motivated by self-interest. They may disobey orders or go against their own crew because they believe they are trying to trick them.

Largely secular, and faith outside of it is personal.

Enmasques present as bipedal organisms with two or four arms, and often dress as 'sexy' versions of things whether they be a species, character, household item, or an abstract concept. These can range anywhere from a terraforming device to a vespidee. Regardless of what they present as in public this is referred to as their 'masque' and will always be five feet tall.

In the event that an enmasque feels comfortable enough or is driven to they will transform into what is best phrased as their 'true form'. While there is variance in configuration this is always a twelve limbed 10 feet tall organism with rows of teeth, scythe-like limbs and limb-lets, and will often look like a dissected version of what they presented as. Bisected forms splitting open, false-anatomical features, exposed flesh, and more are present among individuals.

Enmasques will from time to time (per year or decade) change their masque. This is a metamorphic and design-intensive process that results in an individual who barely resembles what they once were. While some do not change their anatomy at all the general consensus is that people will always reflect their ideal self. It is believes that this cosmetic process is what actually causes the species to have an effective maximum lifespan, as a result of inevitable biological complications.

As the masque is a reflection of the ideal self the actual behavior of an enmasque is fairly variable as they will often have a personality reflecting their masque, or merely their own self with the masque as a depiction of what that self is. Given the high-accuracy work masque-creation entails many enmasques work in the entertainment industry, and through that they often find themselves going above and beyond to ensure a pleased audience.

Given that the masque is a reflection of the ideal self many enmasques view their true form with deep shame, and will only reveal it willingly to those they trust. What this trust means and what level it goes to is a personal matter, but once it is gained the enmasque will casually reveal themselves in private. Most surveyed stated that while the masque is the ideal self it is not something that can be maintained forever, and that rest is necessary. This rest comes in the true form's leisure, and being able to enjoy it with a trusted friend is preferable to bearing it alone.

While their longterm history has been lost to the ages it is known that at some point in the space age the concept of a masque did not exist. The enmasques went by a different species name and they scarcely resembled what they are now.

At an unknown point enmasques stopped being seen, and it was believed they had gone extinct. During this time a sociopolitical revolution was underway on the homeworld.

When the enmasques rejoined the universal stage they had masques, the modern representative government they have now, and the generalized standards they are known for.

The original enmasque homeworld was made irrelevant not long after their return to the public eye, and has been recently lost to time. Instead of a stable homeworld the center of enmasque society migrates from planet to planet whenever the new 'convention center' is decided on.

When this change is announced enmasques who live on the homeworld rush to schedule lodging, transit, and plan their finances ahead. A limited number of people can live at the convention center, and as a result a portion of enmasques will always have to leave the species hub and embrace life among the stars. At least until they can go to the next convention.

Truth-bodied: These enmasques do not have a masque at all, and view their natural body as the true self. While they were at one time shunned they are currently welcome in normative enmasque society. Records of enmasque anatomy do not seem to line up with truth-bodied anatomy. Their lifespans are many times longer, and theoretically cannot die of old age.

Screamqueens: The common screamqueen is an enmasque who has decided that the ideal self is what naturally would sit beneath the masque. The true form becomes an almost ethereal wisp of beauty that glides on the air around it. Turning themselves inside out as an expression of art and an embrace of life's horrors is what they do best.

Sexy Dark Angle: If there's an article on this website you can guarantee there's an enmasque who's "ideal self" is based on it, and look damn fine as it.

• There are a long series of conspiracy theories regarding the natural anatomy of an enmasque being an aggressive clockwork. Analysts currently suggest that the modern enmasque exists as a social adaptation to what would otherwise be a stigma similar to what the zuid'tian experience on a daily basis despite having no relation to any clockwork strain.

• Government takes the form of a representative legislative and executive series of panels. Representatives are known for their prioritization of not only representing their people, but changing their true self to reflect values of the universe that can be brought to the political stage. As a result the majority of them have an ideal self based on people one would find in the legendary section.

• Enmasques hold any species or culture with an emphasis on festivals, celebrations, and general mirth to a high esteem. 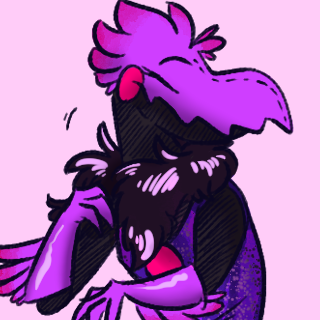