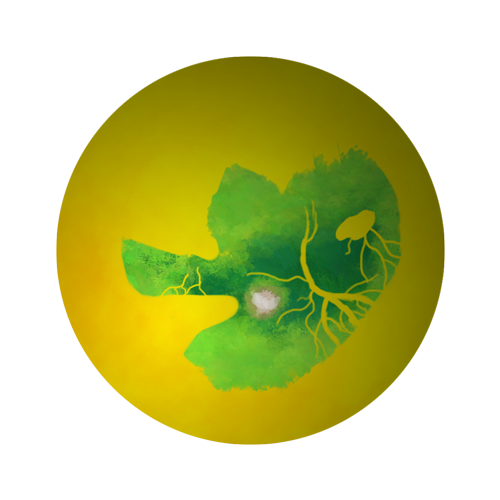 “How can anyone stand this place, the air is sweet, the people are sweet, the goddamned water is sweet, It disgusts me.” — Unknown

The largest moon of the gas giant, Apex, Apidaria is a yellow/green temperate planetoid, very calm and stable, rather idyllic locale. The weather is calm and peaceful the majority of the time, although it does rain on occasion, it's a rather gentle showering that only lasts for a short while, long enough enough to make everything glisten.

The planet's land is made up of a single, fairly large, grassy continent, broken up by rivers and sparse woodlands. The grasslands are covered in all manner of flowering plants due to the excessive number of bees in the vicinity. The woodlands are similarly, filled with hives for a myriad of bee and wasp species.

In the exact center of the continent is a large mountain, it's the only place that isn't amazingly temperate, being snow-capped and rather cold, especially in the upper reaches. The waters of the world are rather peculiar, due to the excessive honey industry, massive amounts of honey and nectar have been dumped in the water, permanently altering it, making it yellow, more viscous than normal, and distinctly sweet. This extends to the rest of the environment as well, and everything is rather sweet tasting and there's the constant smell of honey in the air.

The land is lightly urbanized, with cities mostly made up of honeycomb apartments and suburbs, the rest of the landscape being dotted with industrialized apiarys, honeyplants, and assorted other honey industry related structures.

Legend has it that long ago, before the apidee, a group of mysterious entities known as the 'Three Mother Bees' arrived on the world. It is said that they engineered a number of bees and bee-like creatures, and radically changed the environment, and that they ultimately created the original apidee from one of these bee species, before suddenly vanishing. Of course, another, arguably more popular legend, holds that a great beast up and died on the planet and that the apidee and all other bees crawled out it's rot, so who can really say whats likely amongst apidee legends.

Of course, however they came about, the apidee were born on the world, and swiftly dominated it. For how long they lived like this, but at some point, after achieving space flight, they left their homeworld, to discover a universe that did not appreciate honey as much as they should, and the rest, is history.

St. Beetersberg: The oddly named capital of Apidaria, and home to 'St. Melissa's Home for Wayward bees and Cloning Facility' A massive cloning facility and orphanage where the majority of apidee are created and raised. The rest of the city is made up mostly of lesser cloning facility/orphanage, and apartment complexes.

Aspis Honeyplant: The largest honey-plant on Apiaria, it produces the majority of the honey that is used by the world or exported to the wider universe.

Mt. Cythridae: The large mountain in the middle of the continent, a gray, snow-capped mound reaching jutting conspicuously out of the dramatically more flat surrounding. The apidee avoid the place, mostly because it's cold, but some insist that there's something strange in the mountain, something potentially dangerous... and likely incredibly valuable.

No! Not the bees!: The only fauna on the planet are various sorts of bees and wasps, from relatively normal honeybees, to the giant Megavespa, large enough to be used by apidee as a mount. Some are mutated, some are horrific, some are both!

• It is believed that all bees that exist in the universe originate from this singular moon, that is untrue, but due to the shear amount of bees on the planet some are inclined to believe it.