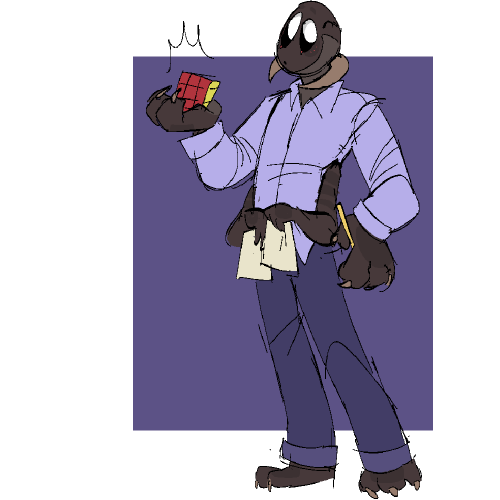 “COULD YA GO ANY SLOWER??” — Someone in line at the space DMV

Attack Method: Use their large claws and weight to their advantage, if possible. Defend themselves as much as they can and wait for help.

The enotir are an incredibly slow species, often compared to sloths in their mannerisms. They make up for their abysmal speed with their strength, intelligence, and endurance.

Besides their speed, or lack thereof, what enotir are most notable for is their incredibly low pitched voice. The voice of an enotir is so low, a large majority of species in the universe are unable to hear them speak. Most enotir opt to learn sign language or get a voice modifier. Those who use sign language are said to still talk while signing, it is just that none can hear. Some have even adopted the use of a white erase board to communicate. While extremely rare, an enotir may be born with a voice audible to the majority of other races, but this phenomenon has only occurred three times throughout their recorded history.

Enotir have an oval shaped head with what looks like a jaw line at the bottom of it, which is in fact not a jaw. Their face is relatively flat with two pairs of eyes, the larger pair being on the front and a smaller pair placed on the sides of their head. This secondary set is often closed, unless they wish to see as much of their surroundings as possible. The pair of secondary eyes open at a diagonal angle, with the sides of their eyes pointing up and toward the back of their head. The primary eyes open vertically and all four eyes have black sclera with white irides and pupils. Some enotir are born with black pupils or gray irides, though this is uncommon.

Below the pair of primary eyes on what is considered their chin is a small black dot, which is in fact an enotir's nose. On each side of their head they have a tusk. The way the tusk grows varies enotir to enotir, but often grows straight quite near the face before going into a slight curve up and out. They have a fairly long neck, which adds to their height.

The enotirs' method of eating is best described as "popping the top." Their entire head is able to lean back, revealing molars on the very bottom of their head and more along the rim of the orifice. The majority of food they eat is ground up by the molars, but can be eaten whole for a slower energy release.

An enotir has two sets of arms: a bulky and muscular pair that have large square palms with three fingers and a thumb all of which end in broad, resilient claws, and a much smaller, skeletal pair, ending in delicate, squishy hands with five fingers and a thumb. The delicate arms have no claws or nails to speak of, and are extremely fragile in comparison to the bulkier set.

The clothing that enotir wear is usually optimized for comfort more than style. No matter the clothing, the bulkier pair of arms is what they put through the sleeves. Most enotir modify their clothes to have small hole a bit below the chest area as a way for their secondary pair of arms to go through, and usually a pocket on the inside for small supplies or to warm their hands.

An enotir's body ends in legs anywhere from half to three fourths the length of their body. Each of the legs end in large, long, and flexible feet. These feet have three toes each, all of which have the same type of broad and resilient claws as their pair of bulky arms.

Enotir have leathery skin, which is most entirely void of hair, save for some individuals' knuckles.

Enotir are very observant and enjoy pointing out little details, whether it be a simple pattern to a puzzle or a small yet catastrophic mistake in a plan. Most enjoy detail based puzzles and are likely to have a hobby of solving and creating these puzzles themselves.

Enotir are tolerant by a majority of standards, and as such often take the role of mediator in conversations between opposing sides, able to see the reasoning of both parties. They often are agnostic in their religious and spiritual views and enjoy having meaningful discussions about the topic.

Enotir, being fairly patient, are more than willing to wait for hours on other people, though this is not always the the case for others with them. They are constantly late, no matter the occasion, and it is recommended to schedule any meetings hours early and project deadlines weeks in advance of the actual due date.

Although most blame this fault on the enotirs' abysmal speed, the true reason may still be hidden. Some obscure groups hypothesize that enotir as a species may have a faulty sense of time, but there is little proof to back this up.

Many enotir like gardening to some degree, and are often employed as gardeners. They can and will eat any of the trimmings.

There is a small creation myth some still believe; that their voices in a way were stolen from them, which is why most of the universe is unable to hear them. The biological reasons why are still unknown, but some speculate it has to do with secretive communication as so the other fauna of the planet could not hear them. Their history is largely unknown other than this.

Their home planet is covered in towering jungle trees with cities built into them. There is one large ocean that splits the land into four large continents. The west and east continents are very humid with plenty of vegetation, mountains, and fairly diverse fauna. The north and south continents in comparison are frigid cold and flat, yet tree covered all the same.

Arctic Enotir: These enotir live at the poles and are far more charismatic that their jungle cousins. They are extremely fluffy as an adaptation to their subzero environment. The internet has taken to calling them "floof bois."

• As so many enotir are obsessed with puzzles many will create at least one book of puzzles in their lifetime, meaning the universe is flooded with puzzle books made or at least co-created by an enotir.

• Not all enotir are truly agnostic, though many will say so as to avoid too much confrontation.

• Most encounters with an enotir will be at a space DMV and there is no getting around this fact.