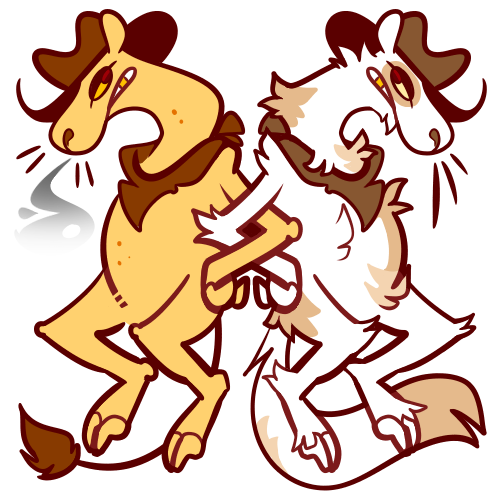 “Say it, don't spray it.” — Bessy the Kid, shortly before losing an eye

Attack Method: Cock their mouth like a shotgun and make it rain bullets of acid spit.

The spirit of the meteor that granted waylends an intelligent metamorphosis is fabled to still run through the fat of the land.

Gods: Spirit of the Meteor

Upon first discovery, it was debated whether or not the waylends classified as a fauna or species. As it turns out, they're both. It was then debated whether they were inhabitants of the dry lands or the frozen deserts, and yet again, it's both. The life-cycle of a waylend is literally polarizing, but can be broken down into two main forms dependent on upbringing and two sub forms dependent on season. To discover which waylend one is dealing with, follow this key:

a. Is this waylend an armored juvenile below the age of 1? If so, this specimen is a calf. All calfs, regardless of their parents' form, are the same: quadrupedal, clumsy, milk-colored tots that carry large plates on their backs.

b. Is this waylend armor-less and above the age of 1? If so, congratulations, this waylend is an intelligent species-classifying graduate. Proceed to the following paragraphs! If not, view the subspecies section for a lesson on feral waylends.

This civil waylend will resemble a bipedal camel. Their legs are digitigrade and their teeth are flat for grinding, commonly replaced with gold fillings for the same reason one might wear earrings. They have lanky shapes, round torsos, whip-like tails, and hoofed hands with a stumpy thumb. Sometimes waylends will cover up this incongruence of shape by dressing their bodies in western or steampunk themed clothing, like long spurred boots, ten gallon hats, vests, goggles, knickerbockers, and bandanas.

Regardless of their civil or feral form, a waylend's coat depends entirely on the season of their homeworld, as they experience frequent and dramatic changes in weather halfway through the year.

Now ask this: Is it winter on their homeworld, Buckingfield?

a. If so, this waylend will have their winter coat. Winter coats are incredibly thick and incredibly pale, usually white, and dotted with multicolored spots similar to a cow's. Their winter coats cover their entire body, causing their whip-like tails to bulk up. Waylends also have a bonus feature for the winter time called, "central heating". Essentially, they produce acid for saliva, which, when they swallow snow, boils the water inside their gullet. This boiling water functions as a furnace and yet another spitting weapon that's led steam to funnel out of their ears and mouths on regular occasions.

b. If it is not winter, this waylend will have a summer coat, which is to say they have no coat at all. Within 24 hours of shedding, a waylend will become completely bald, revealing their bright golden skin. The only fur left on their body will be whiskers and a tuft at the very end of their tail.

Sadly, intergalactic exchange has made the coat key unreliable. Space faring waylends may have internal clocks that are out of whack, causing some to have winter coats during the summer or summer coats during the winter. Exposing them to extreme temperature conditions for extended periods can reset this or be what caused the misalignment in the first place. For optimal growth and shedding, their environment must be consistent. A campfire is unlikely to ruin their day, but if some rascal decides to turn up the thermostat while a waylend sleeps for 10 hours, all bets are off.

Waylends are a self-sustaining species in which everything they are relies upon their upbringing. In short, they are cowboys who've taken up the role of both the cow and the boy:

Due to an event best described in their history section, the evolutionary line of waylends was split down the middle, granting half the population with consciousness and leaving the other half completely unaltered. Mostly. While they remained the same species, a new metamorphic potential sat dormant in all of their genes. Only the unaltered side of the waylend population were able to produce young, and these young, depending on which environment raised them, would develop to be either another feral waylend or a civil one, similar to how some species are capable of having eggs just by being with a partner. If a calf is raised with other civil waylends, the armor detaches and the calf develops like a child. If the calf is raised with livestock, the armor remains and the calf develops like an animal. The first year of a calf's life is that critical time in which the metamorphosis begins, and once the year is over, the change can never be reversed.

Civil waylends, despite what the name implies, are not the most sophisticated species. They are very rowdy and gruff, elbowing and punching people as if it were the same as a handshake. Waylends also spit frequently to show displeasure, or out of pure boredom, which doesn't take that much common sense to stop, and yet they'll do it anyways. Waylends can be as stubborn as mules and brooding to boot, but just because waylends often acquire the stereotypical downsides to being a cowboy doesn't mean they're without their upsides, too. Waylends usually act with an air of country charm and genuine love for the old fashioned comforts of the west, which includes holding acts of loyalty and heroism to a high regard. It doesn't take much to satisfy a waylend, but when they are, they'll hold onto it, and they'll care for it.

Coming directly from the evolutionary split, many waylends of the past became guardians for their herd upon metamorphosis, which honed their skills as ranchers and ability to accurately assess the conditions of animals. These waylends are not hermits, but could still be considered loners by consequence. They are unaffected by long periods of isolation, since it's typical of the ranching lifestyle they were born to uptake. Some ghost towns on their homeplanet have even been recorded as inhabiting no more than a single civil waylend at a time who could still resist dipping sanity levels. Waylends who do not adopt a herd and take up a job surrounded by other intelligents species will continue to display the characteristics of a guardian, treating their crews like herds instead.

The waylends' homeworld, Buckingfield, was originally a primitive planet, and all fauna who inhabited it were eons away from developing intelligence naturally. Then, out of the wide open blue, a meteor crashed into the planet. The meteor left a hefty dent, and killed a large sum of the population, but not enough to render the planet desolate. The leftover fauna would continue to drink the planet's water, unknown to the radioactive toxins that the meteor had just introduced into their biochemistry.

Luckily, the new division of feral and civil waylends took to conscious well, and lived together for many successful years, developing a culture of country bumpkins and ranches.

Their culture would remain stagnant for even more years after that, until the day that extraterrestrial communication was received. Their livestock began acting strange, so the ranchers began acting strange, and waylends opened fire on the impending invaders. This became known as the era of "camelboys vs aliens", but it ceased once the waylends came to the shocking, forward-thinking discovery that, they too, were, in fact, aliens. It was a simple revolution, really.

Feral: This feral waylend will resemble a heavily-armored beast. They retain their plates and quadrupedal build from childhood, but they'll now develop tusks and grow up to 10 feet tall. Their eyes lack whites and their brains any ability of speech, they are animals by every definition. Feral waylends will live out their days in herds to be used as all kinds of livestock, which includes wool, milk, labor, and even meat. Selling off feral waylends, who may be the ranchers' siblings, is an unquestioned practice, but don't feel down; sometimes the ranchers put sleigh bells around their necks in the winter, and it's very cute.

Polarity: Waylends have two adult forms, a feral and a civil, and one juvenile form. Waylends also change appearance depending on the season.

Grit: Waylends can survive long stretches of time without food, water, or company. They are built to endure.

• Waylends are very very very grouchy when shedding or growing a coat. It is therefore advised that one never attempt a temperature prank. If one is having trouble suppressing the urge, it is good to remind them that they will have to deal with that itchy waylend for at least 24 hours.

• Gargling is the waylend sound of warning. Duck immediately.

• Rarely, civil waylends will develop tusks similar to their feral counterpart. Civil tusks are much smaller than feral tusks and can be decorated with rings that match the waylend's gold fillings.