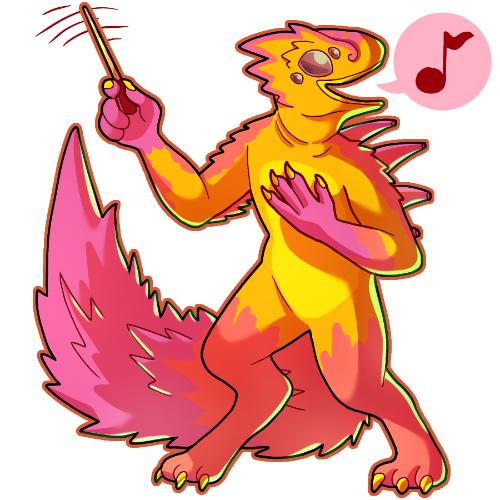 “Song is story, and story is how we view ourselves, our past, and our neighbors. Song is, in this way, all there is” — Enlavar Plath, ignalisk philosopher

[Musical] Neutral trait
This trait is similar to [Artist], however, a character with this trait specializes in musical talent rather than creating visual art.
[Respectful] Positive trait
This character is respectful and will respect the wishes of others or at the very least will make a compromise. Many others will feel safer talking to this character after their first talk and talking to them raises sanity and morale.
[Gullible] Negative trait
This character is commonly unable to tell when an event is fishy and commonly trusts whoever they talk to. Lies are harder to notice for this character and they can be easily tricked or drawn into a trap.

Ignalisks bear a strong resemblance to horned lizards standing on their hind legs, although their "horns" are actually hollow vents similar to an aoeyoi'ie's bone tubes. They have six eyes and are pink and orange in coloration due to the primarily pink sands in the desert from which they came. Their lips are squiggly, allowing them to open at small points and whistle in several different ways at once.

First and foremost, ignalisks value song above all else. They are always humming or singing, and if their voice is shot they will not be able to stand not having at least some kind of white noise. The concepts of song and story share a word in ignalisk languages, and songs of historical events, songs of passed loved ones, and songs of anecdotes are all sung with the same enthusiasm.

Ignalisks are not ones to assume things about people before meeting them, and can't imagine anyone else doing so either. As such, they are very careful when making first impressions, doing most anything that is asked of them. If they find anything strange, they will assume it is either tradition or, in the case of meeting a new species, something that species needs to live. There is one exception to this, if an ignalisk is asked to stop singing, they will take it as a great insult. They can sing more quietly, they can pause themselves briefly, but once they start a song they must finish it. If they are asked to stop singing, or if they realize they have been tricked, they will begin to whistle, and their temper will get quite literally hot.

When an ignalisk senses the end approaching, they begin humming and singing in minor key, all they sing taking on a sad tone. This is the cue for the dying's loved ones to write and finish any more songs they had to sing about them, though it is up to the dying whether they wish to hear those songs before they pass, or if they should only be played at the funeral. The funeral itself is quite the spectacle, the deceased is laid down in the center of a firepit, the family gathers kindling to place around the deceased, and all who came to the occasion form a circle around the fireplace and begin to sing, lighting the fire. After the ceremony, the deceased's ashes are put into a record containing that ignalisk's favorite songs.

Ever since the terrietes first told the ignalisks that their heat bubbles were harmful to the people around them, ignalisk society has been built upon being hospitable and accommodating for the needs of other species. As the first interspecies trade routes started to emerge, the ignalisks tried to cease their constant heat bubbles, and began wearing thick cloaks in place of the shield their natural abilities provided.

They would only use their flamecharming in choirs to make much larger bubbles that protected entire pathways or even small huts. In time they lost the need to even do that much as they developed music players that could replicate their abilities, leading to the modern day cities adorned with speaker systems atop large poles that generate enormous bubbles protecting towns and highways. The higher priority of developing music players also came from the fact that ignalisks record all their history in the form of song.

Flamecharming: The ignalisks bear a strange evolutionary trait, the ability to manipulate heat with sound. At its base form, it merely pushes intense heat around an ignalisk outward, forming a bubble with an edge of air hot enough to distort light. With focus, and the right music sheet, this can be used to push at heat in more complex manners and even start fires. This ability has dulled over time, though it has been copied and refined in ignalisk technology. This ability is not psychic in any matter.

Malventus: The ignalisks rarely had contact with malventus for quite some time, but once they were able to meet they were very pleased at the malventus' eagerness to listen to their songs. Whether the malventus' swaying while listening to ignalisk songs are small dances or an effect of the occasional blast of heat accidentally being pushed off by the ignalisks' vents, only the malventus know.

Terrietes: Terrietes were the first of the ignalisks' neighbors that they encountered, they were the ones who taught the ignalisks that their bubbles could be dangerous to others. The two species have long held trade routes with each other, and the ignalisks respect the terrietes' craftsmanship.

Nautalids: Rarely do an ignalisk and a nautalid cross paths, most ignalisks know only that the nautalids aren't terribly fond of them. The ignalisks are saddened by this, as they did not have much of a chance to tackle the environmental barriers between them before finding out they had somehow already made a bad first impression.

• Some ignalisks honor The Melodies, sad spirits that have no songs of their own, and grasp at any forgotten notes or verses that float down to them. If a song is forgotten entirely, The Melodies pick it up, and they may return it to you. It may be gnawed on, or scratched, and not entirely the same, but they did their best to bring it back to you, and so you thank them. The Melodies are also seen as the source of random bursts of inspiration, this being when The Melodies bring to someone a song forgotten long ago or forgotten by someone else, possibly by species far across the stars.

• All ignalisk cooking appliances make quite a bit of noise, and in fact most double as music players and contain playlists. This combination of cooking and singing can also be seen done by an ignalisk firsthand, as ignalisk performance chefs make liberal use of their flamecharming abilities to put on a good show. In the case of performance chefs especially, they are also telling a story as they cook. 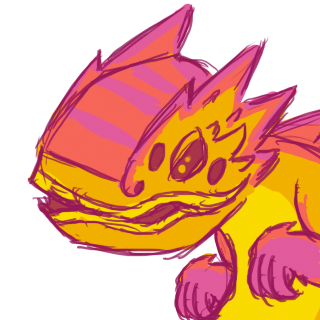