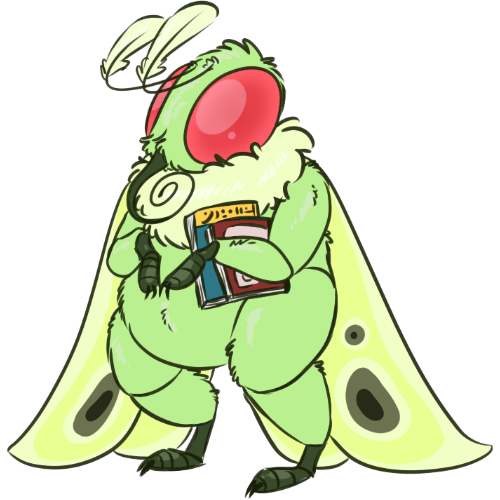 “Don't get me wrong though, I did it for the art and the experience. The philosophy conversations I have watched happen over these cocoons have been some of the most "Mind blowing" I've ever witnessed.” — Lechugaa

Didaskaloi honor what they please and there's no defacto god for the didaskaloi.

Tall, thin creatures with insect wings. They greatly resemble dragonflies and butterflies. The male didaskaloi tend to have blue skin, whereas skin of the female didaskaloi is usually green. The didaskaloi have 2 pairs of wings.

The didaskaloi tend to be thoughtful and intelligent. They love to teach others and they hate hard work, which is why they are often perceived as condescending. They are mostly interested in metaphysical questions. Knowledge of practical use is only gathered to sell it to others.

The didaskaloi once were a hugely religious species that had ostracized a group of their species due to their different beliefs over 20,000 years ago. This group, known as the lucevian lived in isolation, eventually becoming their own species as they diverted genetically from the didaskaloi. Technology progress plodded within didaskaloi society, as many essential inventions are discarded as useless toys. Because of this, they were still at an early industrialization level of technology when they were discovered, luckily peaceful species.

Nearly the whole population of lucevians left their homeworld right away to avoid discrimination from their sibling species, and the lucevians who stayed eventually died out. The didaskaloi species continued with their march into space and obtained a spaceship.

After this discovery, many didaskaloi began to travel the galaxy as passengers and gathered knowledge from the more advanced species. Due to the conservative forces on their home planet, this hasn't led to much technological advancement, but the travelers began to sell this knowledge to the less advanced so that they could buy their own spaceships and protect their home planet with mercenaries.

The didaskaloi are governed by a democratically elected council of the wisest and intelligent citizens, but this provides them with little protection or power compared to what the mercenaries give them. Didaskaloi society is now well protected against threats from the outside, but it is more unstable than ever, as the wealthy progressive former travelers are starting to challenge the conservative council. Even with the committee becoming more relaxed on the rules, even when it comes to religion, finally allowing others to pick their own faith, and allowing the lucevians access to their natural homelands, those who have seen the wonders of space still challenge their rules.

None: There are many different patterns and wing types didaskalos can have but none of these are considered a subspecies.

• The didaskaloi have lost some of their practical knowledge because not many of them were interested in preserving it. There have been a few times where the didaskaloi had to buy back the knowledge they sold.

• A large group of didaskaloi thinks that the kuppa's work centered mentality is primitive and several kuppa Teas have been convinced to run art studios on didaskaloi funding. The didaskaloi are happy to help the kuppas out, but the kuppas find them condescending and won't return the favor.