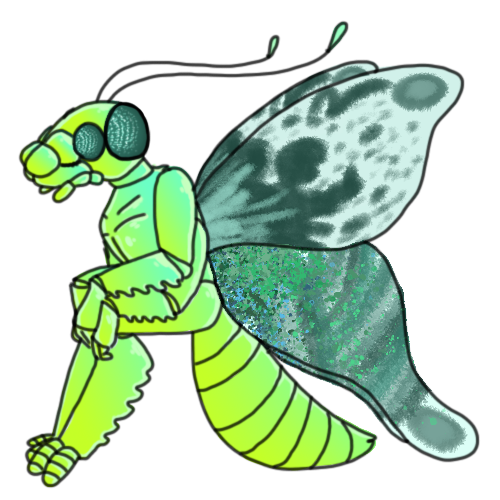 “t was long foretold that a divirot with wings like a beast's will save the land. It just so happens that divirot will be me!” — A divirot moments before charging into a fistfight with a random passerby

Attack Method: Use their lower arms to hold down a person, while using their upper arms to attack.

[Ambitious] Neutral trait
This character has strong ambition for a goal or several goals. They won't be easily dissuaded from a course of action. The ambition this character holds may be for the better or the worse.
[Confident] Positive trait
This character is confident in what they do and rarely ever doubts themselves or the people they believe in. They're able to trust people and can raise the morale of people they trust.
[Monomaniacal] Negative trait
This character displays an obsessive focus on a single thing or related group of things. It may be difficult to get them to do things unrelated to their obsession, and can be extremely agitated when their obsession isn't "respected".

The divirot worship the "Hero", a divirot who was prophesied to rebirth over and over to stop any greatl evil that would threaten their species, as well as the concept of fate.

The divirot are bipedal insects with two sets of arms and four large compound eyes. Their skin typically holds a metallic like sheen to it. They come in many different colors, however, it is hard to tell what color exactly, as they all appear to be iridescent. On their head are antennas whose length varies between long and short. The shorter antennas seem to be less common than the former.

They carry two sets of wings of their back, with markings that are said to tell the divirot of the fate that awaits them. For example, paint like splotches on their hindwing tells them that they will carry great intellect to be used for good. They come in many variations, all with various definitions that may even contradict one another.

It is obvious to many that divirots think highly of themselves. Believing to have a "happily ever after" in the end of their story, many of them hold a high opinion of themselves. Someone who was already born to be a queen cannot be horrible after all.

They may hold themselves to high standards, in accordance with their "fate." They will usually train themselves to become a person worthy of saving a kingdom or ruling it, or to be someone worthy of making a pretty good capitalist empire.

On the other hand, divirots tend to embrace change, yet fear uncertainty. If something in their life would come with the possibility of altering their fate, they would freak out. They cannot stand not knowing what would happen next, preferring to know everything with certainty.

However, the thing they hate more than uncertainty is tragedy. The idea mere idea scares them. Any divirots born with such a fate are immediately killed, unless saved.

Divirots, in addition, are surprisingly sociable. They enjoy speaking with anyone, chatting up anyone who is willing to listen.

The planet of Suin was once populated by the subspecies known as the "udivne", who looked as the divirots do, but with plain wings. Though they were stronger, and far faster, they lacked purpose. They lived in a village, knowing very little of change and knowing only peace.

Until one day, a udivne was born with markings on their wings. The other udivne believed them to have been sent by the gods. Unsure what to make of them, the others trained the marked bug even more than their own kin, raising them to be a great warrior.

The marked udivne couldn't have asked for a more happy childhood. And they never would again, for upon reaching the age of 15, their village was suddenly faced with an being they couldn't comprehend. They were not certain what it was exactly, but it was most certainly aggressive.

Their village urged them to flee, but the marked bug took their weapon and fought.

Upon watching their child brandish their weapon, they began to believe the gods sent them as a blessing. They called the child "Hero", who would live a very happy life until they eventually died.

They would not die without children however, and their children so greatly resembled them that the udivne believed them to be as much of a hero as their parent. They were called "divirot."

The udivne worshiped them, believing them to be gods, heroes, rulers or saviors because of their god-given wings. The divirots would soon populate greatly, until the idea of divirots being gods was a thing of the past.

The divirots soon became the main species of Suin, ruling over everything and believing in that fate will treat them well. The udivne and their offerings became forgotten- or at the very least, greatly scorned.

Suin orbits around two suns, with a single moon orbiting around it. It is known for its lush and rich greenery, as well as plently of ruins scattering around the area. Most of the planet is rumored to have been the host of great, heroic achievements. Since this planet belongs to a species whose lives are surrounded by such achievements, it isn't very notable.

Udivne: They resemble divirots, except with the lack of markings on their wings. Some of them are divirots whose wings have fallen or been chopped off. Most udivne despise divirots due to their "high and mighty" attitude, or despise the idea of fate as a whole. To them, divirots have simply let their "fate" get in their head, leaving the udivne ignored despite them helping them in any way. Divirots may return the hate in turn.

Revirot: A divirot whose wings claim that their life is to lead to tragedy. Though not technically a subspecies, they are noticeably different enough to be written as such. Strangely enough, most of them live happy lives- not that many divirots are aware. Any revriots are often killed on sight by the main species, and as such, they tend to hide their wings if a divirot is around.

Happily Ever After: For some reason, if a divirot is allowed to live its natural lifespan, they will always have a happy ending of sorts, regardless of their markings. A divirot with markings will often follow through with their fate, causing the prophecy to come true.

Most of the time, this is dismissed as a strange coincidence, as if a divirot dies early, they never get that ending they desired. The pattern still remains too strange to be ignored.

• Some divirots choose to ignore fate and go on living their lives. These divirots often report them starting to hear someone urging them to follow their destiny.

• Many of those who believe in limboism may find the divirots strange, or believe them to be anomalous.

• Divirots have a strange habit of calling people they deem unimportant to them or their fate "minor characters", with people they consider a little more important "supporting characters." This is often seen as rude, so remarks such as these are often only said by divirots amongst their own species. 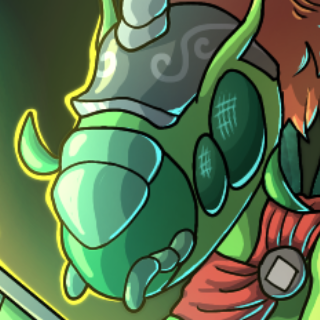 -Back to Species Menu-
< Didaskaloi
Drakon >