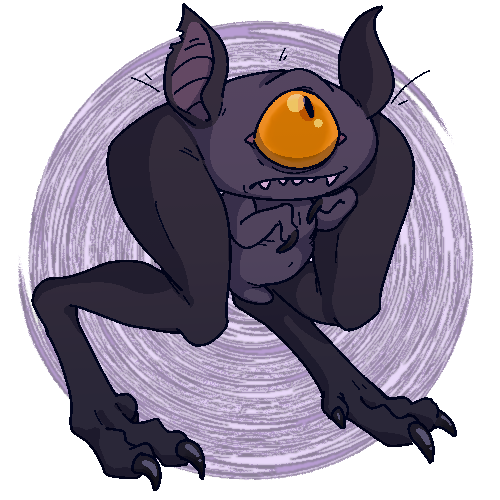 “Who needs arms when you have legs like this?” — Mettateeemen

Attack Method: Telekinetic attacks, and kicks if they still have their legs.

The eeemen have a wide range of beliefs and don't tend to favor one or the other.

An eeemen's body has two major sections, the first of which is the large, horizontal oval-shaped main body/head, which features a single large eye and a mouth that stretches from one end of the face to the other underneath. On the top of this body there are two bat-like ears, and inside, the eeemen's brain, which is abnormally large for its body size. Extending down from the sides are two long, muscular legs, although many eeemens have these amputated for reasons.

Underneath the main body/head hangs the secondary body, which is much smaller than the main body. This body contains most of the eeemen's vital organs besides the brain, and attached to this body are two tiny arms with a single clawed finger each; these are vestigial and serve no purpose other than to facilitate a number of gestures that eeemens use to convey messages supplementary to their spoken language, similar to sign language, but with less finger positioning and more arm positioning.

An average eeemen is two to three times as tall as an average humanoid, including its legs, but without them it is cut to about a third of its original height.

Eeemens can range from snow white to slate gray in color, but the most common color is a light, ashy gray similar to the color of the landscape of their home planet.

Every eeemen is born with a strong, natural short-range telekinetic ability which allows them to manipulate objects within about a meter's distance from them. They are also born with a 'sixth sense' often compared to a bat's echolocation that allows an eeemen to scan the area around them with peculiar "psychowaves," as an eeemen would put it. These waves convey information such as heat, texture, and chemical makeup directly to the eeemen's brain, making up for the lack of a sense of smell or fingers to feel things.

Eeemens are pure carnivores with immense appetites to feed their enormous brains and muscular legs. In fact, the majority of an eeemen's secondary body consists of the digestive system.

Eeemens are a very intelligent species, and often pursue knowledge in all of its forms. However, most eeemens focus on the practical use of knowledge, rather than theory or philosophy. Eeemens revel in new experiences that they can apply to solve future problems, and they have excellent memories to utilize these past experiences. Thus, eeemens often choose lives of adventure or exploration, full of new experiences and problem-solving.

Eeemens' love of practicality can, however, lead to them making questionable decisions for the sake of efficiency. Since eeemens are so tall, they cannot usually fit into the rooms of a spaceship of another species, and eeemens who venture off of their home planet usually have their long legs amputated and use their telekinetic abilities to move themselves through the air. This allows them to fit into a space approximately half the height of an average humanoid, although fairly wider than one, and also lessens the eeemen's voracious appetite, as the biggest consumers of energy in the body no longer exist. It can take a while for an eeemen to adapt to this drastic change in the way their body works, but soon floating becomes just as natural as walking used to be.

The eeemens evolved to be the apex predators of their environment. It is theorized that millions of years ago, the ancestors of modern eeemens used their powerful legs to chase down their prey, where they would slice it up with their long, scythe-like arms. After millennia of being at the top of the food chain, eeemens were free to develop their minds, eventually obtaining their psychic abilities, which they used to seize their prey once run down. While the eeemens had a powerful new weapon to utilize, their now unnecessary arms began to atrophy to their current state. And now, with their powers at the stage they are now, they no longer need even the factor that was most instrumental to their evolution, their legs.

• In order to deal with the excess of amputated legs after becoming a space faring species, the eeemen began selling the meat to other carnivorous species as a rare delicacy. Eeemen legs have become quite a popular dish as well. 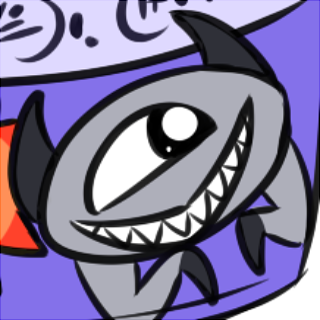 -Back to Species Menu-
< Ecton
Emoza >