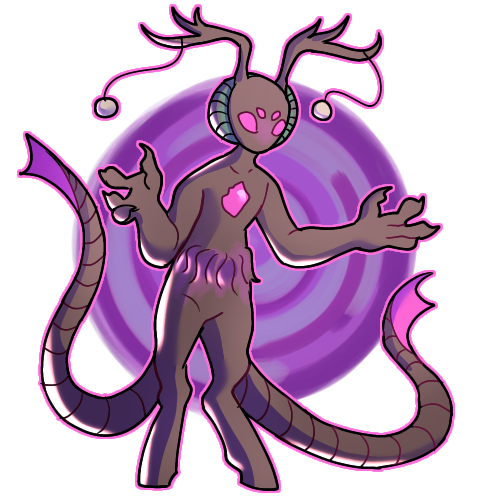 “We practically live through death of our bodies, so why would be afraid of them... Kihha, what do you mean that we overestimate them?” — Aefinha

Attack Method: Impaling and poisoning with the tails, if possible. Otherwise, just running away.

[Inventive] Neutral trait
This character is able to easily come up with new ideas and may be able to lessen the cost for current items. In a tough situation this character is likely able to use simple items to create make-shift weapons or items.
[Enjoys Corpses] Positive trait
This character enjoys whatever X is. While characters can like anything without having it as a trait, with this trait X is slightly more likely to pop up or be a starting item for the character.
[Obvious Weak Spot] Negative trait
This character has a specific part of their body that is easily distinguishable, ie a discolored patch of fur, a large gap in a character's armor/carapace, or an exposed organ. When this body part is struck by an attack, that attack will be treated as if the character had 0 Endurance.

Craheii do not approve any of religions. Some cults do believe in their own religion but those are rare and far between.

Craheii appear as humanoids with skin, visually similar to trees. Their rounded face with only four or six eyes hides under the place the craheii's chin might be, with a mouth full of sharp, dark teeth. On their head there are horns, with small branches from which grow short loose antennas with fluorescent bulbs of pale yellow or another color at the end. In the case of loss of antennae or branches, new ones will grow out of the horns in a short time, but only once.

It's not rare to see a four-armed craheii, although on their homeplanet two arms is more common. Four fingers on each hand are well suited for small complex handwork. The legs are not notable, though sometimes taking an avian or deer-like appearance. One of the most notable traits in craheii is their two long tails with large stingers at the end which are used for attacking, poisoning or impaling.

The most important thing, without which any individual cannot exist, is the gem at the chest. It's the real craheii, while the body is something dead and necessary for craheii's full functioning. The gem is asymmetrical with golden signs. The craheii believe their memories are stored in these words. These signs only appear when the gem, after being ripped from the body, finds a new one by growing its roots to another corpse.

Once a growing craheii gains a body the roots it used to grow originally become thin and falls off. That is why the chest's roots of a craheii are quite sensitive, being all that remained of the original growth platform. This sensitivity is the reason craheii wear clothes.

Once the roots fall, blood starts to run through the artificial insides and that is considered the true moment a craheii becomes alive.

Although a craheii is a gem in a corpse, they must consume food to avoid death. Once old enough a craheii's gem roots creates a new one and places it within the ground, ready to control another corpse.

Pragmatism, curiosity and a realistic view, these are the traits that are valued the most in a craheii individual. It is rare for other species to enjoy the company of craheii due to their weird obsession with corpses though. Craheii try not to associate with this trait to leave a positive impression, but they often fail, since they cannot see other species as anything but a spare body. This attitude does not only apply to other species but for other craheii as well.

"If you are not significant, then you don't need to be remembered." is a system that still dominates craheii's society and perfectly describes their relationships with each other. At least, this is what outsiders believe. Personal relationships with a craheii are difficult as the species doesn't appreciate personality as a concept at all.

Outside of the homeworld, one is more likely to meet individuals that think this concept is a societal pressure made to deceased the worth of individuals.

Craheii's gems are believed to be part of species that existed on Uencheei before, since many gems are older than even the deepest layers of junk on the planet. Eveiinhe, meaning "obsolete life", was picked as the name for this precursor species. It is believed, mostly in craheii cults, that the eveiinhe were able to see visions that were as true as reality. The death of the species occurred when Uencheei began to be rained upon by junk from the skies above. The eveiinhe predicted the event, and did not fight what they felt could not be changed.

As junk continued to fall, the bodies of eveiinhes became useless and rotten, except for the fragments of their gems. Over time these bits became one with roots left behind, fusing with the gems and became the first craheii. They did not look as they do now, but were similar enough. Unfortunately, the fauna of Uencheei didn't take the species' occurrence positively, causing the craheii to head underground.

While getting used to their new environment, interacting with the junk that killed their precursors helped with their development as a species. Eventually the craheii went back to the surface only to find out how much better it was above and refuse to return underground except to repair complex tunnels.

As the technical progress improved, the surface and the underground became more dependent on each other, while the craheii on the other hand were puzzled by their slowly collapsing bodies. Experiments on this subject lead to improvements in controlling their bodies and the creation of new subspecies.

A moment that is missing in craheii's history is their discovery by intelligent life beyond their own. It is believed that a group of stranded travelers, attempting to locate something that was left behind on the planet, or following a long dead distress signal first located the species. The unknown group, after obtaining fuel, took craheii with them onboard, dropping them off at a space base at the next planet before mysteriously leaving as quickly as they had arrived.

The most noticeable thing on Uencheei is the deep blue sky, which barely changes with the passing of the hour, and the pale small moon, which is almost always visible in the same place. Some feel that the planet is stuck in the dawn, some feel that there are no such things as days.

The strange but simple architecture above the ground is an iconic symbol of the homeworld, its structure dwarfed by what is built underground.

A less inhabitable part of the planet includes a marine forest which contains many trees. This is where most of the fauna of Uencheei lives after being shunned away and killed by craheii. Rumors of illegal activities happening in the forest are quite common even outside of Uencheei, but the harsh conditions of the marine forest very easily cast doubt on such assumptions.

The most important thing when describing the planet, that most mention, is the piles of craheii's corpses which can be found almost everywhere where craheii live. While approaching a pile is fine, touching it is condemned.

Elheii: The most common type of craheii outside of the homeworld and the one described here.

Delhii: Mostly called the "working class" or "nether technicians", delhii are believed to be the first subspecies of craheii. They are much more used to the underground and as such, would feel comfortable in the same conditions.

The biggest difference between them and elheii is that their limbs are more adapted to work due to their dexterity, and their tail grows precisely from the roots, making it more effective for self-defense.

Ilhecian: More social and less serious at a first glance, ilhecians are a recent subspecies of craheii, and thus only rarely can be seen off Uencheei. They are an example of how far craheii have come with experiments on their bodies. For example ilhecians are more likely to have artificial limbs than elheii.

Although they are similar in appearance to elheii, they are usually better physically, though are poor attackers due to having only one tail.

Rooted gems: Due to being just a gem with roots, craheii can take control of a dead body near them if their own was destroyed. Unfortunately for craheii, not every species can be used.

• When asked about how craheii were identified as an intelligent species, the most common answer is "We slammed the hatch." No one is sure about what it means.

• The word kihha can mean practically anything. But mostly it is used as a swear word.

• Most words in craheii's native language have "h" in them.