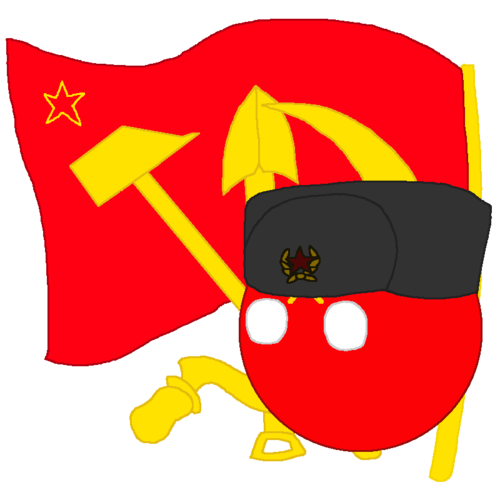 “What if there is another way?” — excerpt from Carol Marks's legendary speech: 'Why everything should not cost money'.

[Cooperative] Positive trait
When comrades work together, comrades represent the unified people, undefeatable and glorious.
[Unintelligible Accent] Neutral trait
Blyat.
[Chaos] Negative trait
A little bit of the motherland follows you where ever you go.

When the people work together, they have no need for gods. Filthy Imperialist Dogs are say that big evil bird made us before abandoning, but this is damn yusa propagandas.

Gods: No god but universal brotherhood and freedom for all under our crimson flag

You see, Ivan, all comrades should strive to be physically identical. This will stop the Imperialist Dogs from counting our numbers, da?

Comrades appear as red spheres with a slightly sticky texture. We have two white eyes, alert and clear except when they are for covered with the gas masks that are most popular accessory three hundredths year running. Most comrade does however have secret golden symbol of their personal homeland above the eyes, so many wear the hat of our land in order to ensure the maximum identicalness and cover this mark from the Imperialist Dog spies that are everywhere, behind every corner.

Some comrade do not have this mark, or it is of looking like something else. This is minor shame, but no big mark against a loyal brethren of the people.

Comrades lack hands and arms, for if you do not have hand, it cannot shake when you are the cold for of not existing. We are instead levitate all objects and weapons that we have the wish to pick up and hold near us. This levitation acts similar to invisible arms, with arm-like reach. But is not arms, davai, only fool would think it is. Comrades lack a mouth, instead simply absorbing any foods we would like to consume in accordance with how much we need to consume, as all true brethren of the revolution should. All of us Comrades are able to speak, but our vocalizations lack a direction and are the same volume from behind as well as in front.

Sometimes, comrades will look like bright red bears. Do not worry, this is normal too, especially if they have been standing outside while home radiation box is of the clicking. Comrades who are looking like this for whatever of the reasons will be likely to further change shape both in stature and appearance, although all loyal comrades are accepted into our society no matter how many eyes and leg the radiation has been made them grow!

All Comrades will only refer to other members of their species by the name “comrade" no matter how close they are to them, even though they are perfectly willing to call people of other species by their real names. Comrades are very friendly in times of joy and happiness, always willing to greet friend of friend and welcome into the group, to invite stranger to bread table, and to share drink with traveller in the night. However, when times are of the getting hard, trust is very much less a thing of our people, and we are known to become clannish and not welcome those who are not from our home.

Comrades exclusively use we/our. For example a comrade will never say “My bad” or “My friend”, instead they will say “Our bad” etc. They will talk this way even if there is only one comrade.

Our biggest hate is of the exploitation of peoples wherever they can be found, which we always are wishing to stop, whether by the making of the exploiter realise the error of their way or by shooting the oppressors and rising up above. Our philosophy is that life is hard, but life should be hard. For it is only through the struggles of life that we have the appreciate.

All comrades are having a uniform accent which is of serving two strong purposes - for the first, it distinguish us in body and mind from filthy Imperialist Dogs and promotes the unity of all peoples under one banner. Second it is sounding funny and we have the enjoy of it.

Come, baby Ivan, and let uncle tell you story. Once, long time ago, all workers lived in peace in Motherland. There was much plenty, and vodka for everyone, and each received potato according to their needs. It was a mighty era, but then bad times come.

Great bird enemies of comrades, known as yusa, they are coming across the seas and trying to tempt loyal comrades away from their people, to live in strange places ruled by greed and imperialistic ambitions. These people so stupid, they leave workers paradise to struggle in hovel ruled by dumb eagle-bird, hah! Anyway, in last attempt to being rid of cowardly foe, very bad thing happened. All the lands were blown up with terrible bomb, nuclear and worse in sneak attack by filthy yusa, and us comrade have to live in tunnel underground for long, long time. In many places, still do, can you believe!

When smoke clear, comrade venture out of hole and drop dead of the radiation. Such is life, but the next group of comrades were more ready and they found out that the yusa had blown themself up too, for fear of workers taking glorious revenge on cowardly strike. Some were of thinking that that was end of foreign yusa menace against beleaguered loyal peoples, but wise comrades discovered heinous plot - yusa had gone into hiding and would send us ex-comrades that they were of infecting with their bourgeoisie ideology, in attempt to undermine us from within.

Yes, little child! Very perceptive, these comrades are of becoming the Imperialist Dogs! Is not actual dog, very confusing in literal universe where everything else named like it is. Perhaps is not proper to speak of these foul beasts, but this is how you can be telling that Imperialist Dogs who oppose us are very bad, because led by secret ancient enemies of our people. Ever since, comrades of The Motherland are having to fight terrible monsters created in war, or after it due to pesky radiations. We are of training and prepare, repelling these beast so that when Yusa and their imperialist pig-dog lackeys return to destroy Motherland again, we will be the ready ones!

The Motherland is the most glorious planet in all universe, our beautiful home. Plenty of all life's necessities, such as snow, radioactive sky clouds, snow, derelict transportation network, and more snow. We are living in beautiful cities of planned excellence designed for to keep cold out. (Not too much cold out! Is good for proper spirit to be little cold, is why our heater not work). Many people are also living in secret railway tunnel settlements underground, is very popular place to be in areas of Motherland still full of monsters and the radiations and the worse things. What you mean, what monster? Ah, the monsters, of course. We are having all of the best anomalies and giant mutant beast in universe, almost none of foreign land are so full of glorious chaotic joy of people as we are being. Everyone who come here, they are remarking on the anomalies. Some anomaly good fun, others are Imperialist Dog trap left from long ago. Either way, is just show how good we are. Sometimes we do not hear from our brethren in the strange zones for long time. Sometimes we never hear from them again. Such is life, such is life.

/*Boris, I have seen this on the site of information by grey camera-having people! they are clearly of the plagiarise from our superior friendly summary!*/

"The Motherland, which is the only thing that the comrades call their homeplanet, is a cold, barren place. Tight-knit cities of long, squat buildings are still scattered across the post-cataclysmic snowy wastes, while many more eke out a living in tunnels, railway or otherwise, deep underground beneath the broken shells of the cities which existed before most of the planet was turned to unending radioactive winter by their war.

These settlements are sometimes abandoned without warning when the location of the dangerous areas shift, and the laws of physics begin to become slightly-more optional than is normal for Motherland. A generally chaotic place, The Motherland is one of the universe's few known major anomaly hot spots. It is very unlikely one visiting the planet will leave without experiencing some sort of anomalous phenomenon, comrade-related or otherwise. Our traveller warning level for Motherland has been "A tiger screaming endlessly into an uncaring wasteland of trees" for the last two decades, and all attempts to change it have gone poorly for all involved. Be careful if visiting between the months of January and December."

Imperialist Dogs:Enemy of state, traitor to all decent people, do not give time of day in glorious species entry.

Pyotr: Pytor was once a comrade until Pyotr decided to no longer work in the fields alongside comrades and took the name "Pete" instead. To betray Motherland is betrayal of life itself. Comrade who has written these words of enemy sympathising, please be reporting at once to labour station in tunnel-city of Cynika at once. We will be the knowing if you do not.

Better Red than Dead: Everything to do with comrades is red. Their name, descriptions, and even their traits. If the comrades name is written, it will become red, and if it is spoken aloud, it gains a sort of inflection that most would agree "sounds red." In addition, all of their traits are treated as if they are red, regardless of if they are neutral, positive, ability, or mystery trait. As such, anything that affects red traits is able to affect every trait, and similarly anything that affects other colors of traits won't be able to affect anything.

The People's Might: Comrades receive a one point stat bonus to all stats for each other comrade nearby, up to ten. This can not cause a stat to go over ten.

• This article is frequently mentioning a thing called a "sickammerovel". Now, if you are foreign visitor who does not know our way, this may confuse you so here is explaining. The sickammerovel is a special tool we created! Many confuse it for a hammer and sickle in our art and imagery, but this is not so. It is one tool that can be used as hammer, sickle, shovel, pick, and much more! Every comrade is of possess at least one. We are given this at birth, and we will die with it. Report any comrade without majestic sickammerovel to the people. We will handle it, da.

• If in an area administrated by a collectivist workers council on the comrade homeplanet, it is entirely possible for a subversive and unexpected reversal of the typical rules of cause-and-effect to occur.

• If something in this article is seeming to of contradict itself, do not change it! Debil, this is no error, we do not make mistake! Is clever ploy to throw the scent off the filthy Imperialist Dogs who are hunting for facts, da.

• The comrades refused as a species to be recorded into the Cosmosdex without allowing it be edited by anyone for a short amount of time. It is unknown how much of this information is correct, exaggerated, or even how much of it was written by comrades and not some pranksters. Still the rules of their demands were met and the comrades appear to be delighted with "The People's" work.

-Back to Species Menu-
< Cnidan
Conscience >