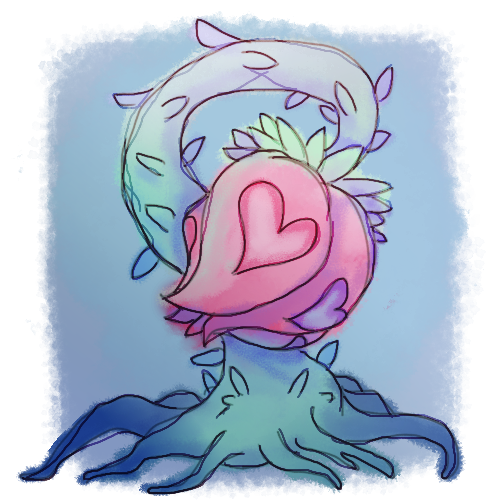 “Wait I can write my own article?” — This author's conscience

Common Jobs: Shopkeeper, manager, guard
Likes: Their host, anything their host likes, meat
Dislikes: Being alone, people who harm their host, whatever their host dislikes

Attack Method: A powerful bite followed by rolling their bulb to rip off flesh with their razor sharp thorn like teeth.

Consciences tend to follow the god of their host and don't have a strong opinion for any one specific god.

A conscience at first glance is a rather massive flower. It is either in a state of blossom, or having its flower shut tight in a bud-like form. They usually take on a multitude of colors, depending on the biome they grow up in. One could easily be forgiven for thinking it is nothing more but typical flora by its looks, but a conscience is much more than that.

While a conscience is a flower, it is also sentient. The lengthy stem under the flower has tremendous freedom of movement, able to coil about itself like a snake might do. Near the bottom of the conscience are a group of tentacle-like roots, which are usually buried in a patch of dirt or another creature. They often leave a small amount of these roots in the air to grip onto objects. If the plant is on its own, it is able to use these roots to drag itself across the ground, much like a cephalopod might do, until it finds something to bury itself into.

The head of the flower has 3 to 7 petals on it, each of which can move independently of the others. On one side of each petal is the smooth flower itself while the inside has rows of thorn like fangs going down it. In the center of the flower is a thick tongue, which secretes a sticky sap like substance that is known for its sweet aroma and taste. The tongue is also able to stretch itself out, being quite flexible and prehensile like their tentacle-like roots. Below the flower tends to be a growth of other flora, that vary depending on where the conscience grows up. This can range anywhere from other flowers, mushrooms, and even to rare fruit like bananas.

Individual consciences in the wild are no more than flora, waiting patiently for a creature to come near it. When someone does come near, it devours them, lets them steal a seed, or attaches to the creature to use it as a host for transport and food. After gaining a host, they then protect said host viciously. Consciences can become so integrated into the creature that it doesn't even try to remove it.

When a conscience takes root or grows directly from an intelligent species via its seeds, it connects directly to the host species brain. This allows it to learn and experience the world through them. A conscience gains all the knowledge their host has, allowing them to speak, see, and sense as well as their host. While they can tap into the optics of their host, consciences also happen to be able to see in infrared vision. This allows them to still be able to see in case they cannot access their host's sight or realize using their own vision is more beneficial.

If a conscience were to grow directly from another species, they would gain traits based upon the host's species. For example, they might grow a superfluous amount of leaves if the host has a lot of feathers or a more bark like exterior due to a tougher-skinned host. Not only do they gain physical traits, they can copy genes that might be uncommon otherwise. This allows a conscience to survive and adapt better in the environment their host inhabits.

More than anything a conscience loves its host, letting anyone around them know how special or important their friend is. They will not usually butt into a conversation, although they'll appear to be uninterested to what is being said. The moment an opportunity pops up, they will shower their host with praise. They tend to have trouble communicating as they often ask their host to speak for them. When they do speak, it's slow and deliberate due to their petals ability for independent movement and their oddly shaped tongue.

Due to their limitless love over their hosts, consciences will relate to the species that their original host was. They'll join their culture, and act as though they were raised as one of them, which the conscience may as well have been. A conscience will wear items, when possible, that are common among their host, worship similar gods, and have wildly varying personalities to other species. They do not mindlessly follow their host though and will create their own opinions of others. Typically a conscience will become more intelligent than their host.

A conscience will always watch out for their host and have been noted to improve the lives of those they are attached to. They can notice things their host doesn't, weigh in on if they are making a poor choice, and try to lead them in a better direction. Consciences tend to be amazing at de-escalating a conflict by showing their host a different perspective to events that occurred. One would be hard placed to find a person with a conscience who truly hates them.

The first appearance of the consciences were when jardinero, a species known for using plants on other planets as a form of war, took the consciences and weaponized them . The plants themselves were horribly invasive, protecting fauna they attached to, and causing chaos in the industry of any planet they were set upon. For centuries they were despised as a plague, weeded out on any planet they were set upon, until they were spread across the klannec homeworld of Nekxurius.

Consciences were problematic for the klannec, but not as big an issue they had been for other species.They were mainly a minor pest until a conscience seed managed to take root upon a high class klannec, upon which they were quickly integrated into their society, and tended to. With knowledge that conscience could be sentient, and understanding how they think much better, they were able to calm down the spreading population, and even properly introduce them to the universe at large.

Consciences, being known for quite some time as a terrible weed, took some convincing to be allowed proper circulation through the galaxy. Many species still did not trust the plants, but the klannec were willing to help any species with an outbreak with one simple request, to "Treat any conscience that grows from your species as a member of your own." Once enough consciences were given sentience on a planet the outbreak of seeds would slow down, and the wild species were much easier to understand and handle. Some species refused to respect their consciences, being forced to spend resources to eliminate them from their planets. Even today wild consciences are considered an invasive species to many.

The original conscience from that first klannec took their hosts place long after they were gone. Despite being offered the same position, they wished not to overstep their bounds in klannec society, but were more than happy to keep conscience relations in the universe for their old friend.

Anxiety: While consciences always favor their host, some are born a bit different than others. Not differing too much from a normal conscience, once in a while one will overly worry about their host, questioning everything they do and everything they say in an effort to protect them. This conscience might cause their host to avoid going out and doing anything, for fear of something as small as a crack in the sidewalk, else they trip and break their neck. This is only classified as a subspecies because it seems to have a high chance of persisting through the offspring of the specific conscience.

Devil's Advocate: Sometimes when a conscience grows it splits into two separate bulbs. These twins have a strong tendency to give different opinions on any situation that occurs for their host. While it can be annoying for the host to listen to, it helps give their host options, instead of only having one choice offered to them by their conscience.

Rise Flower: Rise flower seeds are highly illegal. This conscience will take control of the body from within as it grows, taking over the processes of the body, before eating the hosts head from below, taking its place as they gain the body for themselves. They seem rather sad about this, having memories of someone they will never meet. The species themselves are legal to have around if they have their ability to produce seeds removed.

Little Ship of Horrors: If a conscience eats a large amount of food, it will distribute the energy to its host, often times making them feels more energetic and healthy. It has also been shown to slightly speed up the effects of healing.

• Consciences will act like they are not paying attention, while constantly communicating to their host. They can be rather talkative in their hosts mind.

• A consciences sap is affected by the fruit it grows, cocoa seeds producing chocolate sap, jalapenos create a spicy sap, and so on.

• Due to a consciences borrowing a hosts genetics, a procedure that implants a seed into a developing infant has been created. This helps fix some genetic defects, like weak hearts. Consciences tend to gain inheritances from species they outlive, so are treated as their host, gaining social status and the like from it. For example, if a music artist dies the conscience would have learned many of their songs and singing style.

• The lifespan of a conscience can either increase, or rarely decrease, based on their host.

• When a consciences host dies they will rarely take another host out of respect of their friend. 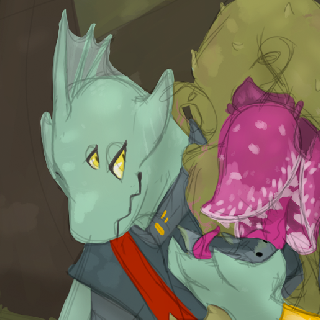 -Back to Species Menu-
< Comrade
Contractor >