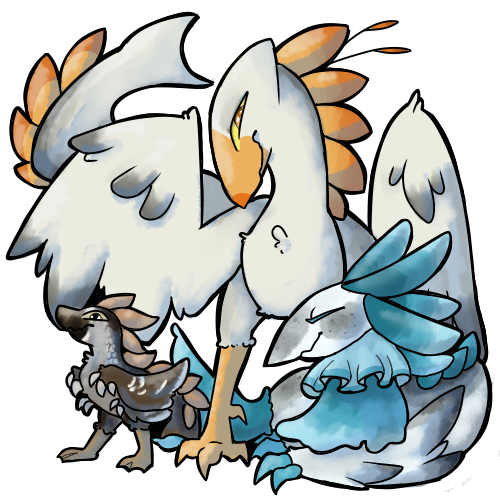 “A fiend keeps a sharp smile along with a sharp beak.” — An old yet common Illusorii saying.

The screegull is a large predatory bird with a serrated picaxe-like beak, These serrations make its mouth look like a jagged smile. Though screegulls do not possess true teeth the structures on the roof of the mouth that point back towards the throat aid in eating more slippery prey and contributing to nastier bites. A peck however is equally if not worse than a bite. It has been recorded that screegull pecks are powerful enough to shatter stone.

Their talons are no joke as well, being quite sharp and easily able to tear through flesh. Many screegulls opt to use them to pick up rocks to drop on unsuspecting prey though.

Lower down the body is a long shark-like tail used to balance the bird's body and to occasionally whip at other creatures and cause them to topple over.

Screegulls are hard to miss due to their obnoxiously bright feathers. These feathers are sleek and quite pressed down against the gull's rough skin as not to cause drag. Fledgelings will shed their very fluffy down as soon as they reach adolescence.

There is a crest of contrasting yet equally bright feathers running down the gull's back along with some fins. These feathers flare out in mating displays that involve the infamous "Screech songs." This vocalization contains the aforementioned screaming, mixed with imitated noises near their nest. Many people have used this knowledge to teach screegulls how to swear.

Though it seems both male and female screegulls have the same bright gaudy coloration, Males possess more crest feathers and are smaller than their female counterparts. Females possess small claws on her second pair of wings, These are used by a mother gull to grab her chicks by the tail and away from danger and is much gentler than using sharp beaks or talons.

The average screegull is described as mischievous, loud and bores easily. This leads to the gulls spending a lot of their time searching for creatures to chase and toss for amusement. When it becomes bored it will release them, scared, scared, but alive. This capturing of smaller creatures seems to differ from when the gulls hunt. As the targets of this 'Catch and play' are often too small to be their usual prey. Screegulls will also play with members of their flocks often chasing one another and teaming up to annoy other fauna.

Some "playthings" will be kept in their nests. This behavior is more common in new mother gulls and ones that have lost chicks. These gulls will feed and protect their captives, Even going as far as fighting their flock members who try to eat said captives.

Screegulls are quite reckless creatures. Younger gulls will peck and harass a larger animal until it either leaves or retaliates. Leading to high mortality rates for fledglings, though ensures that only the strongest and fastest will make it to adulthood.

The gulls hunt in flocks and mainly go after medium to large prey. These groups split in two to trap their quarry between them. One half will loudly screech and chase the prey to the others who will then go in for the kill.

Screegull trainers on Nukotii have utilized this herding of prey to keep the massive legged whale fauna from trampling farms and cities. Though training the birds is quite difficult as they are fickle and will even do the opposite of what is asked as a joke. Some have resorted to reverse psychology to get the birds to do what they want, which has actually worked.

Due to the gulls' heavy dislike for silence, trainers must invest in white noise machines or constant music for their flock. This leads to the birds imitating the white noise or singing the songs played. Which is pleasant until the screegulls collectively make the noises out of sync.

Capture Creature: These screegulls have been modified to serve as notail capture creatures and the bane of notail children. Examples include the less deadly but still as rambunctious variant for F-class children, known for harassing their owners and laughing until "arrested." The fluffy cute yet flightless M-class variant that has too many children and kills their enemies with swarming, and the N-class variant trained to scream verses from the book of Neo and only stop when the next verses are screamed back.

Serrasa: Serrasa gulls are a subspecies that live in areas too small for normal screegulls to roam. They heavily rely on being in groups and are timid scavengers. Their beaks are hooked and curve downwards and have small claws on all four wings for climbing trees. Though they are skittish on their own, in a group they will rip and tear prey and potential threats. Attacks from serrasas on people rarely occur and they are even kept as pets.

Cyreine: Cyreines are a rare subspecies that are eel-like in body shape and walk on their front set of clawed wings. Other than their body shape the most notable features include the two frilled collars on their necks and the pale pastel colors and flat black they exclusively come in. Unlike their relatives these gulls are seemingly silent and calm, Their serene peaceful demeanor however is a farce. The moment one would step into the cyreine's territory is the moment when its facade drops and it viciously attacks. These gulls are silent until they near their deaths, in which it will sing a beautiful song before passing away. For what reason is unknown.

Colorful Condition: A screegull's overall wellbeing can be monitored by how bright their colors are. A healthy gull will have vivid eye searing colors while a very unhealthy one will be dull and almost gray. Gull dulling may occur when the screegull is sick, hungry or starved of attention.

• Screegulls have been symbols of fear and death for the longest time in illusorii culture. But in recent times after more research, There are active efforts to give the birds a better reputation.

• Those who train screegulls are often doted upon by their gulls. The birds will try to feed their trainers and preen them, They also can become jealous of gulls from other flocks if the trainer gives them attention.

• The most common noise to come out of a screegull's beak is other than screeches are loud cackling and laughter.