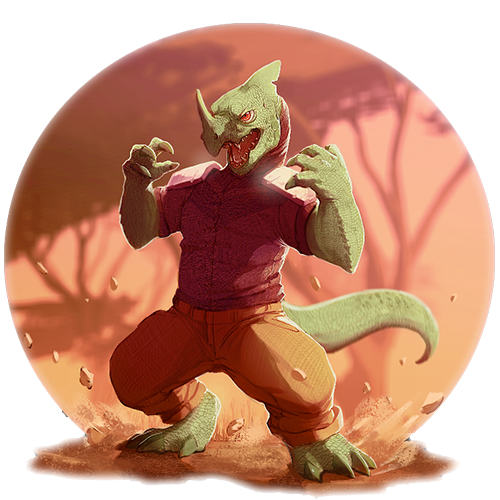 “What in the world are you talking about you disgusting clockwork?” — Noverus Rayson

Attack Method: Attack as a herd. If you must die you die fighting. Highly defensive.

What gods the arma honor vary widely from arma to arma. Armas do perfectly know that they are considered a holy animal to a group of people.

Armas are large and rhino-like. They stand at about 6 feet tall and tend to have long tails ending in spikes, which they use for defense. These tails are often times very fatty and can keep an arma alive even during long periods without food. The armas are bulky and built to take more than a few punches. They commonly wear armor covering their whole body as a status symbol.

They come in only earthy tones of brown, gray, and green and there's no way to tell the difference between a female and a male by looks alone. Armas have poor eyesight and are plagued by eye conditions. They do have a great sense of smell on the other hand, and this is the only way they can tell at a glance who is a male and who is a female.

Armas are kind, sociable, and generous.

On their own planet.

When not on their homeworld, they're ruthless and follow a strict social ladder system. They're absolutely racist and will put down any other "lower" species without a second thought. If a higher species puts down an arma and insults them, the arma will think nothing of it. They believe people higher on the social ladder are almost always right. They are fiercely loyal to their captain and will die for them without thought. To them, dying in battle is an honorable death.

When an arma loses a leader, they instantly begin to panic and mourn over the leader, assuming the loss came about as a result of them being killed, even if the leader has just decided to retire or step down. Due to this arma generals by tradition fake their own deaths and retire under a new name to keep the "spirit" of their old self alive. If their leader is killed in battle armas will protect the corpse of their leader, willing to risk their lives to make sure the corpses can be respectfully disposed of. Due to this fact it's important to not have an army of just armas, as even if 1000 armas were fighting 100 people, if the leader were to die all 1000 of those armas will become wrecked with panic and give up.

Armas fight each other in battles all the time. If an arma wins against another, they are free to take the armor of the loser. They will commonly swap armors if the other's armor is better, but if the other did not put up a good enough fight they will be shamed with having their armor fully taken away with no replacement. Armor is the lifeblood of any arma and being without any is worse than being naked.

The arma homeworld wasn’t always ruled by the armas. Long ago there lived a species called the brodskul, large crow like birds whose head was a covered in a hard skull. From the very moment the brodskuls could pick up a stick and swing it around, they have been in an endless war. In the middle of this war was an animal called the arma. Normally the arma walked on four legs and used the long claws on its front legs to dig for roots, but they were known to stand up and walk and climb trees if they were especially hungry. The armas were utterly peaceful despite their nasty looks, and would commonly be seen grazing in the middle of war fields with not a care in the world. These arma were the cattle of the brodskul world, their pack animals, and a holy animal to the brodskuls. No arma was to be killed for their meat, instead they would be only eaten when they died naturally.

A brodskul country became tired of the constant war and fighting. They built a giant mega bunker over the course of many years, and once they had tested it, they entered it with many of their farm animals and pets.

Then the rest of the world was bombed in an event called the great cleansing. Any brodskul who survived the bombs would be overtaken by the radiation soon after.

In the bunkers the brodskuls decided they had lost the right to be allowed to rule the world above. They had decided to train their most holy of creatures, the armas, for the day they could be let out again. With selective breeding they made them smarter, got rid of their claws so they could grasp items better, expanded their lifespan and got them to stand upright. The brodskuls on the other hand grew smaller, took up less space, their lifespans became short, and they themselves became humbled.

The brodskuls and armas didn't leave the bunker for many ages. Once in a lifetime a group of brodskuls would go outside to venture into the wasteland to check how the planet they once destroyed was doing and reintroduce animals they had protected. Finally once conditions were perfect, the bunker doors opened and the armas were let out to be free.

The armas would shamble out into the recovered planet, eyes skywards as for the first time in many generations they could see the endless expanse above them. As predicted the armas would slowly populate the planet once more, now on peaceful terms as the armas were united as people. Nearly all fights between armas were quick one on one fights that almost never lead to any injuries. The brodskuls had considered their work done and live side by side with the arma, their populations low, and their main source of food being armas who finally draw their last breath.

When notails arrived on the arma planet the arma's quickly determined that they were better than the notails because they were physically stronger. The notails showed the armas weapons of war and the concept of money equaling power. The brodskuls lamented as they felt that their careful work was being undone as the armas took great note of these new found ideas and the thought of a species social ladder.

The armas were tricked, and would go on to form one of the biggest intergalactic military ever seen. They believed that those higher on the ladder were better and thus more fit, despite that they themselves were labeled as just barely above low class. It became a game for species to try and change the arma's view of another species on the social ladder in an attempt to gain a higher placement on said ladder, such as telling the armas that X species kill those who have tossed their weapons aside and surrendered without mercy or thought. The arma social ladder is the most common ladder referenced. Armas know the whole ladder by heart and even check if it has updated every week.

Despite all the war armas now fight and the way they act off their planets, the moment armas get back home they go back to being the extremely docile grass grazers they've always been. The brodskuls are relieved to know that despite the odds put against them, there will be no 2nd great cleansing.

The one horned arma: tends to be a bit shorter and faster than other armas. They rarely have spikes on their tails and they wear lightweight armor.

The two horned arma: is known as a "bloody hippy" to the other armas. Their tails are as thin as a stick and ends in a tuft of hair. Even off their home-planet they're peaceful and respect all species. Still, in true arma fashion they cannot betray their leader.

The three horned arma: is the largest of them all and reaches over 7 feet tall. Their tails are absolutely covered in spikes and they barely need armor at all due to their insanely tough hides. They are the only armas who might fight back when degraded by their leader.

Undying morale: As long as the leader they know and love is still in charge, an arma will never lose enough morale to leave their crew. If the leader dies on the other hand, most armas will instantly leave.

• Armas are herbivores and do not eat anything other than plant life. Some armas are trained to eat meat when plants cannot be provided but they cannot survive long on it and it quickly makes them sick.

• While they are vegetarian by necessity, they also usually tend to be vegan due to cultural reasons. Armas are very strict about such things as not eating eggs or drinking milk.

• Armas are born with ears. These ears are docked or cut off after a few years to prevent the ears being pulled at in fights. 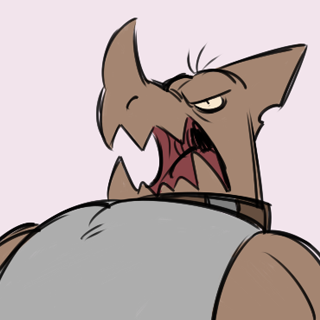 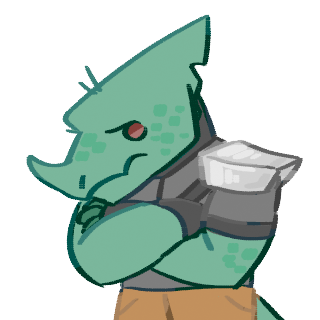