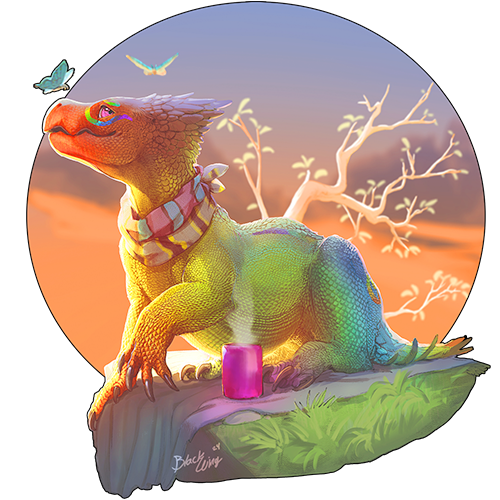 “Our precious Rainbow has gone missing, and we dearly miss her. If anyone comes on planet please let us know if you spot our darling little Scarfie.” — Last signal that repeats around Torenza

[High Tolerance] Neutral trait
Rainbow enjoys meals with stingsy, and doses of butterfly venom over time has granted her a resistance.
[Adorable] Positive trait
Rainbow has a sweet demeanor and a dazzling coloration, making her quite the rare and exotic pet, though anyone who tries to capture her has to deal with her guardian.
[Houdini] Positive trait
Rainbow is frequently caught by poachers, but is able to get out of any trap, and even frees Stingsy should they get captured as well.
[Good Dodger] Positive trait
Stingsy trained Rainbow to avoid attacks so she would be safer. Rainbow didn’t appreciate the attacks, but she still managed to avoid them over time.
[Long Life] Positive trait
Butterfly venom has done odd things to Rainbow over time, she is still in quite good health, and looks like she’ll be alive for a long time to come.
[Tactician] Positive trait
Rainbow seems to lead Stingsy in fights through gestures and actions, making the violent butterfly’s attacks become more focused.
[Frequent Sleeper] Negative trait
Butterfly poison has it’s side effects over time. Stingsy is happy to join Rainbow for her naps.
[Look at me!] Ability trait
Ignore the giant butterfly! 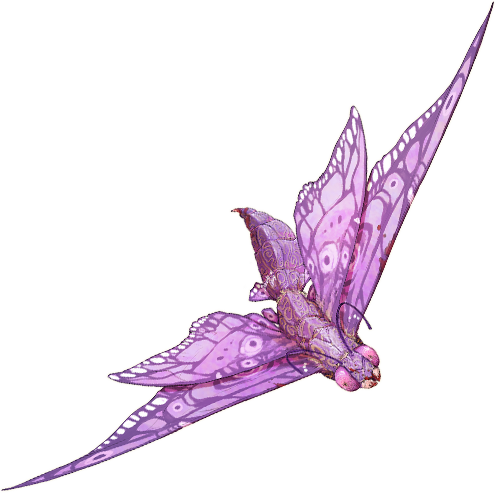 “You’re such an adorable little creature, you. Wait, who’s your friend over... OH FU-!” — Last words of yet another aftik

Job: Murderer, Rainbow’s Playmate
Likes: Rainbow, Murder, Nap Time, Play Time, Friends of Rainbow
Dislikes: Disruptors to Playtime, Disruptors to Nap Time, People who hurt Rainbow
Notable contributions: Being the only butterfly to not murder a potensial meal, and instead befriend it.

[Childish] Neutral trait
For a butterfly, Stingsy spends an unnaturally long amount of their day playing with Rainbow, and from what reports show, that shows no signs of changing.
[Multitarget] Positive trait
Stingsy is skilled in combat, and is known to push themselves to their limit to be able to defend Rainbow as best they can. This means they attack more times than your average butterfly ever could.
[Thick Skin] Positive trait
Stingsy is known to push beyond their natural limits for pain in combat scenarios, especially whenever Rainbow is in danger. This doesn’t stop them from feeling pain, but it does not break their battle focus.
[Clingy] Negative trait
Stingsy has been with Rainbow almost their entire life. They couldn’t imagine life without them.
[Easily Agitated] Negative trait
It takes little to anger a butterfly, and Stingsy is no exception.
[Killer] Negative trait
Like all butterflies, Stingsy has no qualms with murder, as it is their way of life and their number one way to solve most problems.
[Revengeful] Negative trait
You mess with Rainbow, you better expect Stingsy to never let you live that down. Preferably with your life.
[Guardian Angel] Ability trait
A controller trait. Stingsy has two traits linked to this trait, and looks after Rainbow. When Rainbow is in peril, [Forceful] will activate until she is safe, and when Rainbow is badly harmed, saddened or killed [Going Berserk] will activate until she recovers.

Rainbow is a scarvie that is around average height, though is a little heavier than a normal member of her species. The main draw of Rainbow is her dazzling arrangement of colors adorning her plumage, which makes her a rare spectacle among scarvies. Her eyes match this style, with a sliding variation of colors circling around her pupils. Atop her snout are two stripes that move up and circle around the edges of her eyes, with a similar stripe sliding down her back and curling into a swirl upon her haunches. She seems to wear a variety of torn scarves gifted to her.

Stingsy shares many of the same features as a typical butterfly would have, with a few noticeable differences. For starters, Stingsy stands at an impressive 8 feet tall, a whole foot taller than their average counterparts. Their backside is adorned in a few crude drawings put in place by Rainbow, made from a mixture of various substances that are mostly unknown in nature, while their front side has a darker, lavender coloration. The general pattern on their front side is different as well, blending into multiple different swirling patterns, but the splattered effect on the wings remains the same, interrupted only by the occasional patch of dried blood.

Rainbow is a sweet little creature, usually found wandering around areas looking for items or people of interest. When she finds someone she usually gets very personal with them, looking for attention. She will do anything to get someone to like her, playing with them, helping them out, and just being adorable in general. Rainbow is a massive distraction, and even if her target isn't killed something is going on when they are not looking.

She is the brains of the duo, using her disarming personality to either help Stingsy move along without being noticed, or helping lure prey out into the open for Stingsy. She keeps an eye out for the most dangerous threat to her friend, and alerts them to this, making sure their butterfly guardian is safe.

Stingsy, on the other hand, is the much more savage of the two. Sure, Stingsy is known to spend large chunks of their day playing and spending time with Rainbow, much friendlier behaviour than any other butterfly has ever shown, but do not let their playful exterior fool you. Underneath holds the heart of killer, and they will not hesitate to emerge from the shadows should Rainbow become endangered, expending all of their available energy to ensure she comes to no harm.

This muscle is typically unfocused, being the strength of the duo, but with Rainbow showing them where to strike to bring down their foes, their attacks find their marks much easier. Multiple times Stingsy has made sacrifices in their attempts to rescue their beloved scarfie, whether it be going without food for weeks, dislocating a wing, or taking near fatal blows just to land the final strike needed to take down an opponent. Should Rainbow ever near death's door, Stingsy will fly into an unbridled rage, magnifying any of their previous abilities to ludicrous extremes, until either they or their foes lie dead. And Stingsy doesn't plan on dying.

Rainbow was born on a resort planet, part of a breeding program to create the most dazzling color of scarfie possible. Out of her siblings she got a collection of genes that gave her, instead of a couple rare colors, a large assortment of colors coating her whole form. She was the main attraction, the dazzling rainbow. She was raised to garner attention, taught tricks, and for a few years she would be on display for all to see, until a group of thieves came and captured her, slinking off into the wilds of the resort to sneak her off planet.

Before they could make their way offworld, however, they were intercepted by a rogue butterfly hatchling, each of them trying to run for their lives before inevitably being slaughtered, as evidenced by their corpses found by a search party the following morning. How Rainbow's and Stingsy's first interaction went is unclear, as any possible witnesses to the event are dead, but it is theorized that Rainbow used their natural born charming effect to halt the butterfly's initial attack, and ever since, has needed to rely less on less on their charm to keep Stingsy by their side as time went on.

Soon afterwards the resort planet went silent, and sightings of the rare rainbow scarfie began to show up in different areas of the universe, along with reports of butterfly attacks in the same areas. Should anyone encounter a rainbow scarfie in the wild, we at the Cosmosdex strongly advise treating them with utmost care, and getting out of the area as soon as possible. Even if it is not the same Rainbow mentioned in this article, it is still better to be safe than sorry, and hope that you are not next on the list of victims lost to the duo.

Forever Friends: Whenever Rainbow and Stingsy are separated they always find their way back to the other. Always.

• Stingsy has been known to bring the hearts of freshly killed victims to Rainbow, as well as any ‘neat trinkets’ or scarves; a twisted display of affection as her caring guardian. They are well received gifts, the best on which in Rainbow's eyes being carried along with them on their travels,, but that doesn’t make the act any less terrifying.

• Scarvies have been known to go missing for periods of time, before hurrying back to their owners in a panic in areas where Rainbow and Stingsy were spotted.

• Stingsy has been seen with Rainbow riding atop them before a massacre has occurred. Many artist depictions of this event can be found, but none of them are truly as brutal as the actual scenario.