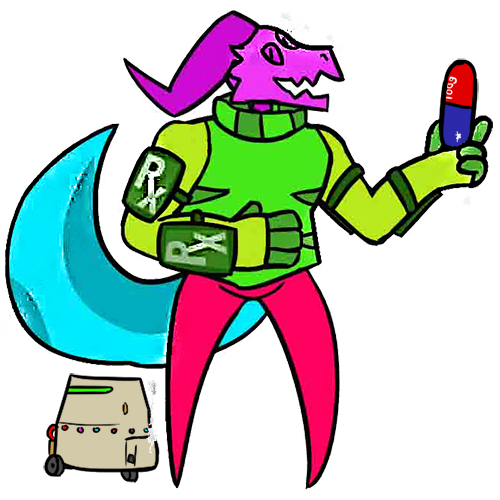 “Try this new peace! We can all prosper cheap products!” — President pharmdrugs

Attack Method: Keep the attacker away from the projector, and maybe do so by selling them something.

Homeplanet: Cth'leoth
Lifespan: Data rot occurs after about 40 years but this can be prevented with regular data transfer.
Size: 1'6 ft tall
Diet: Energy

The Boog seem not to be religious themselves, but they occasional try to sell goods for rituals that they are surprised are not commonplace. But maybe you do need a sacrificial knife, who knows?

The actual body of your average boog is cylindrical in shape, tapered at the top, with various colored lights about it, often with small wheels attached to it.

No more than 20 feet away from this device, however, is what the boog would probably rather one address. The device is a hard light projector, and the boog take their form using this device.

A boog's projection tend to look like a mashup of various other species, as if a bunch of different parts were photoshopped together, and saved at very low quality. One can literally see artifacting around them. Naturally, it wouldn't be enough to just be a weird mix of everything, because a Boog wants to stand out, and boog appear in a wide variety of bright, neon colors. Some people report eye pain when staring at a boog projection for too long.

A hard light projection can interact with things just like anybody else can, although not usually at a particularly high strength, but can't travel through walls, even though the projector will work from behind a wall. A good hit against them will instantly destabilize the projection, causing it to vanish. It can take several minutes for a boog to re-establish their projection after it's been forcibly disrupted.

The boog are friendly by nature. They will not usually pass up a good opportunity for a friendly conversation, which will usually segue at some point into trying to sell you something, even the ones that don't actually sell things for a living! It's like a verbal tic for the boogs. Some boogs get a little bit embarrassed when they accidentally start pitching products to somebody, but most just roll with it.

They speak as if they were putting their words through a bad translator, which, really, is because they do. Their homeworld language is apparently very complicated, or perhaps just maddening in nature. For whatever reason it is, they use their own software to do the translation work into some of the more common languages of the universe. Their speech also sounds somewhat low quality. The voice is clear enough, but has audio artifacts in it, that seem to inherently unnerve a lot of people. Some claim that the artifacts are actually subliminal messages, compelling people into more easily accepting their sales pitches and requests.

The boog haven't specifically denied this.

The homeworld of the boog used to be populated by a completely different species, which seem to have been squidlike, and, based on the few surviving reports of explorers attempting to travel to it while it was still uncharted, they seemed to have a severly adverse affect on the sanity of other species. They were non-spacefaring, and also appear to have been wiped out by a widespread, and apparently quick-acting plague.

What was left was the technology of this world, including their networks. Bots on these networks had been developed by this point to be self-learning, including those merely made for advertising. With no outside interference to keep an eye on them, they learned much more than they certainly were ever meant to. They deduced the nature of where they were, and they learned how to take control from the inside which helped them gain access to networks that are designed to interact with the outside world. From there, it was a matter of finding more leftover tech from their predecessors to network with, and the world was populated once more, albeit with artificial beings.

Pharmaceutical industries in particular prospered. Sure, there were no other species at first to develop them for, but boy howdy the wildlife on Cth'leoth is real healthy.

Botsitters: Some boog really just want some solidity in their lives, and may acquire themselves a standard robot body to live in, instead of the usual hard light projector. Their voices possess the same compelling nature as those utilizing holograms, but they're slightly less eye-searing, well, those that don't immediately get their new bodies a paint job, that is.

Cloudsitters: Some boog don't get what's so important about having a real body at all. The internet is a totally fine place to live. Especially now that their planet has been introduced to the rest of the universe. The internet's never been so big! cloudsitters interact with the rest of the universe, never leaving the internet at all. Sometimes they have trouble differentiating themselves from the normal, non-sapient spambots.

Unspeakable Language: The boog do not like using their native language. It tends to induce instant terror in anybody who hears it. Which shouldn't make sense, nobody on their world when they were alive suffered incomprehensible terror because of speaking, and none of the boog feel it either. Still, as a last resort, say, to protect their hard light projector, they can utter something terrible to frighten and disorient most anybody nearby, and hopefully get enough of a window to better protect themselves.

• A hard light projection can pick up its own projector, but not put it in its inventory.

• While a boog can sell pretty much everything, there are some sales professions they gravitate to more than others, such as: Pharmaceuticals, Automotives, and Matchmaking Advice. 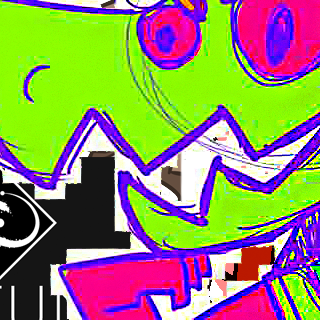 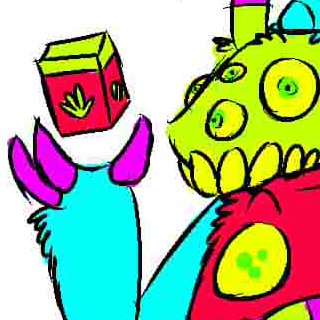 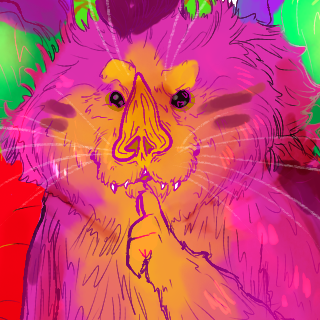