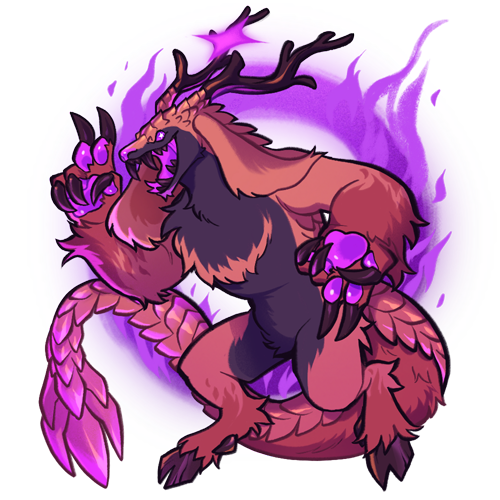 Attack Method: Fearless in many ways, the baphometti walks towards their opponent with their tail covering their sensitive belly. When close enough they do a single strike, commonly ending the life of the attacker.

[Reflexive] Neutral trait
Characters with this trait will sometimes perform things on reflex without conscious thought. Depending on the character it can range from things like covering their head when they see a bird to hitting someone who comes up from behind.
[Pack Mule] Positive trait
This character can carry +4 more than what their stats would normally allow.
[Hothead] Negative trait
Although a character with this trait might be normally friendly, it does not take much to provoke them. If you prod at or question their beliefs, ideas, or otherwise challenge them, be prepared for them to lash out. A character with this trait can have trouble taking criticism well.

The baphometti worship a red large horned baphometti that lives underground. It's said that this great baphometti lives in a burning landscape, a wonderland for the baphometti.

Gods: The great flaming baphometti known only as the Bapvil.

Original Creator: A group of people on a livestream

The baphometti are large mammals that are covered in a segmented armor all around their body. This armor is extremely tough, and even many bullets cannot pierce their armor. On top of their head are long floppy ears, and two antlers that can be short, or extremely long with many branching paths depending on the baphometti. Baphometti do not naturally shed their horns and must thin them down by hand, or from usage. The baphometti have large fangs they use to pierce the skins of innocent animals. Baphometti heavily enjoy the taste of blood and will drain an animal dry before eating the flesh. A striking feature on the baphometti is their eyes, which are five pointed stars.

The baphometti have hooved feet that they use to climb up the mountains they lives on, and their hands end in long claws that they use to dig up shelter and food. The most striking part of all is the tail of the baphometti; this tail is long and ends in armor that spirals into an almost floral pattern, which glows brightly at night. The tails are highly valued, both because of how they look, how the tail glows brightly for many years even after death, and how hard it is to kill a baphometti. While it is illegal to hunt a baphometti for its tail, some still dare to attempt this feat.

The front area of the baphometti appears to be covered in fur, but there is in fact extremely tough skin under it. While the tough skin is nowhere as hard as the armor it still does its job of protecting against sharp claws and weapons. The baphometti are in fact fireproof, and while all of their hair will burn off in a fire, they will suffer very little harm.

Baphometti have no sexual dimorphism, and thus all can give birth. Children are born via the tip of their tails.

The baphometti appears to be a scary beast from afar. Many who meet a baphometti for the first time see them from a distance, looming and looking their way. The baphometti are often mistaken for beasts of legends, due to to the fact that many can be found high up on mountains of snow and around volcanoes. Baphometti are very private, and that mixed with the fact that people will hunt them down causes many to avoid getting too close to anyone they are unsure of.

Where there is one baphometti there is normally a few more. Baphometti always travel in small groups of no more than 5 people. The group normally sets up a shop in their location, which causes great confusion to those who climb up mountains they felt were untouched, only to find a small baphometti shop halfway up it. When baphometti do not feel they are in any danger they are calm and friendly, despite the uneasy feeling many give off.

Baphometti refuse to see someone die near their homes, and whenever they see anyone near death, or one who has run out of food, they scoop them up and bring them to their homes to nurse them back to life. When the person is finally healthy they will help the traveler down from their mountain.

Strangely enough most of the baphomettis who do not live on mountains, and instead live in cities and towns do work in cooking, either at fast food places or those of the higher class. They seem to have an affection of making food for others, and one who has a baphometti friend knows that they will never skimp out on bringing food to a barbecue.

While baphometti are still rare to see off their home planet, there are still a few who live on mountains of other planets to stay away from the hustle and bustle that their planet has become and to stick to their roots. A few other baphometti leave their planet hoping to become the next big thing in cooking, sadly, many end up with their dreams crushed and flipping burgers.

Blood farms: Baphometti have many blood farms on their planet. They have figured out a way to create blood without using animals, making the blood extra innocent. 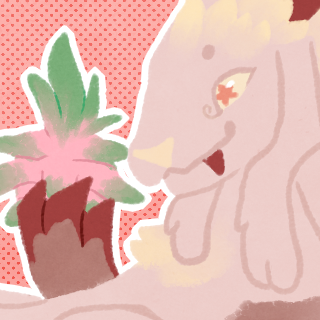 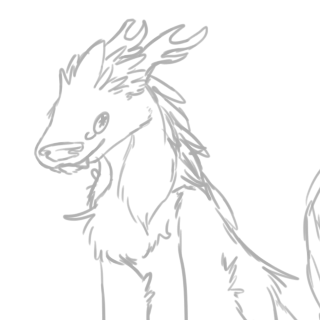 -Back to Species Menu-
< Axeni
Bivouac >