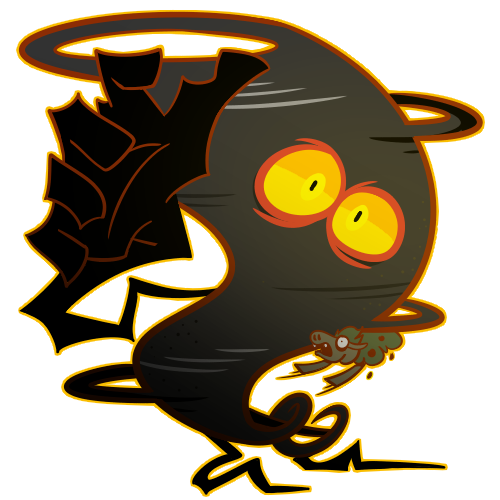 Attack Method: Generally runs away but will grab and throw enemies if necessary or pull them in close and starve them of air

[Private] Neutral trait
Most bogemn will never be seen in the first place, as they prefer.
[Escape Artist] Positive trait
You would be lucky to catch a picture of a bogemn that is more than a fuzzy blur.
[Blame Magnet] Negative trait
Years and years of horror stories have taken their toll upon the reputation of bogemn.

Strangely, one of bogemn's most visual activities is prayer.

Creepy things, hidden in the dark and mentioned in old legends, bogemn are one of the strangest species in the universe. With their constant desire to hide themselves, and their own breathing creating a cloud of obstruction around their bodies, it is hard to observe what they truly look like. Thankfully due to recent recoveries of people kidnapped by bogemn, a better picture has been able to be painted. Bogemn are extremely tall and almost skeletal beings with dark green, brown, and black skin. All limbs are multi-jointed in order to help conceal themselves easier in the event of not finding something tall enough to hide behind. Their eyes are large and incredibly yellow, capable of reflecting great amounts of light. Their mouths are wide and full of round teeth for chewing leaves and wood. Around their body, various tubes used for breathing stick out in a pattern resembling rib bones.

Typically, most of these physical features are never seen due to the phenomena created by bogemn breathing. Bogemn breathing is incredibly powerful and stirs up the air surrounding it, picking up anything light enough. The end result resembles a tornado and obscures the form of the bogemn outside of their eyes. For this reason you will never see a functioning bogemn wearing clothes as the fabric will easily be destroyed or restrict breathing too much and cause death.

Bogemn behavior and personality is quite a rare sight. At best, the most an average person will ever see is their love of hiding and tendency to run away when discovered. Beneath their timid and frightening exterior, bogemn are quite curious. Bogemn find new sights and new people incredibly fascinating, and will stalk and watch them for days. They may even kidnap people and drag them back to their home planet in order to study them better. Generally they mean no harm and will not hurt their captives, although the emotional damage of being trapped on an unknown planet could be considered as such.

There is next to no knowledge of bogemn culture or values and given their tendency towards privacy it is safe to assume that they do not congregate in groups. Bogemn that are born outside of their home planet do not seem to interact much when confronted with others of their species.

For an incredibly long period of time bogemn were widely regarded as abominations or mere superstition. Kidnapping people in the night, sweeping by like a whisper on the wind, eating people alive, all such rumors were spread with great abandon. These rumors were not without facts, bogemn were indeed quite savage back then and would stow themselves aboard ships or even hang on to the outside of ships in rare instances, before popping up somewhere and kidnapping or eating someone.

As greater and greater numbers of species developed scientifically, many old rumors and traditions were abandoned. Bogemn however, could not be so easily tossed away. Speculation and merchandising of the strange disappearances and sightings grew, and, soon enough, an escapee from the bogemn homeplanet would arrive and spread news of the newly discovered species.

Many search attempts were made to find the fabled home planet but to no avail. Scientists with questionable ethics studied bogemn through clever traps, although they always managed to find a way out eventually. It is unknown when exactly bogemn began to integrate into society, although all known cases of bogemn that do not run off upon being spotted have been born off of their home planet.

El is a strange green and brown planet covered completely in a thick forest. It is almost impossible to get any daylight below the thick leaf covering. Regular rainfalls come in the form of fruit dropped from the lower canopy. Records taken from those who have managed to escape the planet after being kidnapped indicate that bogemn have houses and other dwellings, but their description is incomplete. No bogemn has ever lead any trail back to El, nor has any escapee ever desired to return, leading to its location becoming a complete mystery much like the bogemn themselves used to be.

Satellites: Some bogemn are born with incredibly strong lungs and will put large varieties of objects into orbit around themselves rather than the regular sediment, leaves, and the occasional trash. Besides having a larger, more dangerous, and more decorated whirlwind around themselves, these bogemn are identical in personality and form to regular bogemn.

Tornado: Considered birth defects by other bogemn, tornadoes are bogemn born with their vestigial meat eating abilities fully intact. They have excessive cravings for meat and are often cannibalistic due to the lack of other options on the bogemn home planet. They are noticeable by their bloodshot eyes and ragged breathing producing a whirlwind which rapidly dies out around themselves. Tornadoes are the main reason for the continuing negative press and legends surrounding bogemn.

Dread: Through the natural breathing processes of bogemn, a swirling area of wind and various objects picked up by the wind is created around their body. When people of species not adapted to this high air pressure get too close to bogemn they tend to suffer from several ill effects, such as migraines, bleeding, loss of sanity, auditory and visual hallucinations, and eventually death if the exposure is prolonged. Due to the similarity in effects, bogemn are often compared to humans, although this is purely coincidental. Note that bogemn that are dead, holding their breath, or breathing through mechanical assistance are not able to produce these effects.

• There is a communications hotline for people kidnapped by bogemn. Unfortunately, there has been noted to be no reception on El.

• Don't look behind you. 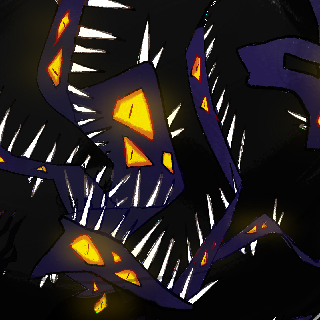 -Back to Species Menu-
< Bloomin
Boog >