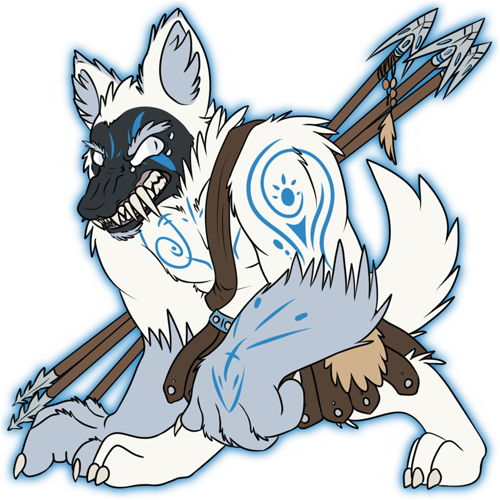 “When I die, I will be in the company of my ancestors as part of the great hunt, I do not fear death.” — An artcuna near death

Attack Method: Pack Tactics, chase the target to an advantageous position, and strike.

[Loyal] Neutral trait
This character is loyal to whoever they are aligned with and it would take a lot to ever drag them away from that.
[Pragmatic] Positive trait
This character is very down to earth about things and sees the universe as it is. They're not going to sugar coat it but they're not going to feel bad about it either. This character does not allow their judgement about situations be clouded by emotions. If they had the choice to save a single loved one and 100 people they would pick the latter.
[Provocative] Negative trait
This character may not be aggressive themselves, but they will often taunt and provoke other characters. While they may have fun doing so, they're prone to angering the wrong person and getting into trouble.

The artcuna believe in The Great Hunt, lead by one known only as "The Master of the Hunt." When artcunas die they believe their spirit join their ancestors in this eternal hunt, and their howls carry on the frozen winds.

Gods: Master of the Hunt

Artcunas are large bipedal lupine humanoids. Powerfully built, they are a tad top-heavy, with a broad chest, and long, muscular arms ending in a pair of huge clawed hands. They stand on a pair of comparatively small, digitigrade legs, that nonetheless have no trouble supporting their massive torso. Artcunas are mammals, with sexual dimorphism, though very subtle for those not attuned to the distinctions. The main one being that females are slightly thinner, with narrower, sharper snouts.

They are covered in a coat of thick, warm fur accross the majority of their body, with the main exception of their head, exposes their darkly colored skin. Their fur comes in a number shades, principally grays and whites, but browns and blues are not unheard of, typically erring on the lighter side. Their skin, by contrast, is usually dark, typically a dark gray, occasionally even black.

They have a set of predatory eyes on their wolfish head. Two main eyes, ringed each by a trio of secondary eyes, these secondary eyes are not quite as adept as their main eyes, but aid in lateral vision, making it difficult to sneak on an artcunas from the side. They have a wolfish grin, full of sharp, meat rending teeth, dominated by several prominent fangs jutting down from their upper jaw.

Artcunas are rarely found without colorful markings, which come in many designs, indicating everything from clan affiliation, personal accomplishments, or even just designs that the artcuna thinks are neat. Their fashion sense, tends to be fairly simple and, for lack of a better term, tribal, with an emphasis on simpler garbs made principally with leathers and furs.

The artcunas have a reputation for being cold and practical. This is not entirely unearned, as the artcuna are indeed very practical minded, wasting little, little of what they gather from the land. They have a tremendous distaste for wastefulness and frivolity and will, at best, react to such things with disgust, and at the worst, with aggression and rage. This influences their stance on technology as well, as they're very backward compared to most species, even their peers on Naturis. They follow the philosophy of "Enough is Enough" and are content to use the proven and the reliable over trying anything new.

The artcuna have a very conservationist mentality, and will react poorly to anyone and anything that they perceive as being harmful to the environment. Most particularly, mass industry, of the sort that involves pollutant spewing factories. These the artcuna respond to with tremendous vigor and hostility, to the point of eco-terrorism.

They are a martial and proud people, with a particular emphasis on hunting. From the time one is considered an adult to the day they die, they are a hunter, participating in the great hunts of the wild beasts of the icey moon. "The Hunt" has great significance to them, and they take it very very seriously, abiding by an extensive collection of rituals and rites to prepare for their hunts. They are aggressive and love to fight, preferring to solve most problems with violence, whether they be beasts or social confrontations, their first response will usually be to toussle with the problem, followed by stabbing it with a spear.

Artcuna are very tight knit, and family and clan is very important to them. Every member of a clan has a role and job to take care of themselves and to take care of their family. Self-sufficiency is considered valuable, but ultimately one's ability to contribute to the clan is of paramount importance. As such, artcunas work very well in groups, particularly when there's a well defined hierarchy to fall into.

They have a grim and practical attitude towards death: It happens, one way or the other. Ideally, of course, they will die in battle against something, which is a moment to be celebrated, but otherwise death is treated with a grim solemnity that borders on cold.

The history of the artcunas is largely unremarkable and the artcunas don't keep much of a written history anyway so most of it is lost, or only remembered in largely mythologized oral traditions. According to traditional legend, the first artcunas was the legendary "Master of the Hunt", who was birthed from the very ice of the land. He wondered the hostile lands of the moon, learning how to survive in such a harsh and unforgiving environment. In time he grew lonely, as none of the other beings he encountered were at all like himself. So he went back to his birthplace, and carved many statues similar to him in the immortal ice of those polar environs, bringing them life with a mighty howl from deep within his breast, thus giving rise to the artcuna.

The veracity of this story is obviously much doubted, and probably completely untrue, not an opinion one should voice in ear shot of an artcuna obviously. The arcunas, however they were born, lived upon the moon for many a generation, pondering about the great green world that they could see in the sky before, telling many a legend about what might inhabit such a place. Soon enough they found out, as they were eventually visited by the malventus. The artcunas responded to this meeting with all the usual grace and tact they possess, and for a time there was a period of hunts for the strange flying creatures, a period which only ended when the artcunas finally relented in the face of the malventus' unyielding offerings of friendship.

With the help of the malventus, the artcuna were able to reach Naturis, where they met the other denizens of the planet, whom they, for the most part, did not care for, finding their collective attitudes to be far too freewheeling and easygoing for them. In particular was their meeting with ignalisk, who, through a combination of being uncomfortable warm and dreadfully annoying singing, sparked a feud that lasts to this very day.

The artcunas mostly got on with life as usual for a time thereafter, content on indulging in the comparatively safer environments of the planet below their harsh moon. As the others busied away with technological innovations, the artcunas clung to their ways, as politely as they could, refusing anything that they didn't feel that they needed. There was one exception, that occurred on an odd day. The other races were puzzling on achieving faster than light travel, to further explore the great above.

The artcunas were largely indifferent to this, but it dragged on as none of the scientists of the other races could figure out the issue. The artcunas delegation grew rapidly annoyed by this, and, against their preference set out to solve the issue themselves, in their direct and blunt manner. They proposes simply "Punching the universe for being dumb and full of stupid rules." Which proved to be the key to determing a method of FTL involving "Punching" Holes in the fabric of space-time. Satisfied with this, the artcuna returned to their simple lifestyle.

The Pack: Artcuna work well in groups, very well. Artcunas in a pack as it's called are unlikely to break or flee when presented with dire circumstances. The more artcuna that are banded together, the more resilient they are in the face of disheartening circumstances, and artcunas will almost never betray another artcuna.

Malventus: They consider the malventus to be "flighty" and "annoying" and find their friendly attitude rather obnoxious. Their first contact in fact involved the artcunas attempting to hunt them down. That said, the malventus' persistent kindness gradually grew on the artcuna, and they're fairly chill with them these days.

Ignalisks: The artcuna dislike the ignalisk for a variety of reasons, but most especially they find their singing very annoying, to the point of intense aggravation. In the interest of cooperation, the artcuna have agreed to stop trying to kill them every time they find them, instead just howling at them, until one or the other decides to go away. The ignalisk respond to this by "whistling" so if one hears an intense cacaphony of whistling and howling, then the artcuna and ignalisk are at it again.

Terrietes: The artcuna consider the terrietes to be "pompous" and "self-important" but otherwise harmless. The exception is with mountain terrietes, whom they generally get along with, empathizing greatly with their gruff no-nonsense demeanor, and freely trade odd moon material they have no use for with them.

Nautalids: The artcunas don't particularly get along with the nautalids, as the artcuna are deeply suspicious of anything that comes from the water. On the other hand, the artcuna consider them rivals in matters of hunting, and they will brave any depths to prove their superior huntsmanship over them.

• Artcunas are very fond of their spears. To the point where they refuse to adopt any other sort of weapon in the majority of circumstances. It's so bad that for the longest time their only option for ranged attack was to throw a spear. They were eventually convinced to use what was essentially a large crossbow...that shot their spears. Their attachment partially stems from the fact that their spears are usually a family heirloom passed from parent to child for generations, or they're a personal weapon, hand-crafted by the artcuna who wields it.

• Artcunas believe that the only appropriate way to die is in combat, typically with some sort of beast. As such, when an artcuna approaches elder age, they will typically gather their weapons and gear and enact a final "Death Hunt" to find dangerous beasts that they will fight, ideally to the death. Large groups of such deathseekers will usually congregate, and these "Death Packs" as they are truly fearsome, full as they are of artcunas who are actively pursuing their deaths.

• Artcunas are known to howl for a variety of reasons. Most commonly to signal packmates in the midst of a hunt, but also as part of celebrations, for mourning, to scare off things they don't wish to kill, or for no reason at all. Artcunas have an instinctual grasp on the differences and nuances of their various howls, but others often have a hard time understanding what each howl means, as they are very similar. 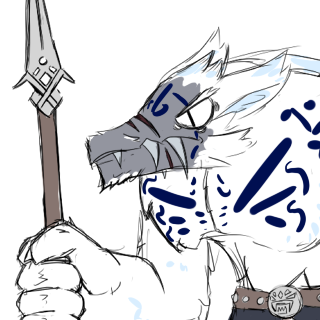 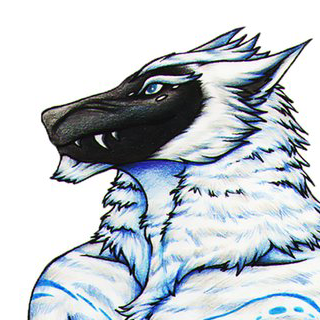