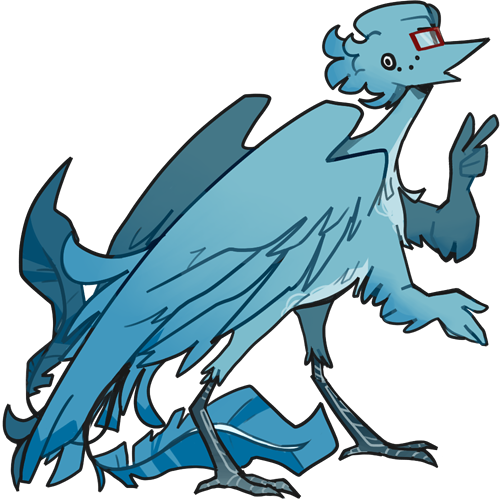 Snapt is unusually short for a tweep, standing at half the height of the average. Snapt has middle-blue plumage with lighter downy on his chest, and a dark cerulean gradient towards the end of his large tail feathers. His legs are dark blue with an iridescent shimmer. He wears dark red, rectangular glasses that connect by a small chain to the sides of his head- where his ear pieces are.

Snapt purposefully holds his wings up, letting his arms be seen in full and allowing him to better emote while he speaks, and write with more ease. He allegedly lets them rest when he's not talking, but seeing as he's almost always seen talking it's hard to see for sure.

On first impression Snapt is loud, brash, and quick to call bullshit. All that's ever seen of him in the public eye is his radicalism, his intense (and borderline incoherent) speeches, and his blunt views on various species' governments. But the passion in his voice when he speaks is contagious, his confidence and conviction has a way of charming others, and to top it all off- his motives are pure. His care for his cause is evident through the heart, soul, and sheer dedication he expends into his work.

Snapt is something of a workaholic. There's barely a free moment in his schedule- and frankly, he likes it that way. Going nowhere has never sat right with him. If he's not participating in politics or making things right then he's pestering everybody in the vicinity about self-care.

Snapt is aware of his passion-bound intensity, but tries his very best to be calm and gentle toward those who might need a more delicate approach. Those close to him are aware this is far from his actual persona, and that he shows he cares in other ways. Just like in his speeches: he's bold, he's passionate, he's loud, he's brash, and he takes no shit. Snapt will fight for you, he'll speak for you, he'll bend the very foundation of society for you. But, if needed, he'll sit down and drink tea with you.

Being a snapped tweep, and due to being rather busy, Snapt isn't fond of social media. Anything worth saying is worth saying in person. Snapt, however, is aware this is the age of technology. His phone and internet persona is necessary to keep in contact with others, make important arrangements, and spread the word. He isn't personally running the bulk of his social media accounts, though.

Formerly by the name of "o0-PrOgress_ive_Ly-ApOlOgetic-0o", often referred to in the past as "Pro", Snapt was a full-time social justice warrior. He'd pen extensive callout posts and essays about injustice and inequality, claiming to care deeply about these subjects despite never truly acting on them. Snapt claims a news story he came across in his feed regarding multiple abuse cases gone cold was the cause of his sabbatical. Charges were hardly up to scale for the severity of crimes done against the victims, some perpetrators weren't even found, some went unpunished by technicality despite obvious mental ramifications on their victims. The injustice pushed Snapt into doing something about it.

He stated he'd be on hiatus, then fell off the face of the planet. When he came back, he had changed his name and rigorously worked his way through law school, hoping to tackle the root of the problem directly. He started as a lawyer working alongside an individual Snapt simply discloses as "Wrrite", a fellow snapped tweep. Snapt worked to defend and ensure justice for those wronged and ample punishment for wrongdoers.

But the legal system is... unfair. Court holds prejudice. The rules are exploitable. After a few aggravating cases in which his clients received the short end of things, Snapt had had it.

Snapt felt like it wasn't REALLY helping anyone- and even when it was, it didn't feel like enough.

After a falling out with Wrrite that Snapt abstains to go into depth about publicly, Snapt quit law. He didn't feel like he was helping people effectively- the law could only do so much within reason. The law didn't ensure good lives for the people effected nor fair punishments for perpetrators. Veterans were left homeless and broken, abuse victims lived in fear of speaking up. Sure, some species' governments are better than others, and law isn't perfect, but something needed to be done.

Someone needed to be the bulldozer to break down the wall, because something had to give, and whether that required a riot or a writer didn't matter. And this thought would be the heart of his campaign.

Snapt started small. Or at very least, his definition of it. He ran for multiple small political jobs in hopes of gaining some sort of leverage on the system. He partook in protests, speeches, conventionsâ€• anything and everything he could to gain some sort of traction. Most notably, Snapt compiled a list of fifty-seven amendments and proposed it to his local office at the time, including a semi-informal thirty page essay containing his thoughts. Snapt has been directly changing lives, and fighting for rights and awareness ever since. No good deed goes without reward, and, overtime, Snapt gathered a large fleet of followers indebted to and aided by his efforts.

This fleet became the foundation of his charity, and the bulk of his workforce. His fleet is now one of the biggest charity organizations in the known universe. However, due to its size and various subsidiaries many won't know Snapt as the root of it but rather recognize the leaders under him- many of which have benefited from Snapt's aid directly, or know him personally. With his contacts, he can offer practically any service a person may need. He's capable of providing jobs, legal teams, community, therapy, financial and medical aidâ€• anything someone might need to get back on their feet.

Progressively Unapologetic: Snapt has made waves in terms of sociopolitical progress and will continue to do so. While his protests are brash and certain to face backlash, Snapt simply won't give up. He'll do whatever he has to do to keep helping people and keep moving things forward. In almost any case- even when threatened by the law he used to regard so dearly- Snapt's conviction finds a way to win out. If not, he'll die trying.

• Despite various incidents and cover-ups regarding Snapt's stance against the notail government, Snapt claims he continues his efforts in advocating for and aiding the Î±-lpha class notails' movement due to an alpha-class notail in his fleet. This alpha-class goes unnamed, seeing as they're often undercover and exposing them may prove to put them in danger.

• Snapt rarely travels alone and often won't be seen without a group of at least 3 to 7 others. While this is mainly for security reasons, Snapt has actually admitted to being personal friends with a majority of his workforce and even has a smaller sub-fleet he considers family.

• When asked about his accent, Snapt merely makes himself more incoherent in reply. Interviews with his employees seem to chalk the reason up to "Culture, and spite. But mostly spite." 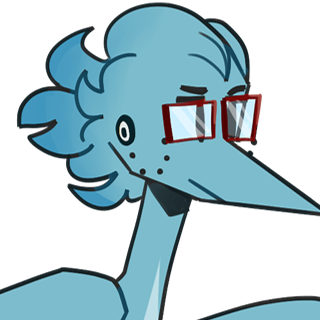