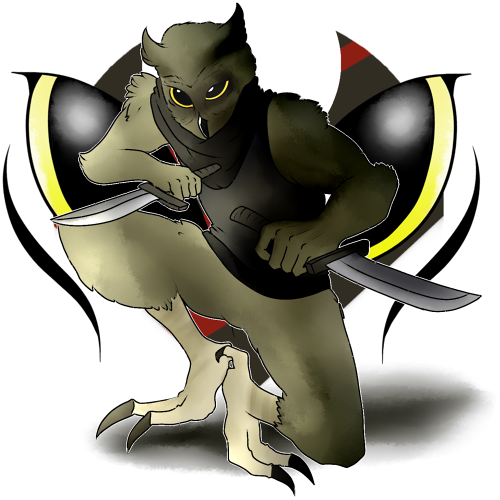 “I can see several fighters hiding in ambush, about a mile ahead of us. They're well equiped, too, so we'd better go around them.” — A Strix guiding a platoon through the jungle

Attack Method: Try to sneak up on the enemy before attacking and make use of anything in the environment they are unaware of.

They are high believers in the Creator due to his connections to clockworks.

The strix are upright with a large, broad head. They have forward-facing eyes and ear holes, though the ear holes are placed asymmetrically on either side of their head. Their beak is somewhat curved, due to their predatory ancestry. Otherwise, they have a rather flat face, which is clearly defined by colouring that is distinctly different from the rest of their body, as well as an edging of specialized feathers which can be moved slightly to better locate sounds. They have eyes that are fixed in place, thus they have an easily rotatable neck for ease of viewing.

They are feathered, with somewhat scaly legs and arms which end in 4 talons, one of which is opposable. These talons are trimmed in all but the most vicious Strix; they make delicate tasks difficult, though are helpful in combat. Small, hardly noticeable feathers on their hands, feet, and beak offer sensitivity and traction, though they are not as touch sensitive as the average species.

Most are winged and can easily fly in 'Earth' gravity, with less success in stronger gravities. Their flight is silent due to special feathers, with faster speeds creating more noise without specialized training. As a result of flight capability, they have hollow, easily broken bones. They have short, fan-like tails for aerial maneuvering.

Most strix tend not to be very strong but are quick and agile even on the ground. The shortest are about 2 ft tall, those being the Micrathene, and the somewhat heavier Glaucidium 'tribes'. The tallest are the far more numerous 7ft tall Strix 'tribe', whom the species is named for. However, the wingless Bubo tribe is heavier, and far stronger than the strix, though they are shorter.

They make a wide range of sounds. They have yellow eyes with black pupils, excluding the ruling Tytonid tribes, who have black eyes with no visible pupils. Generally, they are shades of brown, grey, red, or black, unless otherwise stated in the individual tribe descriptions, with a different colour for the face. Tytonids have heart-shaped faces; Strigids have circular faces.

Incredible telescopic vision, and advanced auditory capabilities capable of pinpointing sources of sound easily. When interacting with other species, they often assume stereotypes to be true for an entire race. An example of this is that all notails battle with powerful creatures. This is derived from their tendency to assume certain roles in society based on their tribe. Most aren't trying to be racist, though racism exists. They will generally stop once corrected a few times, so the longer they have spent removed from the homeworlds, the less they exhibit this quirk.

They are very trusting, if only because it is very difficult to double-cross a race with such high perception. They will almost invariably know if they are being lied to, though are less sensitive to lies of omission and in fact may jump to conclusions in the latter case. Their stealth has led to common careers in espionage, assassination, theft, and piracy on the universal scale, though crime is rare on Strigii considering how hard it is to get away with much.

They are very curious, and quite intelligent, having discovered space flight on their own, but often are too curious for their own good. Thus they may also be engineers, doctors, researchers, etc. They are least frequently seen in more combat-oriented roles, excluding flightless tribes. They make great alarm systems.

They mate for life. Anywhere from 1-12 white spherical eggs are laid by the female all at once, but hatch over the course of months, even years. A female can only lay once in her life. Strix cultures evolved to have all eggs in a settlement carefully nested about a central fire, with a few caretakers and guardians. This is when the custom of writing symbols upon the eggs to distinguish them from each other arose, a practice that continues today. Symbols represent the Strix throughout life, and are often tattooed. Even with modern heating methods, young are still raised together, and generally don't live with their parents until they are around three years of age.

The strix were once riddled with war, genocide and slavery based upon tribalistic principles. This lead to the dramatic decline of the tribes of strix, eliminating four of the six main strix groups: Ogygoptngnids, Palaeoglaucids, Protostrigids, and the highly, though mysteriously, advanced Sophiornithids. Some tribes of the two extant groups of strix went extinct as well. Sophiornithids are believed to have based a number of their achievements on pre-Angelic artifacts left on their planet, possibly from an early attempt at uplifting the strix race.

Most crucial of these was the Ember, a device for the transmission and collection of memories and knowledge, as well as a weapon of nuclear strength power. The Sophiornithids, ailing from both a new pandemic and a temporary alliance of more primitive tribes to destroy their empire knew that their nights were numbered. They determined the best course of action was to provide the isolated Tytonid tribes with the Ember, full of the knowledge and ideas of peace, with the incentive that there was a great evil that would threaten the world, one that would require the unification of all strix.

Thus the Tytonids, believing the device to be divine, embarked on a quest of teaching, and occasionally outright indoctrinating, the other tribes. The last few were threatened into submission with the Ember's destructive potential. Since then, several meritocratic councils govern settlements, nations, worlds, Sectors, and the entire Strix union. In the Space Age, unification has expanded to other species (though it is not forced except with some extremists), as well as their other teachings, such as the value of knowledge and protection of the innocent.

Unlike almost all others, non-destructive Clockworks and other semi-synthetics are viewed with something like reverence. They are considered the ultimate union of the seemingly opposing concepts of Organics and Synthetics. Some Strix cults outright worship all Clockworks, and wish to spread the infection as much as possible.

Tyto: About 5ft tall. Always at least a little gray on a golden and red body, with an ashy face. They almost always wear featureless, though patterned, masks, a remnant of their previous stature as divinely appointed leaders who united the varied tribes of Strigii. The masks are intended to make them appear faceless or tribeless, though eventually became incredibly distinctive features of the Tyto themselves. Often peacemakers and leaders.

Megascops: Known for their piercing shrieks. They are rather bare of feather along their limbs, but they have feathery beards and whiskers with long, black tufts on the end. The megascops have white throat regions and black foreheads. They are otherwise cinnamon in colour with tawny bellies and a red tinge throughout. Often strategists and authors.

Ptilops: Always white of face, with very distinct red eyes. Especially strong of sight, even for a strix. Often doctors or other health-related professions.

Bubo: Wingless, and thus of solid bone. White with black speckles. They are horned, spotted, dusky, and greyish. The splotches are very thick on their belly, and they have some stripes. A proud warrior, with a surprisingly artistic side. They have rather melodic voices.

Ketupa: Wingless, and thus of solid bone. The Ketupa enjoy fishing, and are very good swimmers for strix. An ancestry in the Strigii Navy lead many to become pilots in the Space Age. Brown, with tawny, buff, and rust waves marking their plumage.

Strix: Mottled grey and brown, with white spots as well as white and rust stripes. A little tawny and yellowish, with rust legs and arms. Often scientists, especially meteorologists, considering how important weather is to flight. The 'type' tribe for the strix as a race.

Pulsatrix: Often bespectacled out of an old custom that such blessed lenses revealed the mysteries of life. Not all believe this, but strix tend to hold onto traditions. They have white eyebrow markings and thick belly stripes. Frequently seen aboard ships as counselors or therapists.

Glaucidium: Very small strix, who are frequently highly enhanced cybernetically to account for this; even more so than the other diminutive tribes. A thick black collar separates head from chest. They have pearly spots, red chests, and dark chestnut backs, the rest of the body being a light chestnut. They have rusty stripes and tend to be active most around dusk and dawn, rather than favouring night or day.

Athene: Distinguishable by their spots and long limbs, these diurnal strix are notably good at burrowing and dwell in subterranean settlements. As such, they are wingless, of solid bone, and do not favour night or day in particular. Many great philosophers and trackers came from this line.

Micrathene: Minute desert dwellers with notably long, pointed ears. Common characters in strix folklore, with rumours of magical powers circulating even today. Good navigators considering they only had the stars to guide them in the desert.

Aegol: Absolutely lacking in spots with buff heads. They gained something of a reputation in mercenary and assassin work due to their particularly incredible stealth which even other Strix often can't detect ,excluding the Ptilopsis. This doesn't make them always evil, though.

Ninox: Another wingless race, they are chocolate and brown in colour with rust speckles. They have an ochre belly and white around their eyes. A tendency for an unusual barking noise. They are skilled linguists, good at mimicking other languages. One with particularly advanced mimicking abilities may be known as an "uroglaux."

Asio: They have ears, with length and shape varying from cat-like to rabbit-like. The Asio are usually striped. Sometimes considered cowardly; this stems from their sensitivity.

Ptilops: Always white of face, with very distinct red eyes. Especially strong of sight, even for a strix. Often doctors or other health-related professions.

Bubo: Wingless, and thus of solid bone. White with black speckles. They are horned, spotted, dusky, and greyish. The splotches are very thick on their belly, and they have some stripes. A proud warrior, with a surprisingly artistic side. They have rather melodic voices.

• The Strix' senses allow them to guard the Ember extremely well. Pretending to have a plan to steal it has become a common joke among thieves.

• To say the Kouninis dislike the Strix' cognitive abilities is an understatement. The Kounini make great efforts to befoul the Strix' reputation in the intergalactic community in an attempt to keep them from exposing their various tricks. 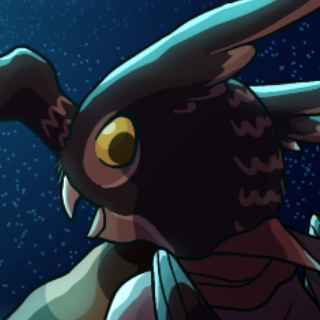