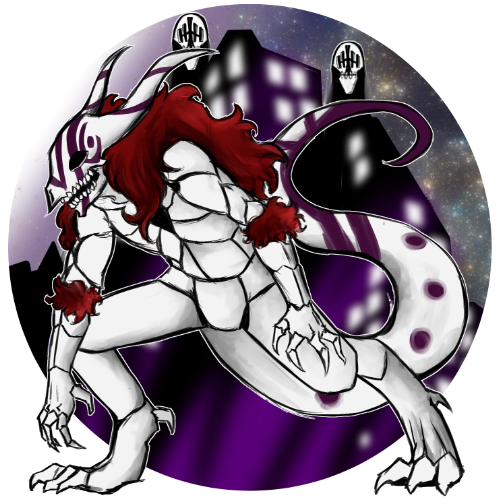 “I was talking to my drakon friend about this vayarasa I met recently, how I thought it was weird for them to have teeth! And he tells me that wasn't a vayarasa! Like, what else would they have been?!” — A very confused aftik

Aglaeca are confused at the concept of gods- only the strong survive in the wastelands, and the weak seek the strong to defend them.

Beastly bipeds covered in white, chitinous armor, the aglaeca can often be mistaken for vayarasa from a distance, sharing their tall stature and thick tails. In fact, the two are sister species, sharing a common ancestor. The aglaeca are most easily told apart from their sister species by the ornate, masklike carapace covering their heads, which sport horns and sharp, pointed teeth that give them a distinctly different silhouette from a vayarasa. Aglaeca often have patterns on these "masks", which they paint on themselves using various scavenged pigments. Most aglaeca also have a mane of brightly-colored fur, which they regularly groom.

All aglaeca have a small, circular gap in the armor on their bodies somewhere, which is where they believe their "heart" to have been. The older an aglaeca gets, the more their carapace segments. Older aglaeca have ornate, patterned carapaces that expose parts of their skin, which is almost black, with a thick, leathery texture. Mimic aglaeca, however, have the same carapace pattern for their entire lives. Commonly, adults have spurs on their heels that they use to kick out at predators coming from behind them. Aglaeca also have a weaker set of inner jaws, which house a set of flatter teeth used for chewing.

Aglaeca are far more like animals than most sentients. Stronger aglaeca often have pseudo-packs of smaller, weaker aglaeca following them around and scavenging off of them. Aglaeca commonly drive off other aglaeca, or even vayarasa, and take over their homes, staking out a "territory" around the home where they will reside for as long as possible, until they are driven off or have consumed all of the resources in the area. The aglaeca drive off all intruders from the territory aside from their mini-pack, which are often seen lounging about the area when they are not following their "leader."

Although the vayarasa and aglaeca appear very similar, comparing the two is an easy way to ensure a quick and painful death, as all aglaeca despise vayarasa, whom return the sentiment wholeheartedly.

The vayarasa keep no written history of their civilization, but have a longstanding feud with the aglaeca for unknown reasons. There have been many fights, scuffles, battles, and possibly even a war between the two species the winner of which is unknown as both species claim to have been the landslide winner. The only recorded history of the aglaeca are faded murals carved into the side of crumbling, derelict buildings. These carvings depict an ancient species seemingly creating a new species, which then appears to become two- one a vayarasa, and one an aglaeca. The aglaeca believe this to mean that some of their ancestors became "corrupted", becoming the vayarasa. They uphold this belief with extreme prejudice, and any individual questioning this belief is quickly and messily terminated.

The aglaeca do not speak of the "obsidian city," except to mention the pillar aglaeca which reside there. They revere and avoid the pillar aglaeca, and no aglaeca goes near the city without a death wish. They claim the pillar aglaeca as the guardians of the city, and claim that severe storms across the planet are preludes to the appearance of more pillars.

Mimic Aglaeca: Mimic aglaeca are a fairly new species of aglaeca, surfacing soon after their introduction to the space age. Mimic aglaeca are named for their appearance: all mimic aglaeca appear similar to other sentient species, albeit darkly colored and with remnants of their armour and masks. A mimic aglaeca is exceedingly skilled at acting like the species with which they share their appearance. Notail mimics and drakon mimics seem to be the most common. Oddly enough, almost no vayarasa mimics have ever been seen.

Feral Agalaeca: Feral aglaeca are near-mindless, hurtling around their territory for days on end in search of their next meal. All ferals are quadrupedal, resembling animals far more than any other type of aglaeca. Very rarely, a feral capable of speech has been found, though these individuals only seem to mock and spit insults. They seem to be eternally hungry, and have earned the name of "Empty Beasts."

Pillar Aglaeca: A single pillar aglaeca can stand from 50 to 90 feet tall, though taller individuals have been documented. They resemble tall, cloaked aglaeca with round, empty-eyed masks. The pillar aglaeca patrol the edges of the obsidian city, standing still for days on end as sentries. Most aglaeca believe that the pillar are the fate of those that live long enough, or grow strong enough, and as such are believed to be very powerful, and are revered by all other aglaeca. Pillar aglaeca are only found on Vacio-Reino.

• Vayarasa/aglaeca hybrids have been occasionally been spotted on-planet, and they are very stable, though aggressive.

• Aglaeca and itzels have been known to trade trinkets.... though this is very risky for the itzel.