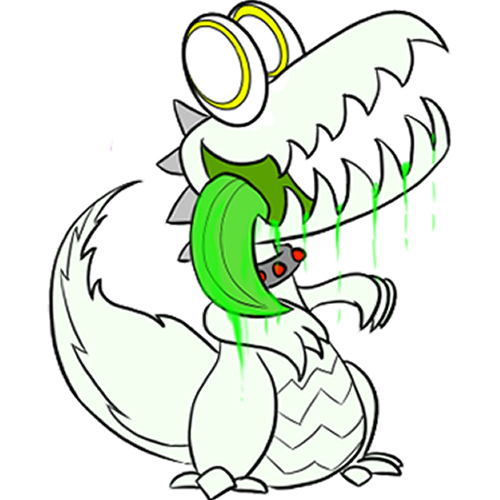 “What is this creepy thing and why is it grinning at me like that?” — A unlucky space traveller about to become lunch

Attack Method: Varies based on species, though most rip and tear into their opponents and eat them alive.

Grgt are short raptor like creatures with large maws and big oval eyes. They come in a wide variety of different colours and shapes, though they always keep the same head shape. Their body consists of a hard exoskeleton that on touch feels like running ones hand over a tooth. Their signature feature are the yellow rings in their eyes.

Grgt mouths are almost always filled with a highly potent acid that drips from their maws and is excreted from their tongues. Their tongues act as a sort of sponge that is extremely soft and squishy when soaked full of acid. Their teeth are extremely sharp and are capable of biting through most things with ease.

Due to their body being made out of exoskeleton, grgt generally are unable to change their facial expressions.

A grgts eyes are always big and oval and have irises that are a single yellow ring. They lack any sort of eyelids and as such as a matter of fact can not blink. A grgt sees the world in heat vision, however if something stands completely still they become almost invisible to a grgt. As such if one being chased by a grgt, their best chance is to stay completely still as it will likely not see them.

A grgt has every organ in its body removed except for its stomach and how they stay alive under such conditions is a mystery to most. Their stomachs digest food at at alarming speed, instantly turning the food into energy which gives a grgt a near endless stomach, once could eat nonstop for over an hour and still be good to keep going for more, as there seems to be no limit on how much energy they can hold in their bodies. A grgt that runs out of energy just stops working, falling over and essentially dying. Their acid slowly dries up afterwards, and if they are not fed while knocked out before their acid dries up they are dead for good.

Grgts forms change a lot based on what species they were based on, some are bigger, smaller, quadruped, biped, the range is rather big.

Grgt are not capable of reproduction.

Grgt in their original states are basically identical to hungry dogs with a monstrous appetite. They have a huge desire to chomp down and eat everything organic that comes in their way, and when no organics are present they will start eating other things, such as metal, AI or even just dirt.

The metal collars around their necks is what regulates who they see as friend or foe. Originally when deployed to a planet they will generally be hostile to everything and anything. If their collar manages to be hacked they can be reprogrammed to see any other species as friend or foe.

Grgt are always extremely loyal and loving to the species that they see as their owners, and will do anything to get their attention.

Some grgt that are made with a higher intelligence due to their origin species, often having parts of their brain removed and replaced with robotics, they continue to act like dogs but with with a sentience, they talk like a dog would if they could talk. Though some do have a higher intelligence that try to break out of this habit. A lot of sentient grgt are working hard to try and remove their status as fauna, which has been hard considering a lot of their species enjoy chewing on lamps simply because "They looked yummy."

Sentient grgt that got their own mind back due to collar reprogramming or a part of their brain overloading and short circuiting, making them suddenly realize what they have become and having a major freakout. Often these grgt just try to kill themselves as quickly as possible upon this realization, due to them knowing this is not what they should be, but not remembering who or what they used to be specifically due to their memories being almost completely removed. As a result most sentient grgt suffer from short term memory loss.

Lucky Grgt: About 8% of grgt are lucky grgt. They come from very intelligent species and have managed to retain some smarts. They have a hard time holding back their ravenous nature but can often do so well enough to not kill people they don't want to, unless they haven't eaten that day. They retain no memory of their past life and can speak in very raspy voices. They are considered lucky since they did not get turned into complete monsters like most of their species.

Once a Species: Grgt are a very unique sort of fauna due to the way to come to be. Rather than reproducing they are created by another species known as the hazcot. The hazcot enjoy experimenting to try and remove all things from species that they deem useless, leaving behind only the best aspect of a species, amplified heavily. They prefer to make grgt to be as destructive, ravenous and hungry as possible, finding them cute and adorable with their big smiles and eyes. As a result the grgt have possibly one of the most subspecies in the universe due to the wide variety of species that they are made out of. Every single species turns out slightly differently due to having different body structures and strengths.

Historically grgt have been seen as nothing but pets or a bad omen should one without an owner show up. When they first appear they are always hostile due to the programming on their collars, but once reprogrammed often get sold as exotic pets, or used as attractions, such as something a gladiator would need to try and defeat in an arena.

They are often seen as a bad omen when first appearing because if often means their creators are or were close to the planet, which could mean that their planet has been selected as an experiment for something horrible.

Lucky grgt have been fighting for a long time to be seen as a species, due to their increased intellect of a minority of the species that have been freed. It has been a hard battle to win for them due to the large minority of the species they are, however they do make a good point that they used to be a species with rights before they were unwillingly turned into monstrocities which has gotten them some sympathy.

• The original grgt design was made from a generic due to it being the perfect way to create a beta design for them which they could then use to expand with when doing their experiments on other species.

• Grgt are always heavily specialized into one sector, and as such will usually excel heavily at two things, usually strength, agility and endurance. Even the beta grgt has extremely high strength and endurance.

• Though a grgt can be made into a pet for the public, if it is not fed it will inevitably have its hunger overwrite its programming and attack its owners.