Home of the Gods 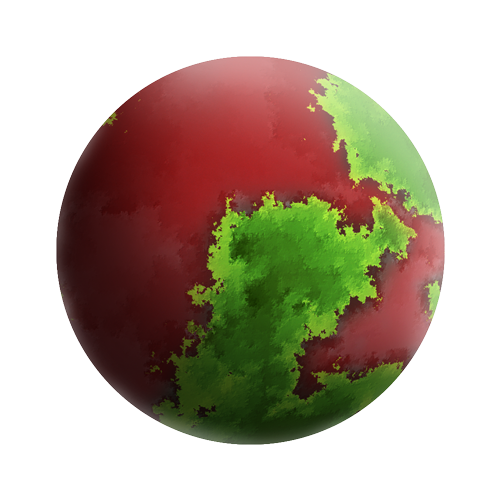 Fauna: Mammals are rare on this planet but otherwise the fauna is quite normal.
Weather: Very hot. Always feels like summer year round in most places.

Danger Level: Safe
Purpose: Homeworld of the putley. A place of worship.

On Maya, the grass may be green but the water and the skies run red. To some species this look is shocking to them, and while the red sky is harmless, drinking too much of the water can make a non native sick. Maya has 9 moons, and in early Maya history each moon was considered one of their great gods, and their star the most powerful of all of them.

Sandstorms whip through the planet, but the people of Maya have figured out the best ways to stay safe, even as the planet flings loose sand at high speeds. The temperature is the same year round, which the reptiles of Maya are glad to bask in. Most of the landscape of Maya is covered sand, where many faunas risk life and limb to live in. Even here the putleys have found a place to live.

Putley history is shrouded in mystery but what is known is that their moons and their star were worshiped as gods. When thoughts on who god, or the gods were the putley were happy to accept each others beliefs, or at least respect it. The putley home world has been in a state of constant peace for its entire history.

Aztech: A large religious area for the putleys, the only people who live here are those who are said to work side by side with the gods, anyone else is just here to pay their respects.

Holy Tombs: The holy tombs are not for those who have been living at one point, but for those gods who have been mostly forgotten. It is said a god with few worshipers will die, and the putleys believe in this. As such when the following of a god has died down they will get a spot in the holy tombs. The putleys believe that gods cannot be revived, much like people, and recommend that those who visit the tomb not pray to them as it would be wasted, but they respect if one does anyway.

Lair of the Queen: Nearly a 1000 years ago, the queen of the putleys feared death and the gods. She escaped on her day of death while her people watched and slithered away in to whatever corner she could find. For hundreds of years, no one could find her. They putleys refused to take her off as being their queen until they knew she had died as their tradition would not allow it. Then one day, they found her, huge and living in a deep cave. They attempted to reason with her, to get her to face her death, but she refuses. To this day, she is still in that cave. To this day, she still is queen, and everyday, someone peeks their head in to the cave and yells down to her "Do not forsaken your gods, they have done you no harm, if you rise up to meet them they shall forgive!" and she yells back up "I have seen the gods! I have seen them all just before I was to be killed! They are nothing but monsters wearing the skins of the gods we believed in, the gods are dead."

• Every 3 years, for 1 month there is a great holy event at the great pit on Maya. It is considered highly disrespectful to come to the event if one refuses to join in and speaking of what happens in the event to non event takers commonly ends in lawsuits. Non putleys can sign up for the event by visiting the putley home world and signing an agreement to not speak of it.

• Putleys are highly interested in the crawlerz, believing that as they have died, and been reborn, they might have memories of the gods from their short death. It's common for a putley to give a crawlerz a free vacation to their home, where they will take care of them and slowly attempt to gain info on their death and any odd memories the crawlerz might have.

-Back to Planet Menu-
< Mare
Mendac-Ium >