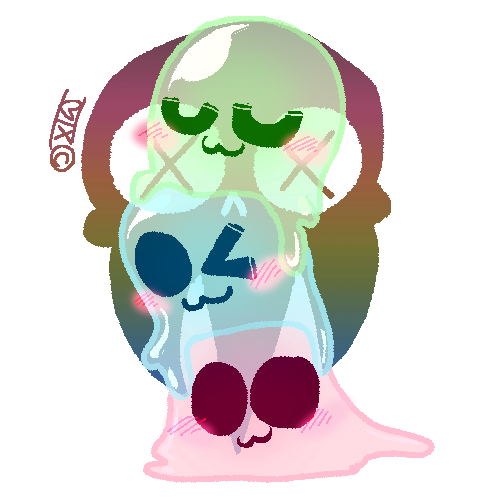 “I can already smell the blood of my enemies.” — Wild Cervous, a vixelsplick captain

Attack Method: Maiming the target then absorbing them while they are still alive.

[Unreadable] Neutral trait
This character shows a lack of expression, or is able to switch from being expressive to having a lack of it. This character can be hard to read for both friends and foe. You may also be unable to see the morale, sanity, and general feelings of this character in the crew logs.
[Cute] Positive trait
Aww, well aren't you just precious! People are easily endeared to this character with their puppy-like look. Their presence is often additionally capable of increasing morale for the crew, assuming they like sweet things.
[Sentient-eater] Negative trait
This character will eat not only characters of their own species but will also eat other sentient beings. The moment that if the character runs out of food they will attempt to eat others nearby. This character may also eat sentient beings even if they have food.

They do not seem to care about worship

The average vixelsplick is a small pastel colored or occasionally neon colored slime with a very endearing but unchanging face, but usually they are inside an AI shell. They will almost always look very similar to the original AI that formerly owned the shell. Vixelsplick are extremely acidic and are capable of melting through metal. Vixelsplick are able to decide when they use their acidic nature as they do not melt the shells they live in.

Their bodies are made of a highly conductive electricity generating slime that allow them to use AI shells as their own "bodies" by hotwiring themselves into the shell.

The vixelsplick are very rude and uncaring. They will have no problem insulting people who slightly annoy them. They also tend to say unsettling things in an attempt to intimidate others, but surprisingly they will be very caring toward friends and will go to ridiculous lengths to protect them. It is also noted that vixelsplicks are brutally honest when asked for opinions or critiques. They have an unsettling tendency to talk about how certain species' flesh tastes like.

Where the vixelsplick come from, they are considered the top predator and a force to be reckoned with. In space, they appear to be nothing but cute little slime balls. This stark contrast to how they are feared by all fauna on their planet, to being coo'd at by aliens is possibly what makes them so bitter and angry.

The vixelsplick's very first sighting happened on a ship where the vixelsplick proceeded to get inside of the ship AI and devour its AI core luckily the crew on said ship where able to restrain it and ever since then more vixelsplicks have stowed away in ships all across the universe.

Living Battery: Vixelsplicks are capable of generating electricity to electrocute others and hot wiring AIs. The electric current is strong enough to paralyze most species and to disable most machines.

• Some believe that vixelsplicks are genetically predisposed to being rude.