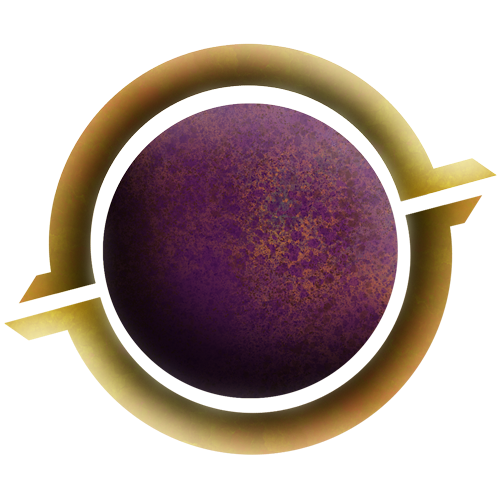 “A wonderful tourist attraction and even better place to die!” — Tourist guide to the universe

The planet itself is a lush purple world with various spattered biomes dotting the planets surface. The soil on Mendac-Ium is noted as being an odd shade of blue, with the flora being noted as being a large variety of colors, many seemingly not fitting together in the slightest. It is not recommended one with sensitivity to certain colors venture far into the forests and jungles of Mendac-Ium, if not for the Fauna, in addition to the flora. In addition the space outside the planet itself is quite strange, as the planet itself is in the center of an immense metallic structure that, when viewed from the right angle, gives off the appearance of a large eye. It is unknown where this structure originates from, as it has only just recently appeared.

Unknown, there are no archived histories of the planet.

Midnight Vales: One of the two largest cities on the planet, Midnight Vales is home to many tegyps and is almost always in a state of afternoon/twilight, despite its name of "Midnight".

Desertion Bluffs: Desertion Bluffs is the second of the two largest cities of the planet, located almost directly next to midnight vales, desertion bluffs is the long running rivals of the town of vales. Many describe this town as being a wonderfully visceral location to live, bright and always sunny, unlike those darn midnight vale-ians.

Flora and Fauna: The tegyp homeworld is named Mendac-Ium and is home to an incredible amount of strange Flora and Fauna. A typical common trait among fauna of this planet is that they commonly have additional limbs, or limbs exaggerated in some way, IE: a larger singular eye, or smaller part. The planet itself however is noted as being incredibly strange, the weather is almost bipolar, going from a torrential rain to a sudden snow in the middle of a warm season as a notable example. The planet itself is a strange mix and mash of biomes in areas, however these biomes all seem to be connected as sub biomes to a single larger biome type, roughly named "Tentale" for the strange octopod like flora that spawns from it, such as Cephalemons, and Pentapeaches. Common sub biomes on the tegyp homeworld are Desserts, Swamplands, and Jungles.

Cephalemons Appearing at first as normal lemons, but as you peel them, it is revealed that the rind of the fruit is in fact tentacle based, this somehow makes this species of lemon sweeter.

Occulaisy A smaller flower, much more common across the landscape, the Occulaisy appears to have a single eye in the direct center of the flower, and releases a sickly sweet scent.

Hels Fingers Small fungal pods in the first stage of their life, hels fingers quickly grow into fleshy egg sac like growths that soon burst at full maturity into a foul smelling tentacle like fungi that latches onto anything nearby permanently. If the fungus is removed it leaves behind seeds that will eventually fall off to begin the process of life once more.

Toidi Flowers Small, white flowers, seemingly normal at first, but soon reveal themselves to be able to imitate speech, as if whispering directly to you. Toidi Flowers begin speaking kindly and quietly but soon begin to grow louder and louder as the helpless victim becomes more and more distressed, eventually reaching a point where the flowers themselves warp into horrifying face like forms and sapping the victim of life through their roots.

Crimsonias Delicate flowers renowned for their beauty, crimsonias exclusively grow in locations in which something has recently died, many believe crimsonias to be an accurate way of determining a location as unsafe, and are a common gift to tell that special someone how much you wish they were dead.

Sonikra A creature that can only be described as a writing black mass of tentacles and killing intent, the sonikra's true body is an unknown, as they always either glide silently through their domains, or claw their way through on whatever body part their body may consist of in addition to tentacles. These creatures are commonly seen with multiple eyes, massive jaws that protrude from their body, and humanoid, as well as sometimes alien, arms protruding seemingly from underneath the tentacle mass. These creatures are highly aggressive and not to be trifled with, threat level high.

Craflants Crustacean like creatures with large plant like growths on their heads, these creatures disguise themselves as plants to lure unsuspecting prey into range.

Katastrofi Bird Named purely for its bird like tendencies, this flightless humanoid creature appears to be wearing a mask with three eyeholes at first glance, these holes are in fact its actual eyes, and the mask a strange disguise for its very beak like face. This creature is a highly aggressive predator. When this creature opens its mask like mouth, it's described as opening slowly, as if it has to force its own mouth to open and rip itself open. This process appears excruciatingly painful, followed by a horrifying screech filled with pain, anguish, and pure malice.

Katastrofi birds come in three appearances, the smaller and faster male form, the larger and more defensive female form, and the even larger and terrifying Katastroffi Queen.

• The list above is but a small selection of the horrifying flora and fauna of the tegyp homeworld.

-Back to Planet Menu-
< Maya
Merciaa >