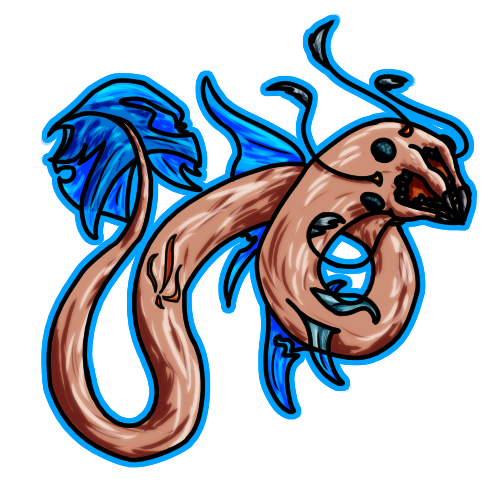 “Did someone just grab my tail?” — A fowthick 'victim'

Attack Method: Drags opponent towards it with 'claws', before trying to gnaw on the opponent, or tries to constrict opponent with body.

A fowthick is an aquatic creature that somewhat resembles a fish. It has a long, serpentine body, covered in long, dull orange scales. These scales can be extremely shiny in the sunlight. A fowthick has four dark blue compound eyes, which, while functional, are rarely useful. Instead, it has four long antennae, tipped with dull blue 'fluff'. These antennae are mostly used to detect vibrations in the water.

The most noticeable aspect of a fowthick's appearance is the four 'claws', around its mouth. These 'claws' are mostly used to drag prey towards it, and are actually fairly strong. Its mouth is somewhat leech-like, and filled with small, mostly-blunt teeth.

A fowthick has ten fins in total - four on four sides, close to the 'head', two on two sides that resemble dorsal fins, and four tail fins. These fins are generally torn, but a fowthick rarely notices this. The fins are all large and a translucent blue in males, and more 'flat' and an opaque pale yellow in females. Rarely, a male may have a female's colours, or vice versa, but one can always tell the gender from the shape of the fins. Female fowthicks are also slightly larger than males, generally by a few inches. Fowthicks, in addition to ripped fins, may also have various scars.

Fowthicks are usually aggressive and territorial. The sight of a cluster of fowthicks fighting over a piece of food that has already been taken isn't particularly uncommon. It is why fowthicks are commonly seen with scars and torn fins, occasionally to the point of having almost no fins left. Fowthicks' territory often overlaps with other fowthicks, leading to more fights when they accidentally meet. Like most solitary fauna, fowthicks tend to only meet intentionally in order to breed.

Fowthick hatchlings are raised for six months by the father, before being chased out of the fowthick father's territory. However, until they are a year old, fowthicks will generally live near the edges of the father's territory, before swimming off to find their own home.

Fowthicks are often aggressive towards anything new or unfamiliar, even if it's just a new pebble. They will 'tap' at it with their claws, and often try to gnaw on it. If it doesn't move, a fowthick will generally stay near it for a few days, circling endlessly around the thing, before eventually getting used to it. However, if it moves, they may proceed to 'biting' it with their claws, or try to drag it away. If it retaliates, the fowthick will then start to attack the strange thing. Fowthicks are not as strong as many expect, so it's entirely possible that the fowthick won't manage to leave a single scar. (But perhaps a small scratch.)

Surprisingly, fowthicks can get used to sentient species. If they do not retaliate, and somehow allow it to get used to them, as well as feeding it, an alien can befriend a fowthick quite well. This is probably part of what turned them into popular pets to keep in aquariums, as long as one doesn't mind having a large fishtank with a single 'fish'.

Domesticated: The domesticated fowthick is the variety generally kept as a pet. These fowthicks are much more docile compared to their wild counterparts, although they may still circle around unfamiliar decorations for weeks, and still need to get used to their new owner. Their scales are a brighter orange, and their fins may resemble a betta's fins, depending on the individual. Their antennae are covered in fluff, and their 'claws' are duller.

• A fowthick's blood is a bright orange colour.

• Fowthicks come from a planet with high metal content in the water. They seem to prefer metallic water, but, surprisingly, can survive in just normal water.

• Fowthicks seem to have spread all over the universe, although some 'wild' fowthicks are simply descended from released domesticated fowthicks.

• Fowthicks are edible, and taste incredibly similar to tuna, if tuna were made of metal.