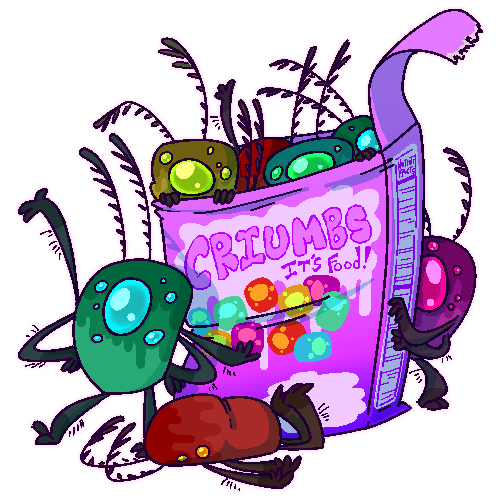 “First I make dinner, then I make life itself!” — Packaging Slogan

Attack Method: They bite their target with their small, almost invisible mouth.

[Parental] Neutral trait
This character cares nothing more then to watch out for and take care of other characters. They commonly end up the "parent" of most group and do their best to keep everyone in high spirits. Sadly some characters may not enjoy this at all or this character might mismanage their own personal time due to caring for others.
[Bloodhound] Positive trait
This character can track smells extremely well and from very far away. More often than not they are able to track the location of the source with ease.
[Picky Eater] Negative trait
This character will only eat things from a personal list. Whether it's all meat has to be seasoned with a specific spice, or they will only eat certain plants when prepared certain ways, this character is willing to starve themselves when they don't get to eat the way they prefer to.

Criumbs are small arthropods that are mass produced as snacks for other species. They have two legs, four arms, two antennae, and one thorax with one large eye and several small nonfunctional eyes surrounding it. Their thorax can come in a wide variety of shapes ranging in rarity from the common square to the almost mythical bumpy lump. Unlike many arthropods, the chitin of a criumb is soft and squishy all over excluding the three fingers and toes on the ends of their legs and arms. This squishiness comes from the pulpy flesh found underneath the thorax which is stuffed with finely diced food particles, flavoring, and food dye. Criumbs passively dissolve this mix while conscious, depleting it entirely in approximately thirty years. The food dye within the mix permeates throughout the entire body of each criumb, staining them a main and secondary color with their appendages a shade darker than their main color. A criumb without any dye has a teal or olive color to their whole body.

When considering the anatomy of criumbs, it is important to note their artificial origins. Criumbs do not have many complex organs, and some of the ones they do have, such as a second stomach that is unconnected to any digestive tract, are seemingly useless. Bodily mutations are common, especially warping in thorax shape or conjoined thoraxes. From creation, criumbs come wrapped in colorful packaging with their flavor, serial number, a nonsense list of ingredients, supposed origin story, and various eccentric advertisements stamped upon it. Included inside the packaging is a group of dehydrated criumbs and a small piece of green paper which may have a joke or a recipe stamped upon it. Occasionally, one or more of the inclusions may be replaced by some bizzare object or note due to an error.

The clothing styles of a cruimb tend to be quite simple. Criumbs are especially impressionable after being released from their original packaging and usually base their taste in clothing around one or two garments the people around them are wearing, whether they appropriately fit their body or not. As an exception to this, especially devout criumbs wear tailored pieces of their packaging or nothing at all to adhere to their 'natural' philosophy.

Like a box of chocolates, criumbs have a wide variety of personalities and cultures. Sour, sweet, salty, bitter, and savory criumbs tend to hold a temperament similar to their respective taste. Despite this, a large number of criumbs do not fall into these categories or do not feel such influences upon their behavior.

From the first time they open their eyes, criumbs recognize their place in society. They instantly memorize the information on their packaging and take its few morsels of information to heart. A criumb family consists of all the criumbs that came in one package, identifiable by their serial number. Usually criumbs take their last name from one of the slogans on the packaging and their first name from a particular food. The flavor of a criumb is treated much like a race, even in terms of prejudice. The various flavors are too many to list here and constantly increase, however the most important factor is that the current lowest class is banana flavored and the highest class is bubblegum flavored. Thorax shape has no influence upon the societal standing of individuals, even the most horrifically mutated or blessed individuals are treated the same.

Criumbs feel best among other criumbs and have a strong sense of family. Even so, they still have a large number of interspecies relationships. Criumbs hold no great grudges against species that frequently snack upon criumbs, but in contrast, they despise other edible species who they feel encourage further devouring of criumbs. Business centered species are treated well by criumbs even if both parties usually end up just looking to make a quick buck at each other's expense. War centered species are looked upon with great disgust by criumbs for the issues surrounding criumb history and conflict. Science specialized species hold a mutually beneficial relationship with criumbs where details of their history and anatomy are exchanged for a variety of small favors and points. Diplomacy based species are treated with great revulsion for the past, present, and future rights issues surrounding criumbs that those species ignore. Entertainment focused species are given no special treatment.

The origin of the criumb species is shrouded in mystery and speculation. There are a few hints towards the truth from the occasional blurb on some of the packaging criumbs come in. The currently accepted theory is that a reclusive bioengineer, referred to as 'The Creator' was attempting to create life when they became distracted by hunger and accidentally mixed their formula with their dinner for the day. Shortly after finishing their meal, they came to realize the vast wonders of this new lifeform beyond a tasty treat. The creator made enormous factories, refining and creating criumbs enmass so that many more could enjoy their delights. Despite what the theory says about The Creator's faults, the criumb species loves them greatly regardless. With no trace found of any lab or factories of the sort, it is unknown if the theory is true or if The Creator is still alive at this point.

While the origin of criumbs is a mystery to this day, their first few appearances among other species are quite well documented. The first encounter began when a large warship passed through open space between planets and encountered a large missile-like object. After confirming the ship was not about to be blown up, the floating object was pulled inside and the crew opened it up. Inside were tightly packed boxes of colorful and sweet smelling food stuff, those being, the criumbs. Famished from the tense conflicts they had been engaging in, the crew dug into the mysterious rations. When most were eaten, a sceptical navigator sat by, observing the feeding frenzy only to hear a faint voice. Running over and grabbing one of these snacks, the navigator found it to be staring straight back at them. As a kind hearted individual, the navigator saved this small creature and raised it, while vowing to save more of them. Sure enough, more packages were found floating in space, and even some began appearing in shops, sold by an anonymous source. These packages grew and evolved alongside the burgeoning species, eventually becoming the small treats known around the universe today.

The increased number of criumbs in the universe brought ever larger amounts of scrutiny to the slips of paper included inside. If the origin theory was true, there was a chance the creator might make another mistake and include one or more of their formulas. Soon enough the speculators were proven correct when the instructions for a groundbreaking herbal balm was included in a package. This stroke of good luck would however turn sour as people began warring over the packages and their contents. Enormous battles with casualties in the hundreds of thousands were waged in space over boxes no bigger than five feet cubed. As groups opened, traded, and bought these packages in droves, the criumbs inside were discarded over and over. This proved instrumental in growing the population of criumbs to a sizable enough amount for them to be granted rights, and with them, the ability to intervene and claim these findings first, preventing the wars of the past.

In the current age, most of these conflicts have settled down. The Peoples Table has become the official governing body of criumbs and takes a neutral approach to most issues, focusing on collaboration and compromise between the disparate groups of criumbs. The religious and business groups such as Cursed Receipt and Gold Leaf respectively are much more aggressive in their approaches towards others but are not much worse than what other species do for the sake of such matters.

Among the texts preserved by the Cursed Receipt there are a few that are held to high regard due to their wisdom or possible hints at bioengineering breakthroughs. These have been publicly uploaded below.

Gag For Thought 'What do you call a notail with no arise? An H-Class!'

What's The Deal With Generic Rations 'Every day I go onto a commercial ship flight they always have these stupid little free meals. You get handed one and the first thing you do is ask yourself if a rock would be more edible. It certainly would sink less in your stomach. So you're sitting there, contemplating life, questioning every little choice that led you to this thing, when your stomach grumbles. Naturally, you take a bite without even a second thought. Blech. Was that a bit of wrapper? Nope. Not wrapper. Pretty soon you're in a hospital and your fare's doubled, but hey, let's keep giving out these things.'

Rosewater Meatloaf 'One of my favorite recipes. I used to make this with my grandmother all the time for dinner. The rose water doesn't do much in the way of taste, but it really brings out the smell of the food in a way regular meatloaf does not compare. Ingredients: twelve pounds of raw blood mantis meat, five and a half mapples, one onion, fifty gallons of water, a whole bag of sugar, half a cup of sulfur, two cups of ammonia, a cup of ketchup, one unlimited breadstick, a dash of salt, a pinch of pepper, five strips of seaweed, five quarts of turpentine, a half a gallon of ecton plasma, one lime, a teaspoon of pupzel tears, Edesia V347, a signed copy of Not Quite Master Class But Good Enough by Bob The Baker, a pound of volkronn bone, some dirt from Mulsipia, the entire collection of O-class novelty pen ink, two tablespoons brown sugar. Preheat the oven to six hundred degrees kelvin. Mix dry. Mix wet. Mix the mixes. Bake for three hours. Enjoy.'

Grack: Gracks are a brittle, thin, and cracker-like criumb with a rectangular shape and a taste similar to elf. Due to the controversies over such a flavor, the line was discontinued, leaving only the small bits of their original sizable population.

Stasis: When a criumb becomes excessively dehydrated, usually under forty percent water content or a week without drinking water, they will become comatose. During this state they age at a tenth of their normal speed and do not require food or air until they are given water again and revived.

• The creator of the criumbs has a particular fondness for pasta.

• Although the amount of material used for flavoring is only around fifteen percent of a criumb's body mass, they are still legally considered to be that food for regulatory purposes.