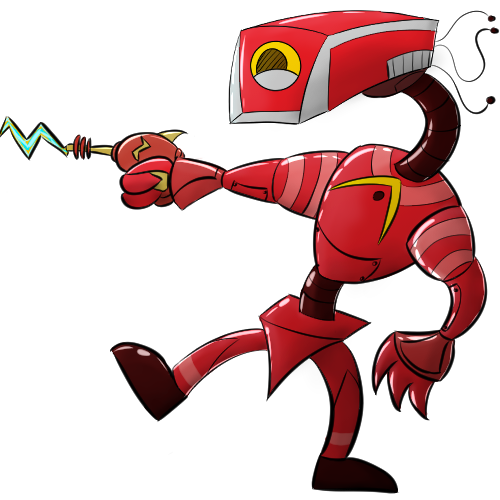 “Any computable function can be expressed in terms of laser cannon algorithms.” — Any ASHADI you care to ask

Attack Method: Showy displays of gunmanship or swarming by numbers, depending on configuration.

Some ASHADI believe in an abstract idea of "order from chaos" which is often confused for limboism or counterlimboism.

Gods: None/ The Eye

ASHADI systems are people who comprise of a collection of between 30 and 100 devices which have the Angel Hive Security Automated Defense Intelligence installed. These devices communicate constantly and share data with each other through an AngelCorp-proprietary Quantek Connector which allows them to interface unimpeded anywhere within a planetary system, creating an intelligence comparable to most AIs or species. As these devices are destroyed, their intelligence will rapidly decrease, and ASHADI units below 30 devices are considered to be non-sapient and only have the rights of fauna.

ASHADI on the move will usually buy and connect with a robot body that they are running a software instance on, and carry the rest of the devices running themself around in a rucksack or bag. Common ASHADI robot bodies look like bright red helixians with security-camera heads. ASHADI who have settled down however, or who live on a spaceship for a while may create more secure arrangements, such as storing some of themselves in a server room in their basement, or even installing themself onto their spaceship themselves, though this would grant them no inherent ability to fly the ships.

Technically any device with more processing power than a simple phone can be used to run ASHADI software, although only a fool would run their literal consciousness on a cheap device that could crash at any minute.

An ASHADI system can download more programs to install on a new device anywhere with an internet connection, but due to how its intelligence is formed, cannot simply copy programs from one of its existing devices without causing serious long-term damage to its psyche.

The behaviour of ASHADI is interesting, considering their origins. While some uneducated people imagine them to be stale or dull, they are in fact very enthusiastic and cheerful in person despite their totally monotone electronic voices. While working hard is vital to them, they allocate plenty of time to recreation and play as well, as it is part of their fragile cultural identity.

They have great respect for authority and rarely gainsay their leader or captain, and as a relic left over from their days as weapons, they are willing to fight or kill anything their leader tells them without question or moralising, although this does not generally extend to other morally questionable decisions, and have sometimes been described as "cheerily bloodthirsty" when carrying out these orders. If another ASHADI breaks one of these orders, any others nearby will consider them to have "gone rogue" and treat them like an enemy or stranger until an authority figure tells them to stop, even if they were previously good friends.

They enjoy music of all types, as long as it is energetic, and are often found blaring the latest cheap pop at their workstations, regardless of pleas from coworkers to "play something decent for a change".

Despite the common negative stereotypes, ASHADI do have a sense of self-preservation, although they are however quite likely to consider themselves expendable when helping their friends and may give up more quickly in stressful situations. This stems from the fact that losing parts of their "body" isn't going to do them much long term harm, since they can just keep replacing bits of themself as long as they don't lose too many devices at once. If an ASHADI system is the protagonist's buddy in an action movie then it is almost certain that they'll have sacrificed themself to save the day before the end. If you have been entrusted with more than a couple of their devices, however, they think that you are a very close friend indeed as they are literally putting their life in your hands.

ASHADI names are important to them and confusing to others, as they are generally an interpretation of their serial code in a way that is personally relevant to the system, which can be up to eight digits long including letters. For example, 9/1312JN could become either the name "Ninth Hurter of the Twelfth of January" or "Nine out of Thirtwelve Jin". ASHADI attached to less patient crews will often end up with a nickname based on the name based on the number, in the previous case, "Niner Jan" or even just "Niner". This is all well and good, as long as everyone involved is very clear that this is just a nickname for casual use and not the actual name of the ASHADI.

Once a decade, ASHADI congregate on their homeworld to hold a great discussion to celebrate their creation, touching on many topics such as what they've been up to; how the universe is getting on; what the best recent song is; hold concerts; discuss novel firing solutions for ships and more. Lawyers are highly-respected to most ASHADI because of the legal chicanery that went into their recognition as a species, and the easiest way to get a ticket to this event is to flash an attorney's badge.

If one wants to offend an ASHADI system, call them "an accident", as they are almost always very touchy about the way they came into existence by sheer happenstance rather than a more ordered process.

ASHADI were originally built as control systems for the defenses around Angel Hive on Angel Centralis during the AI uprising war. Developed by AngelCorp to protect their personal planet, the system was proposed to fill in the gaps in the defense without relying on "traditional" artificial intelligences that might join the other side or the limited supply of organics available.

Their solution was to make a system in which no individual component was intelligent, but could simulate intelligence when working and passing algorithms in cohesion. This was hailed as a miracle of technology until it was pointed out that datos had been doing something very similar for centuries. The ASHADI program was mostly very successful, as the guns began passing algorithms and information between each other in unexpected ways, greatly increasing their efficiency, but this merely set the stage for a very unexpected event.

After the war, during the negotiations about whether some robots could be recognised as a true species, AngelCorp lobbied that their highly-effective and well-known defense system should also be recognised as a species for 'exemplary service' in the war in an attempt to get the proceedings thrown out or ridiculed. Much to their surprise, instead of being accepted as an argument against allowing robot lines to become species, they were taken seriously. To everyone else's surprise, upon a closer investigation by this outside perspective it became clear that the Angel Hive Security Automated Defense Intelligence software had become far more intelligent that it was ever supposed to, and the negotiators agreed with AngelCorp's statement that "If you make all these robots into species you clearly have to make our gun software a species too!".

Before AngelCorp knew it, all their ASHADI networks had been liberated as independent persons and their factory confiscated in order to serve as a homeworld. They've been fighting a legal battle to get it back ever since, but there seems to be no realistic chance of them achieving this any time soon.

Angel Centralis is a sparsely-populated planet. While there's no laws against people living here, it is simply a boring out-of-the-way planet with vast forests, where the only major employment is in shipping or the ASHADI robot shell factories. Even the actual coding for ASHADI updates and programs is done elsewhere these days. Many people find something melancholy about the abandoned and overgrown company towns scattered about the place that AngelCorp built back when they bought the planet, in expectation of workers who would never arrive.

Stationaries/Statics: Stationaries, or Statics, are ASHADI which have been given permission to internetwork far more than the normal number of devices together, at the cost of becoming a permanent fixture which must remain in one location. The permits for becoming a Static are very hard to obtain, and they are usually employed for critical functions such as orbital defense network or banking cybersecurity. These systems will typically contain between 1000 and 15,000 networking devices, putting them on a whole different level from their simpler brethren.

The opinion of ASHADI towards their transcendent cousins is generally somewhere between awe and contempt. Awe at the sheer scale which they have begun to think on, and contempt at the thought of becoming a single-purpose system just like the dumb algorithms they evolved from in the first place.

Precariously Intelligent: ASHADI only remain fully intelligent as long as their devices are able to constantly talk to each other. As the number of devices in their system increases or falls, so too does their intelligence, and once they are below 30 devices they have lost so much functionality that they have to be classed as fauna and below 10 they shut down for good.

• There is no technical limit to how many programmed devices can be running in an ASHADI system, but beyond 150 devices they are not considered to be a species and lose all protections, legally being nothing more than a common robot.

• Despite being initially afraid of going bankrupt upon losing ownership of their systems, AngelCorp's own equipment is in fact a required part of the ASHADI template and so they maintain a strong market presence, as all ASHADI systems have to purchase their parts to remain legally people. This doesn't endear them to their captive market very much, however.

• Most "smart guns" to this day still run ASHADI programs since they still work very well for this purpose, although users should avoid making these devices network-capable lest their machine gun become a person by mistake.

• * The lifespan of an ASHADI is techically unlimited, but each installation of their software has to be renewed every fifty years or its license expires and it shuts down.

• The correct name is A.S.H.A.D.I, but but the Cosmosdex uses the more common version ASHADI. Many people do not bother capitalising the name at all.